Activists in Poland equate terminating a pregnancy with Nazism 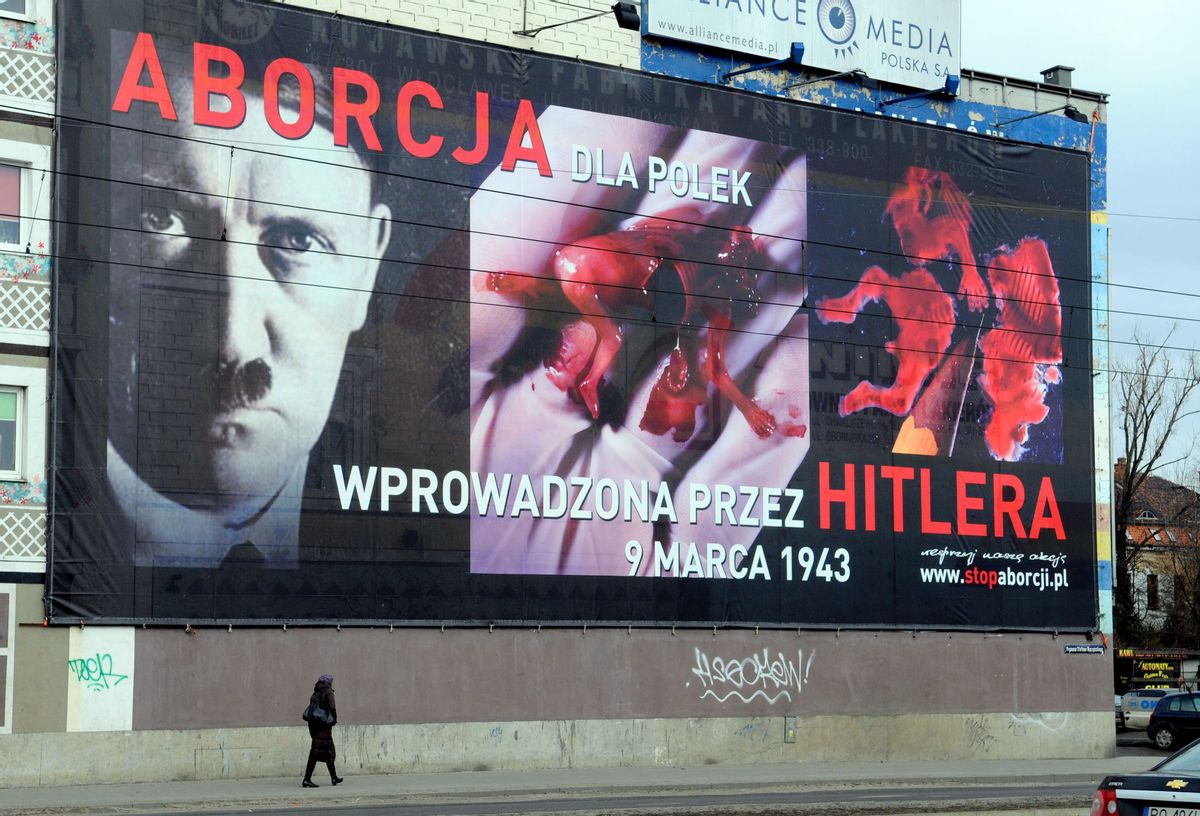 A passerby walks under a huge billboard hung by an anti-abortion group, with images of Adolf Hitler alongside that of a torn, bloody fetus in the western town of Poznan, Poland, Wednesday, March 3, 2010. The inscription on the billboard "Abortion for Poles: introduced by Hitler, March 9, 1943." refers to the upcomming anniversary of the introduction of legal abortions in Poland by the Nazi occupying forces during World War II. Today abortion is illegal in Poland. (AP Photo/Remigiusz Sikora) (Remigiusz Sikora)
--

A familiar face is once more casting its sinister shadow upon the streets of Poznan, Poland. In the run-up to International Women's Day next Monday, none other than Adolf Hitler personally has been drafted from beyond the grave as a Polish anti-abortion campaign's new poster child.

The 200 square meter poster, which has so far appeared only in this western Polish city of half a million residents, depicts the Führer's brooding countenance and clipped mustache alongside graphic photos of aborted fetuses. "Abortion was introduced for Polish women by Hitler on March 9, 1943," it reads.

The poster is the brainchild of the Polish anti-abortion group Fundacja Pro. In a statement to Reuters, campaign organiser Mariusz Dzierzawski said: "It is our duty to fight for the rights of murdered children. Abortion is a crime and drawing such a parallel is absolutely justified." He plans to hang his Hitler posters in thirty other Polish towns over the coming days and weeks.

In this traditionally Catholic country where opinions are divided more or less evenly about amending Poland's strict anti-abortion laws, not everyone appreciates the campaign. Many Poles are upset at seeing Hitler's face on the streets of a city that suffered immense losses in World War II (Heinrich Himmler delivered his infamous speech on the Final Solution at the Poznan Castle). Many are also troubled by the hypocrisy of the campaign itself. While Hitler did encourage Polish and other "non-Aryan" women to abort their children, he was anything but a champion of abortion rights in his own society and actually handed out medals to German women who gave birth to four or more children. "This is sick... Fascism, Stalinism... prohibited abortion, often on pain of death, so bans on abortion are strongly linked to totalitarianism," Magdalena Sroda, a professor of ethics, told the Polish daily paper Gazeta Wyborcza. Adam Boniecki, a Catholic cleric and chief editor of the Tygodnik Powszechny in Cracow, expressed his disgust at Dzerzawski's Hitler comparison and the campaign poster, saying that "a line has been crossed."

Will the poster change many Poles' minds? We shouldn't underestimate the factor of basic common sense. Hitler simply doesn't fly as a "pro-life" spokesman - ironic or otherwise - in a country that was the site of the Auschwitz-Birkenau, Treblinka, and Sobibor extermination camps. Nazi plans called for the enslavement and gradual annhilation of the Polish people. From 1939 to 1945 Hitler and his henchmen murdered close to six million Poles (nearly a fifth of the pre-war population), divided into roughly equal measure between Catholics and Jews.

But Dzierzawski has bigger concerns than a sense of historical proportion. He recently told the Gazeta Wyborcza that previous "soft campaigns" against abortion had so far had little impact on opponents of existing laws, which prohibit all abortions except in certain cases of rape and incest, severe birth defects, and danger to the life of the mother. Polish feminist and pro-choice organisations traditionally use International Women's Day as an occasion to get their message across, and his organization now needs to reach for stronger measures to maintain the status quo. "We as abortion opponents have no choice," Dzierzawski said.

But Dzierzawski really doesn't have much to complain about. In fact, he can be deeply satisfied that, thanks to his campaign and the moral authority of the Catholic Church, Poland has one of the lowest official abortion rates in all of Europe, counting fewer than 300 procedures in 2009.

It all depends on how you count, though. Polish women's groups estimate the number of illegal back alley abortions at over 180,000 per year.