Bickering couples, celebrities making fun of each other, Madonna and Larry David. What's not to love? 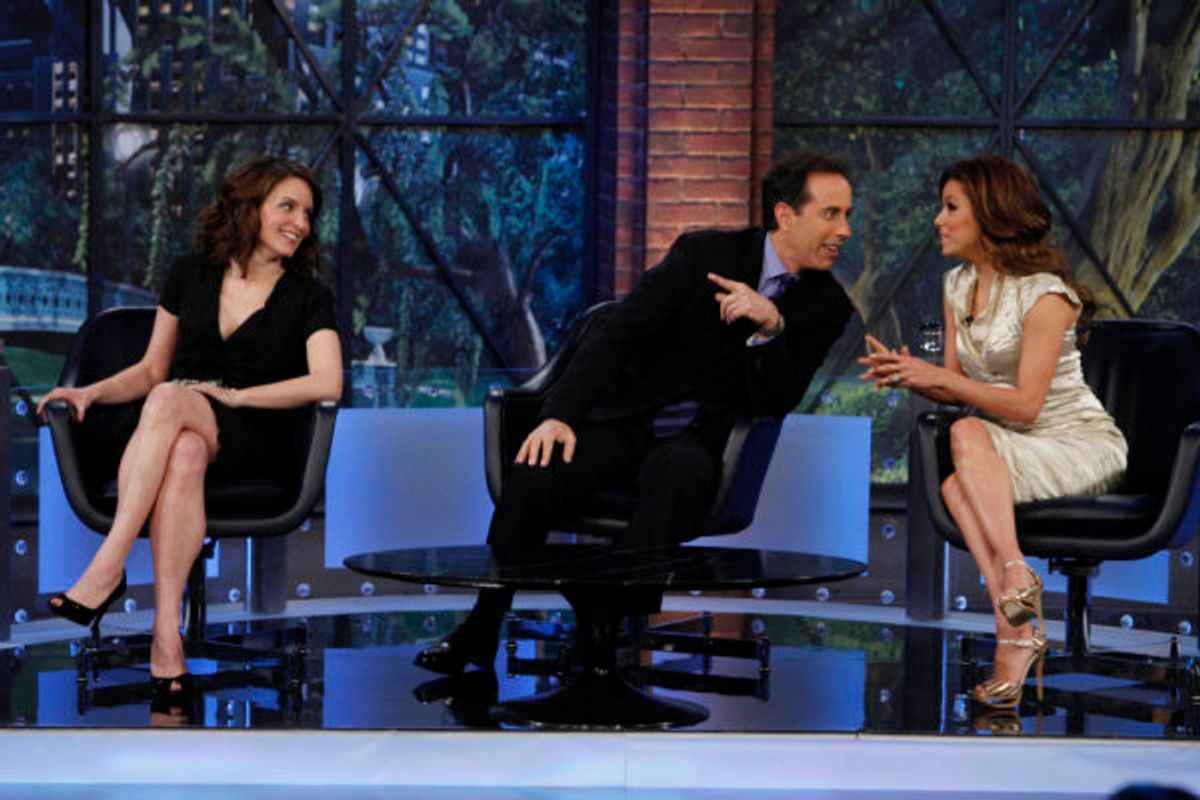 Critics hate "The Marriage Ref" (10 p.m. Thursdays on NBC). They say it's condescending, awful, wretched, unfunny, canned, corny. Some viewers seem to agree: One tweeted during Thursday night's premiere, "Now Jerry Seinfeld has been on both the best and the worst TV shows of all time."

Let's consider the portrayals of marriage on TV available to us up until now: Angry couples about to divorce on "Dr. Phil," cutesy couples guffawing over their adorable children's goofy shenanigans with homemade explosives on sitcoms, and exhausted couples squabbling over who lost the map on "The Amazing Race." In all of these cases, you provide the commentary and the laugh track (especially on Dr. Phil).

On "The Marriage Ref," Alec Baldwin, Tina Fey, Ricky Gervais and Jerry Seinfeld do it for you.

Now let's consider the portrayals of celebrities available to us: We can gaze at photos of them in sweatpants taking their kids to the park, we can listen to their stilted attempts at warmth and spontaneity on the red carpet, or we can endure their longer, even more stilted attempts at warmth and spontaneity on late night talk shows. When celebrities speak instead of just standing around and looking pretty, they tend to speak at great length about whatever movie or show they're promoting, then titter nervously through the balance of the interview.

On "The Marriage Ref," stars finally have something fun and concrete to banter about: the absurd quarrels of married couples. Here's a husband who wants his stuffed dead dog displayed in the house, a wife who would like the dining room only to be used on Thanksgiving (the rest of the year it sits, fully decorated, but untouched), a husband who gets pedicures instead of spending time with his kids, a wife who wants her husband to stop taking off his wedding ring when he plays basketball or goes out with his friends.

"I think if you're going to stuff your dog, you should stuff it in either a useful or attractive position," Alec Baldwin remarks in the show's sneak preview.

"If he did not say 'shnooki' he might get it more," offers Tina Fey of one husband.

Later she adds, "Sometimes if a man is naturally hairy, and they remove too much hair? He looks like a hot dog."

Even Eva Longoria is funny on the show's full-hour premiere on Thursday night, admitting that she, too, keeps her dining room table fully adorned but unused year-round. Later, when Longoria refers to times when her husband, Tony Parker, sees her without makeup or a weave or her "chicken cutlet things" (presumably those adhesive push-up bra devices women wear with strapless dresses), Seinfeld interrupts to say, "You're the human equivalent of the formal dining room!"

Sorry, but I love this show. Yes, Tom Papa's affectations can be a little much sometimes. Yes, they should turn down the microphone when everyone is laughing. Yes, they should lose the dorky bit where Natalie Morales from NBC News sits in front of a computer and looks up information online. (We really don't need to know that 1,000 people nationwide stuff their pets, that pole dancing can burn up 250 calories per hour, or that dust is made up of human skin and dust mite excrement. If Tina Fey's eyes are glazing over? So are ours.)

But the rest? Married people, angry at each other? Celebrities, making fun of each other? Chicken cutlets? I'm in.

And guess who's on the show next week? Larry David, Madonna and Ricky Gervais. That's right, Madonna, our own personal queen of light and sound, the human equivalent of the refurbished, redecorated master bedroom suite with gigantic walk-in closet and Jacuzzi-tub-equibbed full-bath, will sit between attack dogs Larry David and Ricky Gervais, and discuss, of all things, marriage. That, my friend, is the very definition of must-see TV.