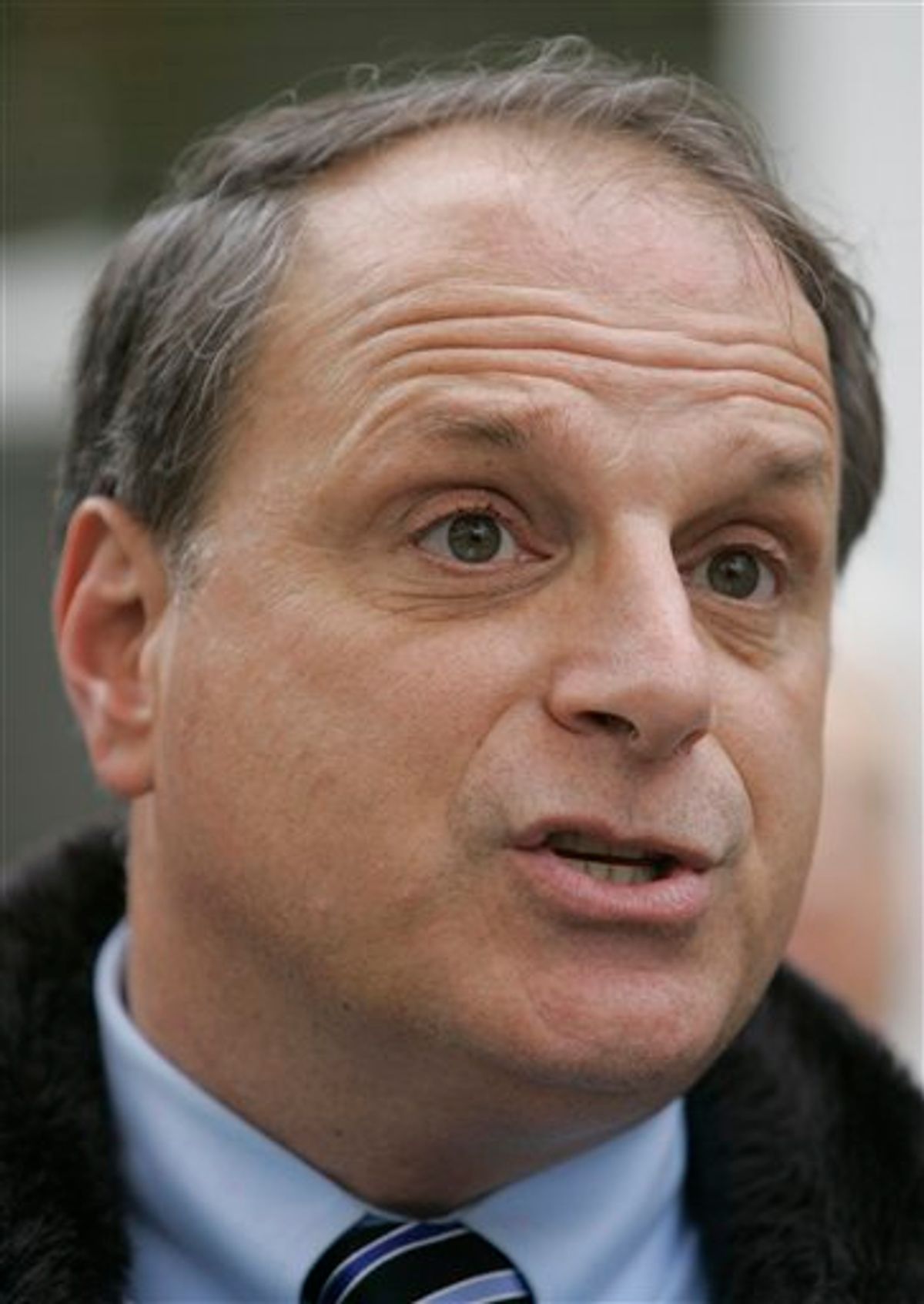 FILE - This Tuesday Oct. 14, 2008 picture shows Eric Massa, Democratic candidate for New York's 29th Congressional District in Rochester, N.Y. On Wednesday, March 3, 2010, Rep. Eric Massa, a freshman Democrat from New York, said that he will not seek a second term after a recurrence of cancer late last year, dismissing blog reports that he had harassed a staffer. He was elected in 2008. (AP Photo/David Duprey) (AP)
--

Rep. Eric Massa, D-N.Y., who announced earlier this week that he would not run for reelection after serving just one term in Congress, will resign effective Monday, Time's Jay Newton-Small reports.

Though Massa maintained that his decision was motivated by concern for his health -- he's had cancer, and he told reporters Wednesday that he had a cancer scare late last year -- he's also been hit by allegations that he sexually harassed a male staffer. That allegation is being investigated by the House ethics committee.

The really big news out of Massa's resignation, though, may be about healthcare reform. His leaving the House means that Speaker Nancy Pelosi only needs to round up 216 votes, not 217, in order to get it passed.

Update: Massa's written an open letter about his resignation that's now up on his Congressional Web site. It gives the harassment allegation as the reason for his decision to step down, though he still says that his health was the reason he decided not to run again.

Two days ago as I sat reading my new annual CAT scan, having been told that the anomalies in the films may or may not be scar tissue, I decided to finally take the advice that my doctors have repeatedly given me, and that is to take care of my family and myself before my profession. After I decided not to run again I was told, for the first time, that a member of my staff believed I had made statements that made him feel “uncomfortable.” I was told that a report had been filed with the Congressional Ethics Committee. At no point prior to this had any member of the Ethics Committee communicated with me directly - if fact I first read it on the internet.

I own this reality. There is no doubt in my mind that I did in fact, use language in the privacy of my own home and in my inner office that, after 24 years in the Navy, might make a Chief Petty Officer feel uncomfortable. In fact, there is no doubt that this Ethics issue is my fault and mine alone. But in the incredibly toxic atmosphere that is Washington D.C., with the destruction of our elected leaders having become a blood sport, especially in talk radio and on the internet, there is also no doubt that an Ethics investigation would tear my family and my staff apart. Some would say that this is what happens when you stand apart from political parties, which I have done. Others will say that this is what happens to a non politician when they go to Washington DC. I want to make something perfectly clear. My difficulties are of my own making. Period. I am also aware that blogs and radio will have a field day with this in today's destructive and unforgiving political environment. In that investigators would be free to ask anything about me going back to my birth, I simply cannot rise to that level of perfection. God knows that I am a deeply flawed and imperfect person.

During long car rides, in the early hours of the evening, late at night and always in private, I know that my own language failed to meet the standards that I set for all around me and myself. I fell short and I believe now, as I have always believed, that it is not enough to simply talk the talk, but rather I must take action to hold myself accountable.

Therefore, effective at 5 PM on Monday the 8th of March I will resign my position as the Federal Representative of New York's 29th Congressional District in the 111th Congress. I do so with a profound sense of failure and a deep apology to all those whom, for the past year, I tried to represent as our Nation struggles with problems far greater than anyone can possibly imagine. I hope that my family, constituents, and fellow Members of Congress can accept this apology as being both genuine and heartfelt and I wish for them and all Americans only the best. I will take all actions possible to ensure that my personal health is secured in that I know that mine is a far more fragile lifeline than most. For the millions of fellow cancer survivors with whom I share this experience, they, more than anyone else, will understand the honesty and openness in this statement.

I ask that members of the press respect the privacy of my family, my staff, and me at this time.