Why probe Charlie Rangel -- but not Mitch McConnell?

Rangel faces charges over fundraising for a center named after him. Didn't the Senate GOP leader do the same thing? 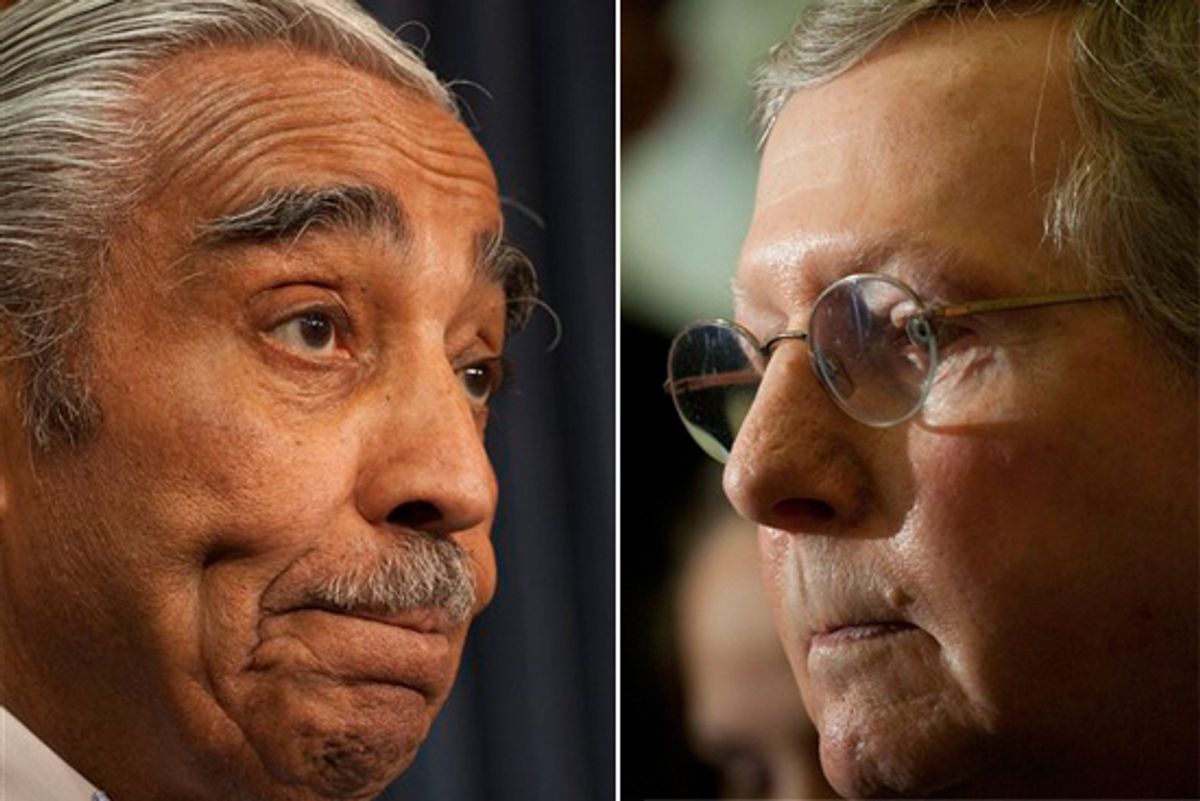 The House Ethics Committee is far from concluding its investigation of Rep. Charles Rangel, despite his resignation from the Ways and Means chairmanship, as the Republicans will no doubt remind everyone repeatedly in the months ahead.

Near the top of the ethics docket, they are sure to mention, are allegations concerning the Harlem congressman's fundraising for the  Charles B. Rangel Center for Public Service at City College of New York, a $30 million project at his alma mater. Rangel has acknowledged using his congressional stationery to solicit funds for the center, a violation of House rules. But he has denied more serious charges -- based on an investigative report in the New York Times -- that he may have exchanged legislative favors for corporate donations to the center.

When ranting on about Rangel, however, what the Republicans surely won't mention is that he's not alone in questionable fundraising for a vanity academic institution that bears his name. Leaders on both sides of Capitol Hill have done likewise for years -- notably including the  odious Trent Lott -- but the most troubling example is none other than Senate Minority Leader Mitch McConnell, who now holds Lott's former post. If the term "Senate Ethics Committee" weren't an oxymoron, he would be enduring an intense investigation, too.

McConnell is a graduate of the University of Louisville, a place of higher learning that he is seeking to transform into a display case for his limitless narcissism (as well as that of his wife, former Bush Labor Secretary Elaine Chao). Lots of nice things at the  university are named after him, but above all there is the McConnell Center for Political Leadership, a special program much like the Rangel Center at CCNY. In such places, young and idealistic scholars are introduced to the tradition of public service represented by these great men, etc.

According to Citizens for Responsibility and Ethics in Washington, which has named both Rangel and McConnell to its annual lists of the "most corrupt" legislators, the list of donors to the McConnell Center was kept hidden by university administrators. When the Louisville Courier-Journal sued to obtain the names of those donors, the Kentucky Supreme Court handed down a curious decision. Future donors to the center would have to be revealed, the court ruled in August 2008, but 62 past donors could remain anonymous.

But thanks to the newspaper's diligent  reporting, names of several of the bigger donors have emerged over the past several years. They include Toyota, which gave $833,000 to the McConnell Center and  considers the Kentucky senator among its main Washington assets during its current crisis; RJ Reynolds and Phillip Morris, which gave $150,000 and $450,000, respectively, and which know they can count on him as a staunch backer of tobacco interests; and Yum Inc., the huge KFC/Pizza Hut/Taco Bell franchiser and a $250,000 donor, whose management was surely pleased when McConnell sponsored a special-interest bill protecting the fast-food industry against lawsuits alleging that their products cause obesity, heart disease and diabetes.

Yet  of all the dubious donors to the McConnell Center, the worst smell emanates from BAE Systems, the British-based defense firm that just settled a years-long, transatlantic bribery investigation last month by paying a record $450 million fine negotiated by prosecutors in London and Washington. BAE subsidiary United Defense Industries gave $500,000 to the McConnell Center because, as a spokesman proudly  explained to the Courier-Journal, "We have a very good relationship with Senator McConnell. We appreciate all he's done for our company and our employees in Louisville."

What has he done for BAE? In the fall of 2007, to cite just one notorious instance, he secured three earmarks worth $25 million for the firm in the defense appropriations bill for programs that the Pentagon had not requested. By then, everyone knew that BAE was crooked and under investigation by the Justice Department, but McConnell continued to perform favors for the company and accept donations from its political action committee.

"Most politicians decide that a scandal is a good time to stop doing business with a company, at least until the scandal is over," remarked CREW executive director Melanie Sloan at the time. "Particularly when we're talking about a criminal investigation over bribery. You would think that a member of Congress would want to steer clear of anyone accused of bribery."

Unless you're Mitch McConnell, that is, who can rely on his fellow senators to do nothing about his corrupt earmarking -- and on the mainstream media, whose deep thinkers will swoon over Rangel's wrongdoing while McConnell's trespasses are simply never mentioned.