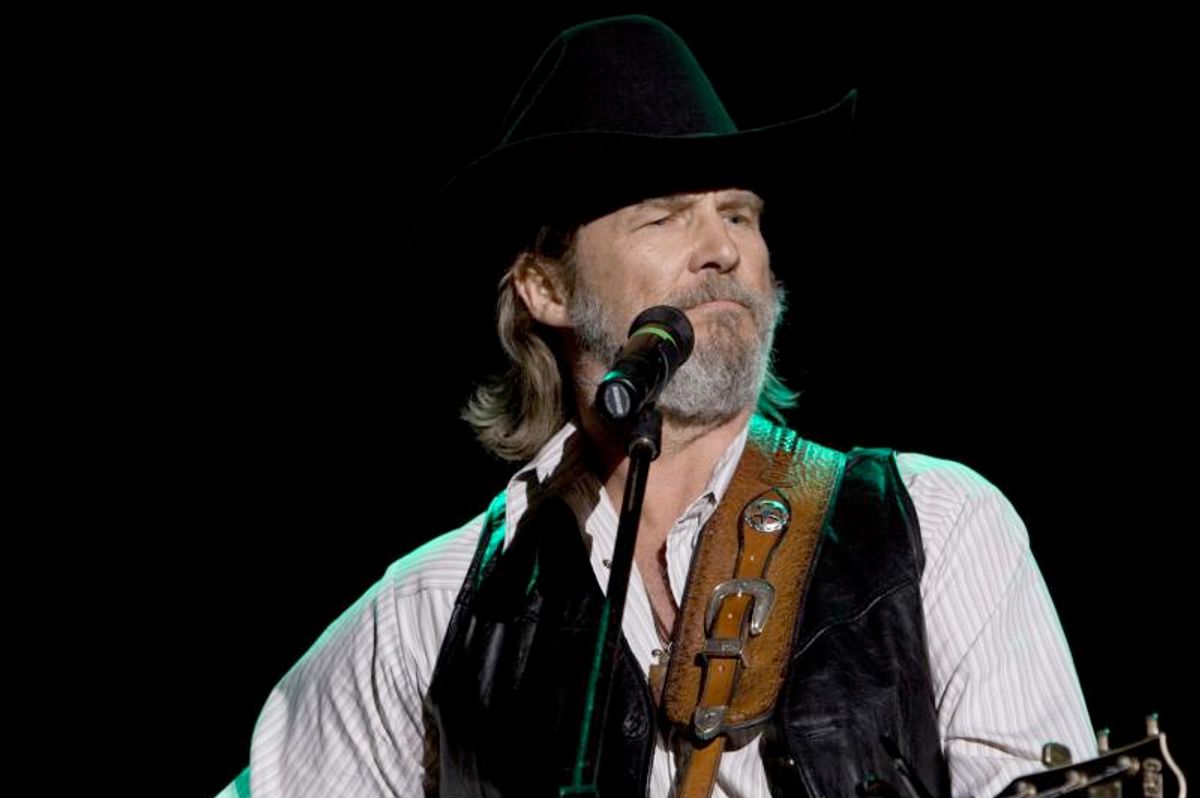 In "Crazy Heart" Jeff Bridges -- who has never won an Oscar, despite the pleasure he's given audiences in a film career that's spanned more than 40 years -- gives a performance that's so comfortably lived-in, it makes you forget there's even such a thing as technique. All performances consist of two basic components: the things an actor does consciously and -- usually the magic ingredient -- the things that emerge as the result of not trying. With Bridges' performance here, as with perhaps nearly every performance he's ever given, it's impossible to locate the seams between the two. Bridges may be acting, but he always makes it look like living.

Is a seemingly casual performance harder to pull off than a mannered or highly stylized one? The answer to that question has as many variations as there are actors, but the fact that Bridges' "Crazy Heart" performance feels so breezy and natural shouldn't cause anyone to underestimate it. This performance doesn't come out of left field for Bridges -- it comes out of the field, which is to say it springs from a lifetime spent giving terrific performances in good movies as well as mediocre ones, as Bridges has done. Bridges has been great in many terrific movies ("The Fabulous Baker Boys," "The Fisher King," "The Big Lebowski"), but it's hard to think of even a bad movie in which he's been bad. His presence has elevated otherwise lousy pictures -- "Starman," for instance -- into works that can't be wholly dismissed. There are few other actors who have been so consistently good and also, strangely, so consistently invisible.

I don't mean that audiences have been blind to Bridges' gifts: In the month since the Oscar nominations have been announced, I haven't run into a single person who openly hopes he doesn't win. (I'm sure that person is out there, but I don't want to meet him.) But Bridges is so understated as an actor that perhaps it's been easy to take him for granted, which is why it's fitting that he should make the biggest splash of his career in a small picture that arrived practically out of nowhere. "Crazy Heart," written and directed by first-timer Scott Cooper (and adapted from a novel by Thomas Cobb), was hustled into a quick pre-Christmas release by its studio, Fox Searchlight. Obviously, some execs there saw the strength of Bridges' performance and thought it might attract Oscar consideration.

Heartfelt appreciation of the actor's craft or crass marketing decision? Who cares? It doesn't matter, as long as he wins. In "Crazy Heart," Bridges plays Bad Blake, a sozzled has-been who meets Jeannie (Maggie Gyllenhaal), a journalist and single mom who coaxes him, without even trying, into straightening his life out. I've heard, as you probably have, "Crazy Heart" described as your typical "washed-up performer saved by the love of a good woman" narrative. But even though the story told in "Crazy Heart" is quite simple, I don't think there's anything typical about it. For one thing, it doesn't stoop to giving us a sappy ending. And Gyllenhaal, as a romantic match for Bridges, isn't a boilerplate character. You can look at this woman and think you've seen her before, but Gyllenhaal -- in the way she here and there shows a flicker of exasperation, or shifts between guardedness and wholehearted openness within the space of a few frames -- plays Jeannie with a searching forthrightness that always feels honest.

She also challenges Bridges, pushes against him, giving him a range of actions and believable emotions to respond to. I marveled the first time I watched Bridges' performance, but I couldn't even begin to parse what he was doing to shape the role. The second time I watched, I had even worse luck -- whatever it is Bridges is doing here, it keeps slipping through my fingers like water. In some scenes, his enunciation is intentionally lousy: Explaining to Jeannie why he quit one of his earlier enthusiasms, playing baseball, he says, "Figured I'd stick with the guitar, sumbitch stayed where it's supposed to." You can understand him perfectly -- this is hardly a drunken slur -- and yet the line has a slippery-graceful texture, like a garden snake darting behind a stone wall. With just a line, Bridges clues us in to what makes Bad an artist and not just a drunken lout who's had a few lucky breaks. He's the hard-living manifestation of Warren Beatty's mumbly frontiersman line from "McCabe and Mrs. Miller": "I got poetry in me!"

This is also a performance with no vanity. Time and again Bridges' Bad will plunk himself down on a couch, or sprawl on a hotel bed, his threadbare shirt left open to reveal a somewhat soft-looking, whitish belly. That belly isn't sexy, and it's not unsexy: It's just there, an unself-conscious declaration -- "This is where I'm at now." This is acting, of course -- by now we've all seen how sweet and well-groomed Bridges looks when he shows up for an awards event -- but here he's so fully slipped into the character's skin that it's indistinguishable from his own.

And Bad's rubbery smile -- a smile that sometimes comes out of nowhere, like a naughty secret -- is killer. That smile is what makes one of the movie's darker moments -- when Bad, after a night of drinking, pukes into the toilet and then curls up on his bathroom floor, whimpering in self-loathing -- so anguishing. To see Bad that miserable is pain itself; he's got to get that smile back, or we'll be the ones to suffer. That's the secret, maybe, of "Crazy Heart": On its most base level, it probably is your stock redemption story. But this is Jeff Bridges we're talking about, an actor who makes every gesture, every offhanded expression, so effortlessly believable that to watch him in anguish is almost unbearable. Late in "Crazy Heart," Bridges -- who does his own singing throughout the movie, in a voice with the hearty, mellow quality of barbecue smoke -- performs a song with the line "This ain't no place for the weary kind." It's a song about not stopping, even when you think you're through, a staple idea in the country-music canon. Bridges' work in "Crazy Heart" is just one astonishing performance among the many he's already given. But maybe it's the one that best pulls together all of the things so many of us love about him -- the way the poetry in him seems so plainspoken, even though it has no words.