Week 7: In a "riveting" challenge, designers forsake the fabric shop for the hardware store 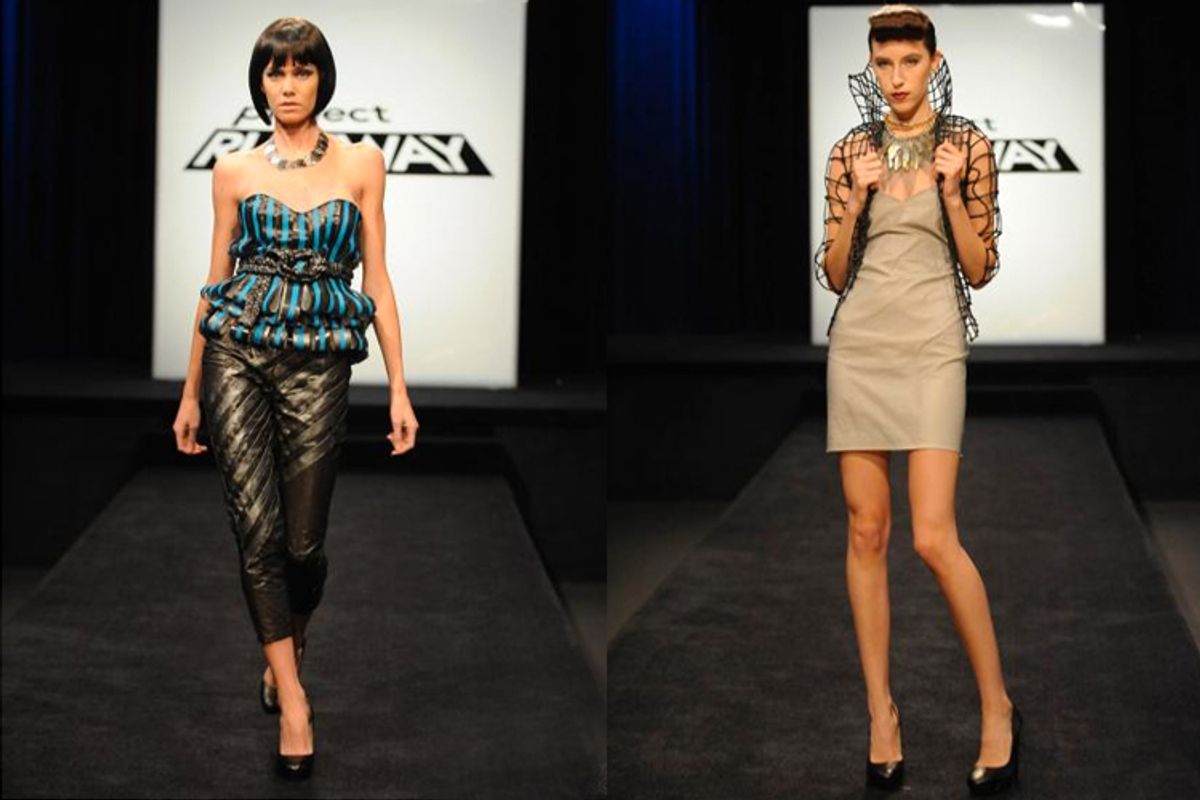 After last week's "Project Runway" hiatus, I sat down on my couch hoping that I could still remember everyone's name. Ping is gone, right? Oh, yes. Janeane went home last week, and Seth Aaron was the winner with that cool black and white jacket.

We are back at the Atlas Apartments. Everyone is very self-congratulatory that they've made it to the top ten. Jay gets particularly sassy and announces, "Top three, here I come, bitches." It sounds very uncomfortable coming from him, since he is usually so mild-mannered.

Tim marches everyone down to Michael Kors' store in Soho. No time is wasted announcing the challenge. The designers will be eschewing Mood Fabrics and instead will make their garments entirely out of materials they find in a hardware store. They also need to make an accessory to complement the apparel. This is going to be a riveting episode, I can tell. (I know. Tool puns are not good. I won't use any more, tempting though it is.)

Michael Kors pulls out every bad corporate-ism in the book, telling them to push the envelope, think outside the box, and be unconventional. I find this all a bit ironic, coming from a designer best known for classic, American basics.

Amy and Maya are both excited. Maya says cryptically that she has experience working with strange objects. Emilio looks worried, saying that he's not crafty. He decides to get nothing but cords and washers, only to find he is way over budget and needs to return about half. He starts mumbling about macrame and Paco Rabanne. I'm now worried, too.

There is s lot of hammering in the workroom this week.  Seth Aaron and Jess are both pounding on metal bustiers. Ben is attacked by a feral piece of copper flashing. Maya is working on her focal point, a large key necklace. Mila is being Mila. She's color blocking a mod-inspired dress. Anthony is trying to make a metal screen light and airy.

Poor Emilio, who is usually so poised and mature, is taking a fair amount of ridicule. His hot pink cord and washer macrame project is not going well. The word "stripper" is thrown about fairly liberally, and someone snarks, "It's definitely creative."

Jay gets the "Lifetime Moment of the Week" when his eyes well up with tears while talking about how he and his younger sister always had to fight for everything, and that he was fighting for his goals now.  Jay is getting quite a bit of screen time this week, actually.

In walks Tim, who this week utters his famous catchphrase no less than four times. The phrase "make it work" doesn't seem to have a corporate sponsor attached. Perhaps Lifetime has amended his contract to state that he must use it a minimum amount of times per episode? Anyway, he announces that the workroom looks like the Arms and Armor wing at the Metropolitan Museum of Art.

Mila and Maya are told that their designs have the potential to be exciting and spectacular. Jesse is making an Elizabethan mini, and that gets Tim's signature one-eyebrow-up look of disapproval. Emilio is told that his dress is so short that "you may end up with a bikini."  Anthony's dress looks "tortured."  Tim is skeptical of Jay's desire to use garbage bags to make pants, but he ultimately pronounces them spectacular.

Emilio finally has to concede that, indeed, he doesn't have enough materials to make a dress, so he is going to do a bathing suit. It is supposed to be a bikini, but the bottoms are so heavy that they won't stay up, so he has to tie the top to the bottom, effectively converting it to a one-piece. Anthony quite tactfully says,"The one thing that never goes out of style is making a woman look like a lady." Lady Gaga, maybe. He is clearly worried for Emilio, too.

On runway day, the designers are all uneasy about the show. None of them are confident in their designs this week. Someone says, "My bloody fingers are crossed."

There are two guest judges this week, in addition to Michael Kors and Nina Garcia. Isabel Toledo is an independent designer probably best known for designing the chartreuse  outfit worn by Michelle Obama on Inauguration Day. Stephen Webster is a British jewelry designer who produces big, chunky designs using large, semi-precious stones and unusual shapes, such as lobsters and shark jaws.

The top three this week are Mila, Jay, and Maya. Amy was robbed. Her design was lovely and original, and while Mila's was well-executed, there was no design originality. But the judges don't seem to tire of her well-worn mod aesthetic. The judges all love Maya's outfit and called her necklace the strongest accessory out of all the contestants. The judges are impressed that Jay's faux leather oufit looks like a luxury product even though it was made out of the least luxurious material.

During judging, Stephen Webster is entertaining and offers productive comments, and Isabel Toledo doesn't say much of anything. The fact that I can't recall specifics of what either one said is either a shortcoming on my part, or they just weren't that dynamic.

The bottom three are Emilio, Jesse, and Anthony. Surprisingly, the judges are not as harsh with Emilio's design as I expected them to be. Nina actually says, "I don't think it's that bad" and actually admires that he went for a full-on Barbie effect, complete with big hair. Michael pronounces it a full-on cheese fest.  The word "pornographic" is used. I am very bothered that Emilio keeps saying, "All the other designers were safe and went with a dress, but I wanted to do something different." The reality is he misjudged his material  and had to do a smaller garment. Tim, the augur, had joked that Emilio was going to end up with a swimsuit.

Anthony's is condemned for being too pretty and too boring. Stephen Webster said if you saw it on the sales rack you would skip right over it. They thought he missed the point of the challenge and didn't embrace the materials. Jesse took the worst criticism with his tin man/Hershey Kiss/dirty vacuum bag (Heidi's description, not mine) dress.

Jay wins this week, and I suspect he is going to be in the top three this season. His designs have been strong, original, and well-executed. Jesse is sent home, and I'm certain Emilio heaved a big sigh of relief. It's clear the judges see potential in his other works and partially judged him on that.

Though gimmicky, I like to see the challenges where the designers are required to be inventive with unusual materials. It always surprises me that they can come up with anything at all, nevermind a wearable garment that actually looks stylish. But that is why they're on "Project Runway" and I'm not.