Could a Kennedy take out Scott Brown in 2012?

He won Ted Kennedy's seat in a January stunner. And that was easy compared to his next task: Getting reelected 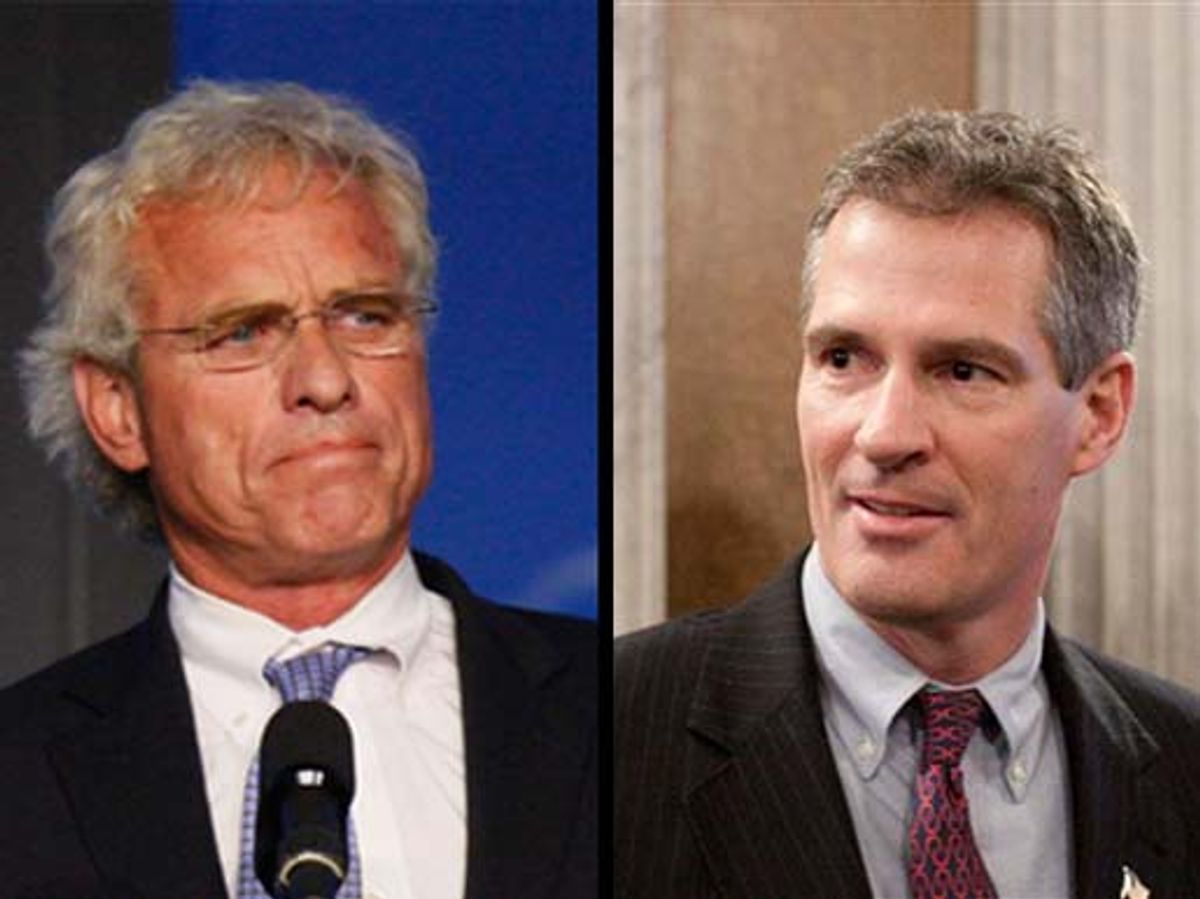 When he broke with his party -- and the tea party movement that had claimed him as one of its own -- to kill a recent GOP filibuster of a jobs bill, Scott Brown delivered an emphatic political statement: He's serious about trying to win a full Senate term in two years.

It won't be easy. The last Republican senator to win reelection in Massachusetts was Ed Brooke in 1972 -- back when ideology and party label weren't synced up as they now are. Brooke may have had an "R" next to his name, but he was also a liberal, something that counted for a lot in the only state to vote for George McGovern. And next to Brooke, Brown might as well be Jim DeMint, even with his jobs bill vote and pro-choice position.

To understand Brown's 2012 challenge, it's helpful to recall exactly how he won January's special election. There were three main factors: 1) The buyer's remorse nature of midterm elections, which was amplified by soaring unemployment and complete Democratic control of Washington; 2) a politically deficient Democratic nominee who melted down when voters and the media suddenly began paying attention to the race two weeks before the election; and 3) Brown's own personal marketability, which helped him connect with blue-collar voters in small and midsize cities.

The playing field in 2012, though, will obviously be quite different.

Start with the Obama factor. Sure, it's possible the president's standing will be as mediocre (or even worse) than it is now. But history strongly suggests this won't be the case. Ronald Reagan and Bill Clinton bottomed out in Year 2 of their administrations only to bounce back and win resounding reelections, and the stage is set for Obama to engineer a similar feat. The key, obviously, will be unemployment.

Here, Reagan offers a helpful guide: The unemployment rate was actually higher -- 7.8 percent -- on Election Day 1984 than it had been when he took office in January 1981 (7.5 percent). And yet, he still won 49 states. Why? Because that 7.8 percent represented a significant improvement from the worst of the early '80s recession. And because people genuinely liked Reagan. They were happy to give him credit for declining unemployment -- and to believe that the trend would continue in his second term. If Obama can bring unemployment under, say, 8 percent by Election Day '12, he should reap a similar windfall at the polls.

This, obviously, would severely complicate Brown's reelection hopes. After all, a big chunk of his winning coalition came from voters who had supported Obama in '08 only to grow disillusioned -- the same folks who will come flocking back to the president if he can demonstrate improvement in the economy. So the "Send Obama a message!" line of attack probably won't play for Brown in '12.

Then there's the nature of the Democratic opposition. Martha Coakley's shortcomings as a candidate have been meticulously documented. One of the reasons she won the Democratic nomination with ease this year (a 20-point win in the primary over her closest foe) was the universal belief of Democrats that they couldn't lose in the general election. So Coakley, with her mile-wide/inch-deep popularity as attorney general, began the primary campaign as the overwhelming front-runner and the party's voters paid little attention to the campaign. She was good enough, they figured, so why get all worked up about it?

In 2012, though, Democrats will take the task of choosing a candidate very seriously. Party leaders in the state and in Washington (and even primary voters themselves) will think very carefully about who will have the best chance of breaking up Brown's coalition and reclaiming the seat. In fact, they're already starting to think about it.

The name that's most often linked to the race -- not at all surprisingly -- is that of Joseph P. Kennedy II, the former congressman who nearly jumped into this year's special election.

Kennedy opted out of that race for several reasons, those who know him and his family say. For one, he's perfectly happy running Citizens Energy. After all, this wasn't the first time he passed up running for statewide office since leaving Congress in 1998. There also may have been some tension with Vicki Kennedy, his Uncle Ted's widow. Both Joe and Vicki, some say, had interest in the seat, but neither wanted to step on the other's toes. And then there was the Coakley factor. It's hard to imagine now, but when the race began last fall, Coakley was actually running even with or ahead of Joe Kennedy in polling. He would have had to fight her for the nomination, something he wasn't eager to do.

But if he wants the nomination in '12, it's widely agreed, he could have it without serious opposition. Democrats who previously thought they were invincible in Massachusetts Senate races are now ready to rally around Kennedy as their savior -- their surest bet to unseat the Republican usurper. Maybe a clear primary field will entice him to run in 2012.

Plus, with Patrick Kennedy's retirement -- and the recent decision of Joe's son, Joe III, not to run for Congress in Massachusetts this year -- there will be no Kennedy in federal office for the first time in decades come next January. Perhaps Joe will feel the tug of family duty to win back his uncle's seat in 2012 -- and to restore the Kennedys to their rightful place in the Washington world.

Or maybe he really is content in retirement from politics. The consensus now is that party leaders will plead with him to run and that he'll flirt with the idea. But whether he actually pulls the trigger? Well, that's another matter.

His decision will be a major factor in Brown's chances. If Kennedy were to pass, Democrats would probably stage a crowded and possibly divisive primary. It's assumed that Rep. Michael Capuano, who finished a distant second to Coakley in December's primary, would run again. Rep. Stephen Lynch, the pro-life South Boston Democrat, would probably be interested, too. And former Rep. Marty Meehan, now the chancellor at UMass-Lowell (and the possessor of a $5 million war chest), would be in the mix, too. So would many other names. But none of them would represent the clear, instant threat to Brown that Kennedy would.

Still, that won't necessarily doom him. It is possible for a Republican incumbent to win a blue state even when a popular Democrat is at the top of the ticket. Susan Collins just did it in Maine in '08.

Finally, there's Brown himself. He can't control Obama's popularity and he can't control which Democrats run and which don't, but he does have some control over his own image and political standing. In voting for the jobs bill, he showed that he understands the need to distance himself from the national GOP brand, which remains toxic in Massachusetts -- and will probably be in worse shape by 2012.

As an incumbent, Brown will have some obvious advantages, too. For one, he can raise money and earn free media coverage over the next two years. More important, he will be the default choice of many voters; they'll begin the campaign inclined to vote for him and will have to be persuaded to fire him. Here, the personality that won him favor with so many Democratic-leaning voters in the special election will help immeasurably.

It's impossible for a Republican to win reelection in a deeply blue state -- even in a presidential year. Susan Collins just accomplished this in Maine in 2008. And it's possible Scott Brown can do it too in 2012. But he's going to need some luck.