The best politician is a nervous one

Bunning, Dodd give the lie to the Beltway elite view that Washington is too responsive to public opinion 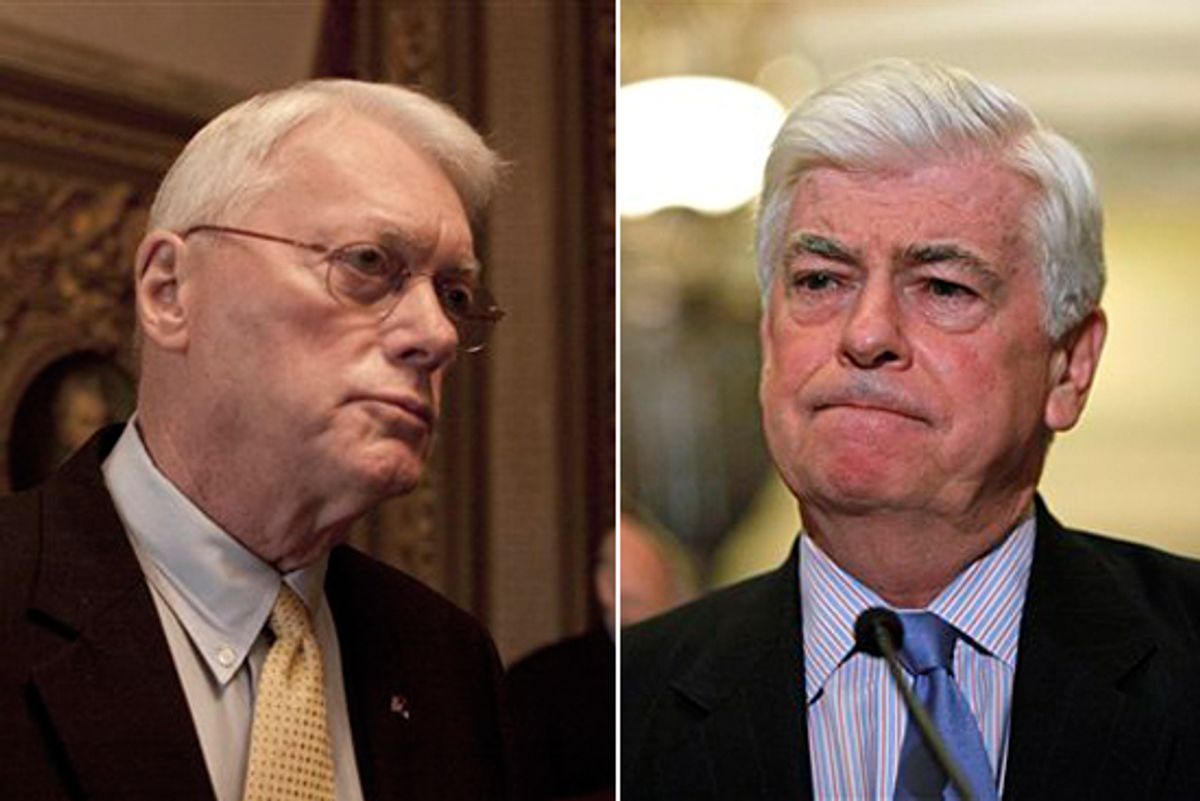 When you look past the craziness, chaos and confusion of politics these days, you still find roughly two major schools of thought that aim to explain What's Fundamentally Wrong.

The first says America is paralyzed by a political system that is too democratic -- too responsive to citizens' whims. This is the religion of almost everyone in the permanent Washington elite, regardless of party. Its canon mixing paeans to noblesse oblige with shrill authoritarianism is most clearly articulated by high priests like the Washington Post's David Broder and the New York Times' Tom Friedman. The former has said democracy threatens to make "official Washington altogether too responsive to public opinion"; the latter dreams of Chinese-style dictatorship.

"One-party autocracy certainly has its drawbacks. But when it is led by a reasonably enlightened group of people, as China is today, it can also have great advantages," Friedman recently gushed, adding that the chief "advantage" is the ability of despots to "just impose" policies at the barrel of a gun.

By contrast, most people living outside of Washington (i.e., the Rest of Us) see America harmed by a political system that is too undemocratic -- too controlled by moneyed interests, unaccountable lawmakers and a servile press. An organizer friend of mine sums up this view by saying, "The best kind of politician is a nervous politician" -- and the trouble is that gerrymandering, extended terms, incumbent fundraising advantages, obsequious media coverage, lame duck-ness and other travesties make sure few politicians are ever nervous about keeping their jobs.

Over the course of history, neither side of this divide has had a full monopoly on truth. But recent moves by three senators teach that, at least at this moment, the Rest of Us are more accurately diagnosing the root problem than our Beltway adversaries.

What, for instance, is Sen. Jim Bunning but the personification of unaccountability's downsides? The Kentucky Republican announced in July that he is not seeking reelection. Thus shielded from democratic pressure, he felt free to let his conservative extremism fly with an outrageous attempt this week to block unemployment benefits for thousands of jobless Americans.

Connecticut Sen. Chris Dodd is Bunning's Democratic analogue. When he was planning to face voters in 2010, he was motivated to represent their support for stronger financial regulations. For instance, he promised to use his Banking Committee chairmanship to pass a bill constructing a Consumer Financial Protection Agency (CFPA) -- one independent of the Federal Reserve, which he rightly said "failed for over 14 years to put an end to the predatory mortgage lending practices that led to the financial crisis."

Now, however, Dodd has opted not to run for reelection -- and guess what? He's started working with lobbyists to make sure any CFPA is run by the Fed.

The converse of Dodd and Bunning is Michael Bennet, who embodies the same axiom -- but in the opposite way. Confronting an increasingly aggressive Democratic primary challenge from former state legislator Andrew Romanoff, the Colorado senator is suddenly shaking off his backbench lethargy. Last week, he released a letter endorsing the use of majority rules ("reconciliation") to create a much-needed government-run health insurer that will compete with private insurance monopolies. Polls in Colorado and nationally show his initiative is wildly popular -- and since he needs voters' support to retain his Senate seat, he is reinvigorating this critical fight.

Bennet is nervous; Bunning and Dodd are not. The one facing democracy is serving the public interest; the two insulated from democracy are serving their own interests. In government today, the election-related trepidation and legislative responsiveness is the exception, the insulation and indifference the norm.

If you want to understand What's Fundamentally Wrong, here endeth the lesson.