From full-frontal nudity to splashing blood, is this the future of TV or just a pornographic video game gone mad? 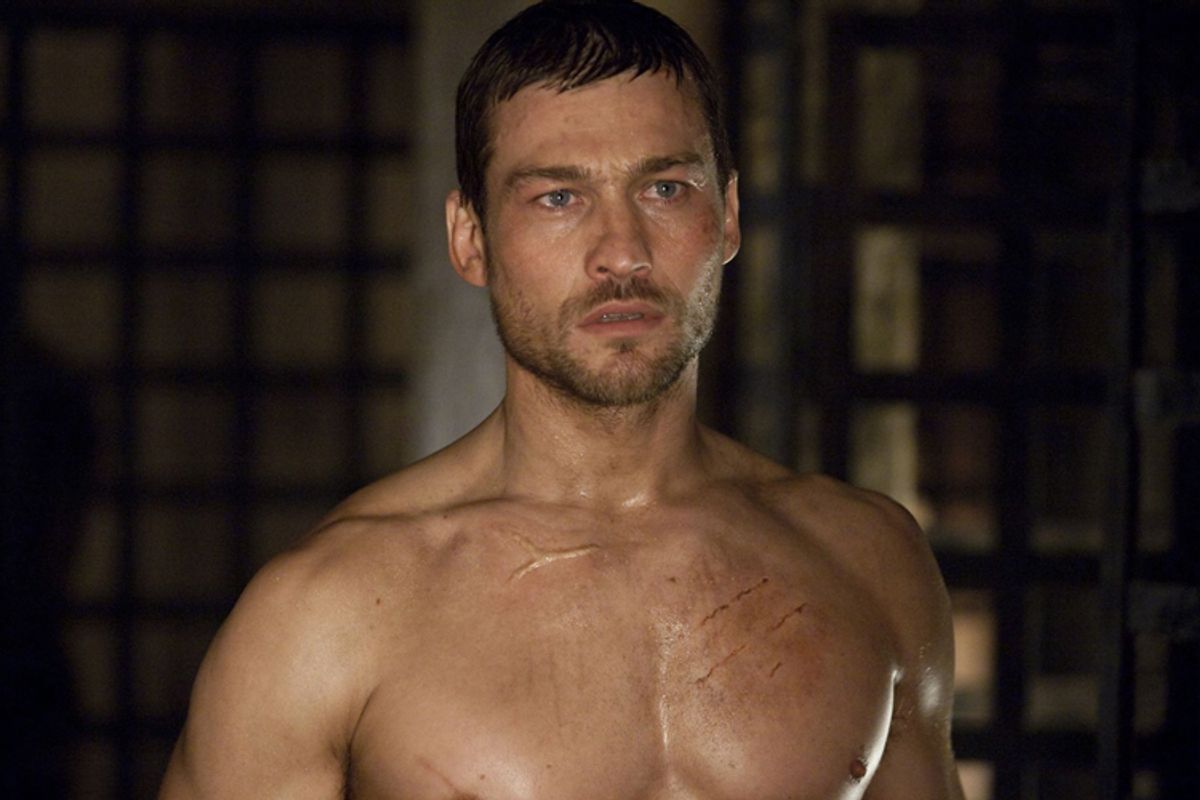 What's wrong with modern life? When did our spontaneity and imagination and appetite for glory leave us, replaced by bloodshot eyes and a hard knot in the stomach, failure wrapped in neuroticism dripped with anxiety covered with dissatisfaction? When did we trade in our vibrant, lusty, devil-may-care recklessness and red wine-glazed dreams for the carpal tunnel and coffee breath of the professionally compromised? When did we go from carefree iconoclasts to distracted, sallow lumps who've wasted the better half of a decade rewriting inter-office e-mails so that they're less of a reflection of our bitter, dying souls?

Sure, when we're not impaired by the relentless drumbeat of empty tweets and Googled tragedies and breathless press releases about the latest jackhole to sign up for "Dancing With the Stars," we do try to reach out to each other, tenuously, through Facebook and Twitter and sometimes even by picking up our telephones, which haven't held a solid charge since Monica Lewinsky was running around the White House in capri pants.

But it's not the same. One decade into the new millennium, one too many irresistible up-to-date blurbs and blogs and snippets and tweets have smeared our once-lively spirits across the dirty windshield of life.

Except when we're in a really good mood, and then everything's fine.

Butt cheek of the gods

It seems that ever since that time, humans have steadily grown more vague and sullen, losing more muscle mass and joie de vivre each century that they walked the earth. With each passing decade came another reason to slouch and feel discouraged: the spinning wheel (ouch), barbed wire (drag), pasteurization (enough already), the electric nose-hair clipper (please). All of it led up to where we are today, namely, watching "House" while sobbing into a laminated cup of cherry Jell-o.

But fear not, because our new hero Spartacus is here to lead us out of the darkness, demonstrating exactly how we might get our souls back: namely, by having lots of frisky humpy time with meat-Chiclet-adorned macho men, then throwing big sharp knives at offensive strangers from across the room!

Of course, it all starts with the raping and pillaging of our home villages after being betrayed by the Romans. Next, our lovers are carried away and enslaved by Roman fiends and we're made to fight four men at once in the Colosseum (much like the Superdome but with more people sporting the then-fashionable boobs-out look). That ends in lots of blood splashing, and a rowdy mass of boobs-out heathens yelling out our (new, fake) name, which forces powerful men to harness our 15 minutes of fame for evil, rather than good. Next come the muscle men who lecture us menacingly in the shower while their gigantic penises bob along with every step, and then we do some defiant stuff that almost gets us killed, but finally we give in and agree to lug around huge logs and spar with other greased-up ding-dongs, so that, eventually? We're all puffy and fierce and ready to beat people's faces in until blood splashes across the camera. Mmm, it feels good to be alive, doesn't it? Who knew that our deliverance would come in the form of hand-to-hand combat, impromptu orgies and around-the-clock sipping out of fancy chalices of red wine? All right, I had some inkling.

Even if it doesn't free humanity from our current lackluster path, "Spartacus: Blood and Sand" exists on an entirely different planet from other televised entertainments. This is HBO's "Rome" on steroids, Viagra, LSD and crack: The sex scenes feature bare asses, bare breasts, slaves on hand to help masturbate their masters into the proper state of excitement, and haunted lutes playing in the background. The fight scenes are half "300," half "Mortal Kombat," replete with rotating severed heads, slow-motion flying buckets of blood that occasionally expand to fill the entire screen with a sea of red, and warriors who bellow, "We'll fuck your women. We'll fuck them all!"

Hell, even the straightforward conversations between two characters typically feature some gratuitous twist: Spartacus' archenemy stands, berating him while fully naked, his big cock practically piping up with its own sidekick tag lines ("Yeah, like my boss just told ya! You're dead meat, mister!"); Lucretia (Lucy Lawless) lounges in a see-through top, having a long conversation with her husband that we can't understand because we're being glamoured by her huge breasts; some character whispers "cunt" or "fuck whore" or any number of salacious things (like this nastiness, from Lucretia: "It all comes back round to a pair of tits and a tight little hole"). Sure, it worked on "Deadwood," but without the Shakespearean adornments, "fuck" often feels like an extra bucket of fake blood that you didn't really need to get your point across.

But then, the point or story is just window dressing to the slugging and screwing that we came to see here. When extremely fit human beings growl their paint-by-numbers Hollywood historical epic lines ("Nothing will keep me from returning to your arms, not the Romans, not the gods themselves!"), making sweet lyrical Abdominizer love, then slash their opponents knees in half with their glittering hatchets, we're offered a glimpse into an animal world we traded in for the sterilized, vacuum-sealed alienation of modern life.

No wonder this basic formula -- seethe, slash, screw, repeat -- dressed up as it is by CGI effects and blue-eyed star Andy Whitfield, isn't shocking more audiences with its over-the-top flashiness and pandering. Sure, some have called it "too rude for British TV," but who are we sleazy, foul-mouthed Americans to judge? The blogs certainly lit up last week when the gay gladiator, Barca (Antonio Te Maioho), made athletic love to his partner Pietros (Eka Darville), who grinned from ear to ear as if to say, "This is really my favorite perk of being a slave boy."

But those two are actually fond of each other, and are engaged in the equivalent of a standard under-the-sheets, missionary position compulsory routine, compared to the frenzied humping unfolding elsewhere: Batiatus (John Hannah) takes his ample-bosomed slave woman from behind, Lucretia (Lawless) rides her gladiator Crixius (Manu Bennett) into the sunset, and all of it is merely foreplay for the decapitations and gory mess that comes after it. Somehow the special effects, the sandals, the swords, and the mystical lutes distract us from the fact that this sex-followed-by-blood-bath may be the closest TV has come to snuff.

Naturally, ratings are through the roof for Starz -- 1 million at last count. So what does this tell us about the state of cable television in 2010? Maybe that if you throw out the rules and boundaries of middlebrow network television and create something depraved and lascivious and gruesome, with plenty of slashed throats and greased-up abs and CGI flourishes, you will emerge triumphant.

Or, as Doctore (Peter Mensah) puts it, "Forget everything you learned outside these walls, for that is the world of men. We are more, we are gladiators!"