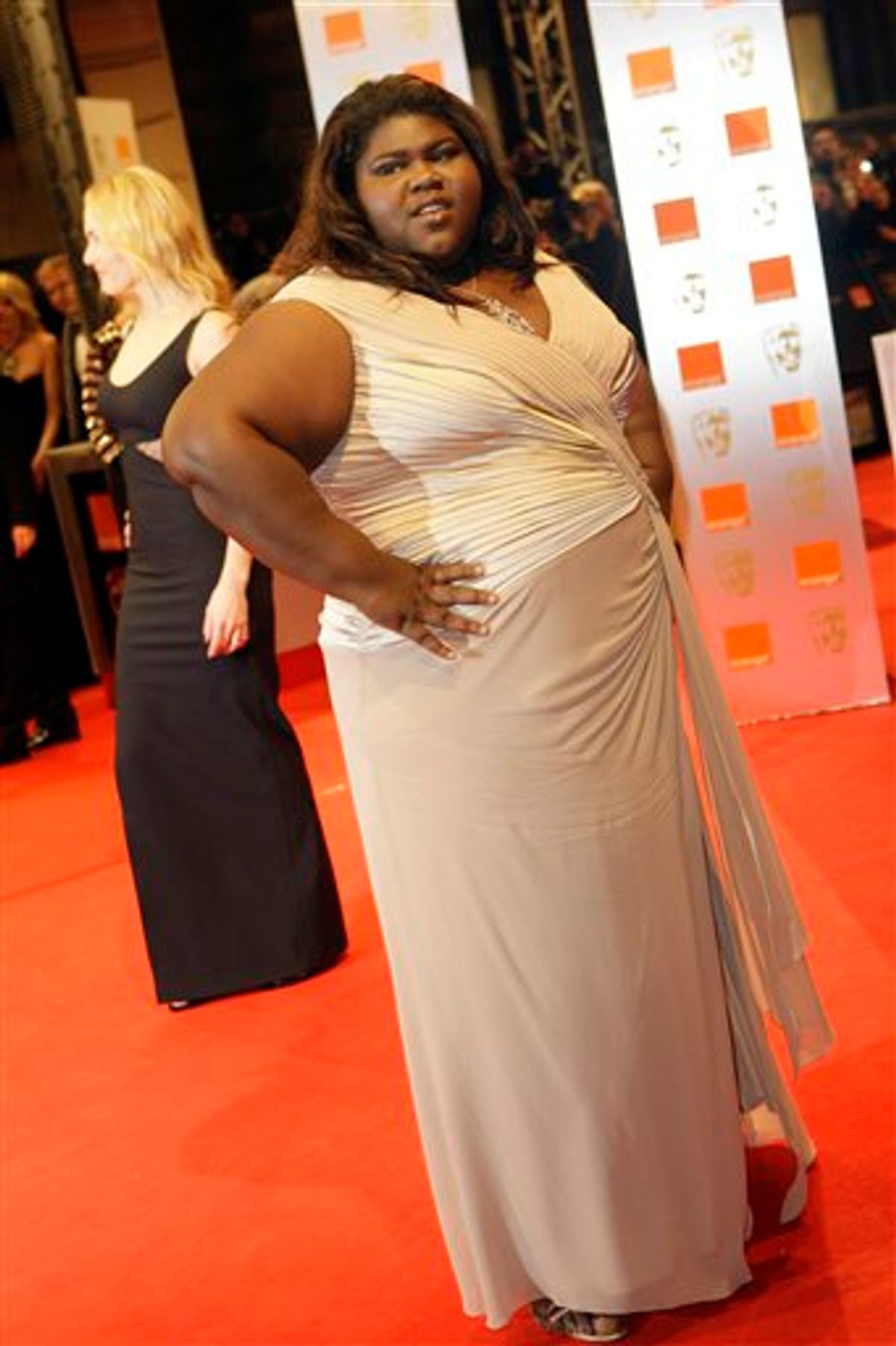 So last week I read this widely reblogged USA Today article in which Gabourey Sidibe's stylist, Linda Medvene (who?), proclaimed that "everyone" wanted to dress Gabby for the Oscars and then went on to name some lesser known designers like Kevan Hall.

Now if you had read this on USA Today's site and not on another blog that was linking to it, you would have noted, as I did, that they felt the need to put "full-sized" in quotes -- "Designers vie to dress 'full-sized' Gabourey Sidibe" --  like it's such a derogatory thing to say about a woman that they needed to soften the blow with ... well, kinda.

She IS full-sized, mofos. She's not ashamed of it. Stop trying to be ashamed for her! DAMN.

But this Linda Medvene stylist person did also proclaim that they had decided to go with Marchesa, a house known for the fab dresses they do for all the A-list actresses.

Marchesa's head designer, Georgina Chapman, is married to Hollywood honcho, Harvey Weinstein, who I have a love/hate relationship with because his outfit dropped the film renewal option on my first novel, BLING, which they also published thru Miramax Books, at the 13th hour on some real shady shit after the Hollywood writer's strike and basically force majeured my ass out of the equivalent of a year's salary. So, yes, I have beef with the Weinstein camp. I'm admitting that right up front.

And I was side-eyeing the whole thing from the get-go because Georgina is a size negative 0 (or here's a good one ... notice the plate? empty) and the largest actress she's ever dressed is a six. That would be her bestie J. Lo who she didn't do right by when she got hugely pregnant with her twins. So when I heard about her dressing Gabs I was thinking, I'd like to be a fly on the wall at THAT fitting. But at the same time I was trying to be optimistic about the outcome. Well, as we all know, our first instinct is almost always the right one.

Now, one day before the Oscars, it's come out in a Fox News article "Gabourey Sidibe's Dress Mystery: When Plus Size Is Too Big for Hollywood," that Gabby has been showing up at all these events in off-the-rack clothing. And BALLET FLATS. Damn, are her FEET too fat to squeeze into a motherfucking Choo?! What are these people doing to this poor child's self-esteem?!

And now Medvene can't won't name the designers who have sent her sketches but she can say who Gabby won't be wearing on Oscar night: Marchesa.

Bitch, we got it from you!!!!! Has she ever heard of Google? Is she trying to say USA Today fabricated her direct quote from a week earlier? Which was ...

I think we all knew she was exaggerating about being DELUGED by top COUTURIERS, but this Marchesa business smells to high heaven! These fucking people. Just get more fabric, bitches!

And if André Leon Talley, who I love, EVER wanted to do something good in his life he would have swept this child up into the bosom of his kimono and sat in the wings at her last-minute fitting with Whoever He Commanded To Do This!

This is some reeeeal funny style bullshit going on here and my only consolation is to believe that Gabby is so above and beyond this surface CRAP that hopefully it will not affect her or let it ruin her night. But this still makes me wanna CRY! I know SHE doesn't give a fuck about a Dior but she HAS to do the red carpet and then to have to say 100x, "It's... Lane Bryant"?! UGH, it's so hard to be a girl!

And this whole thing is rubbing salt in the as-yet-unhealed wound of Chris Rock presenting her the award at the NAACP Awards last week and calling out her name as "Gaaa...PRECIOUS!" They are not one in the same MOTHERFUCKER!!!! Someone said he probably didn't know how to pronounce her last name. Well, does Pookie know how to fucking pronounce Gabby?! #hositdown to him too!

Now if on top of this, Sandra Bullock wins for Blind Side, aka The Magical Negro Bullshit That Made $250mil and Made Me Turn On My Once Beloved Sandy Like A Rabid Dog, beating MERYL in her tour de force (yet again) as Julia Child, I swear I swear I swear ... I cannot be held accountable for what I TWEET!

OMG, I just did an image search to find another pic of Gabby...read this --> Gabourey Sidibe slaps Chris Rock after awards show grope

How fucking BOMB is she? I tell you, I would murder for this girl. Don't test me. #TeamGabby4Life