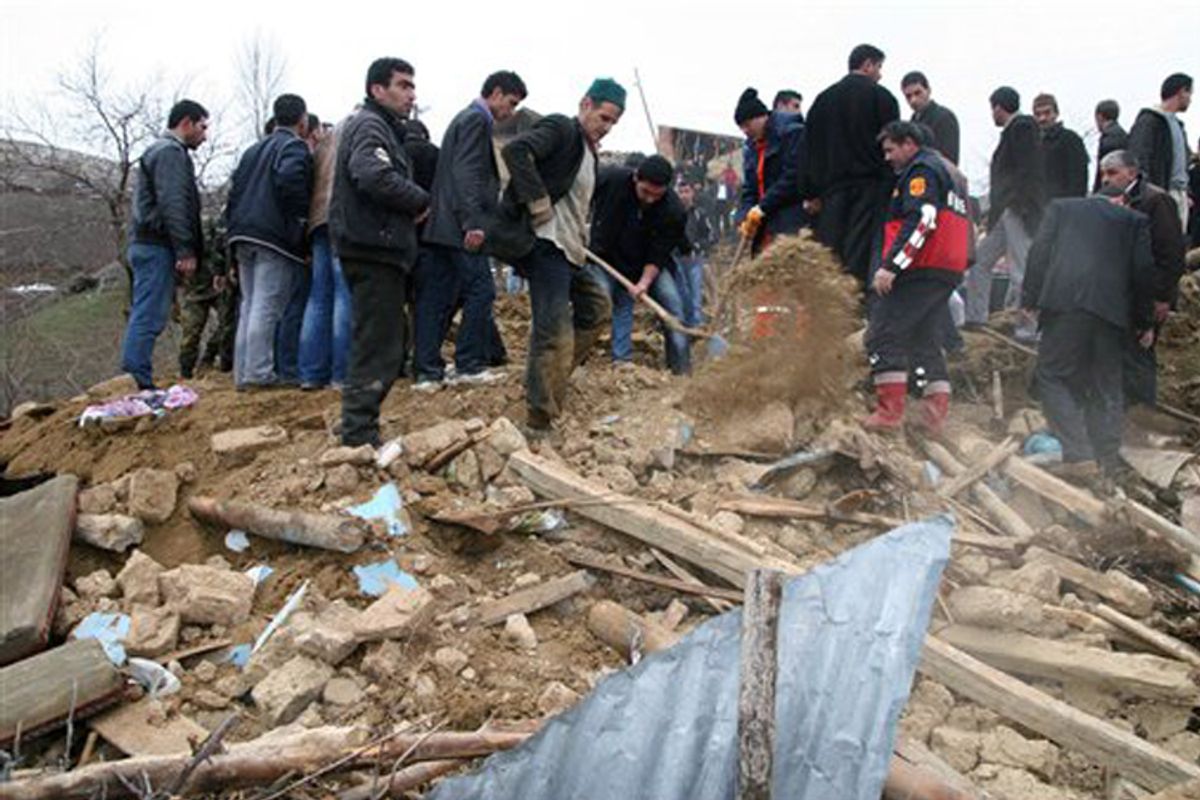 Rescue workers remove rubble from a destroyed house in eastern Turkey after an earthquake on Monday.
--

A strong, pre-dawn earthquake with a preliminary magnitude of 6 struck eastern Turkey on Monday, killing 51 people as it knocked down stone and mud-brick houses and minarets in at least six villages, the government said.

The earthquake surprised many people as they slept, crumpling buildings into piles of rubble. Panicked survivors fled into the narrow village streets, some climbing out of windows, as more than 50 aftershocks measuring up to 5.5 and 5.3 magnitude rattled the region.

The government initially put the death toll at 57 but later lowered it to 51. It gave no explanation for the discrepancy. In addition to the deaths, about 34 people were being treated for injuries from the quake, Turkey's crisis center said.

The worst-hit area was the village of Okcular, where 17 people were killed. As relatives rushed in for news of their loved ones, authorities blocked off the area so ambulances and rescue teams could maneuver on the village's narrow roads. Residents lit fires to keep warm in the winter cold.

Ali Riza Ferhat of Okcular said he was woken up by the jolt.

"I tried to get out of the door but it wouldn't open. I came out of the window and started helping my neighbors," he told NTV television. "We removed six bodies."

Television footage showed rescue workers and soldiers at Okcular lifting debris as villagers looked on. Rescuers dug into the dirt to find the body of an elderly man and quickly covered him with a sheet. Two women sat on mattresses wrapped in blankets. The temblor also knocked down barns, killing farm animals.

Another 13 people were killed in the village of Yukari Demirci, Gov. Muammer Erol said, adding that by noon everyone had been removed from the rubble.

"Everything has been knocked down, there is not a stone in place," said Yadin Apaydin, administrator for the village of Yukari Kanatli, where he said at least three people died.

Prime Minister Recep Tayyip Erdogan and Kandilli Observatory's director, Mustafa Erdik, urged residents not to enter any damaged homes, warning they could topple from aftershocks that Erdik said could last for days.

Erdogan blamed the region's mud-brick buildings for the many deaths and said the government has instructed its housing agency to construct quake-proof homes in the area. He said ambulance helicopters, prefabricated homes and mobile kitchens were being sent, and Turkey's Red Crescent aid group rushed in tents and blankets.

The quake was also felt in the neighboring provinces of Tunceli, Bingol and Diyarbakir, where residents fled to the streets in panic and stayed outdoors. Schools were closed for two days in the region. In Tunceli province, students were sent home after the quake caused a school's walls to crack, the state-run Anatolia news agency reported.

A museum in Elazig displaying artifacts from the Iron-age Kingdom of Urartu was not affected by the quake.

Earthquakes are frequent in Turkey, much of which lies on top of two main fault lines. In 1999, two powerful earthquakes struck northwestern Turkey, killing about 18,000 people.

The Elazig quake followed deadly temblors in Haiti and Chile, but Bernard Doft, the seismologist for the Royal Netherlands Meteorological Institute in Utrecht, said there was no direct connection between the three.

"These events are too far apart to be of direct influence to each other," he said.

Richard Luckett, a seismologist from the British Geological Survey, said there has not been a spike in global seismic activity.

"If there was a big increase in the number of magnitude 6.0s in the past decade we would know it because we would see it in the statistics," Luckett said. "We haven't seen an increase in 7.0s either."

He said scientists often see strong quakes but they don't get reported because the damage or death toll is minimal.

"The point is that earthquakes are common and always have been," he said.

Associated Press Writers Suzan Fraser in Ankara, Turkey, and Arthur Max in Amsterdam, the Netherlands, contributed to the report.