In a media blitz, the Treasury secretary tries to sell a message a public eager for revenge doesn't want to hear 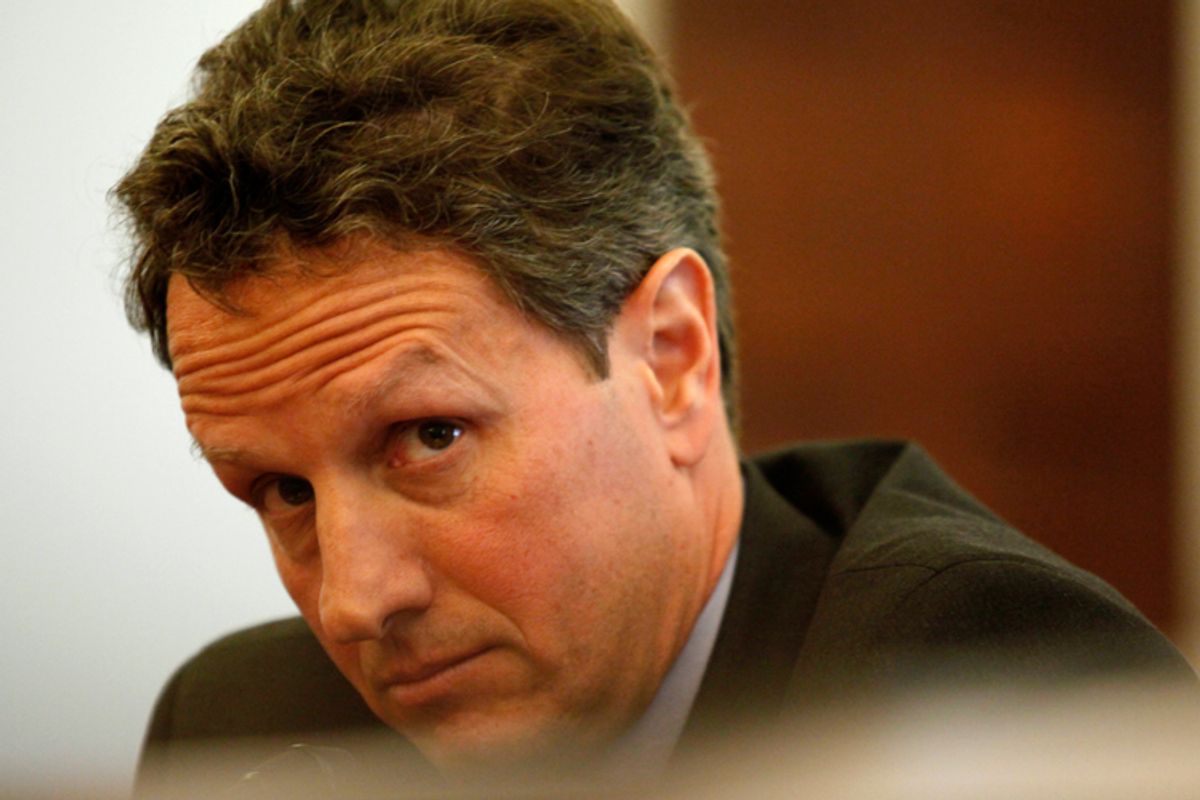 What do we learn that we didn't already know about Timothy Geithner, after reading 15000 freshly pixellated words about him this morning? Not a whole hell of a lot, really, except that the economy must be doing a lot better than it was a year ago, because the Treasury Secretary sure seems to have plenty of time to spare these days for press interviews.

Which is, of course, the point. An underlying theme to both Joshua Green's epic profile in The Atlantic and John Cassidy's more restrained treatment in The New Yorker is that, due in no small part to the efforts of Geithner, the economy is in much better shape than it was a year ago. Financial markets have stabilized, Wall Street's biggest financial institutions do not appear to be on the verge of bankruptcy, and the sense of widespread panic has more or less dissipated.

And yet, neither Obama nor Geithner get much credit for this feat, from either the left or the right. The reasons are obvious: Unemployment is holding steady at near ten percent, the future prospects for economic growth are, at best, uncertain, the general public's understandable desire for vengeance against the titans of Wall Street has not been satisfied at all, and efforts at financial regulatory reform seem half-hearted and unlikely to achieve much, even if pushed through. As both profiles stress, the Obama administration, with Geithner as its economic policy point man, may have prevented further economic collapse, but did so in such a way as to "lose the public." The political costs have been immense.

But we knew that already. Geithner's multi-magazine profile explosion is clearly calculated to reverse that impression, to rebuild his reputation. It's going to be an uphill climb. The storyline has been set. No amount of spin or media management at this point is likely to change how he is viewed, no matter how articulately the Treasury secretary jousts with smart financial reporters.

And articulate he is. Both Green and Cassidy get great quotes from Geithner, who has been a model of preternatural control and calm, publicly, through his entire tenure as Treasury secretary. Here is Geithner telling Green why seeking to stabilize the financial situation was more important than getting revenge, or scoring political points.

Geithner plainly has no patience for what he describes as the obdurate unwillingness of colleagues to subordinate their desire for superficial impact to the larger vision. "That's exactly the dilemma," he said. "The stuff that seemed appealing in terms of sharp discontinuity, Old Testament justice, clean break, fix the thing, penalize the venal, would have been dramatically damaging to the basic strategy of putting out the panic, getting growth back, making people feel more confident in the future -- solving it without putting trillions of dollars of the taxpayers' money at risk unnecessarily."

Or try the closing quote to Cassidy's piece:

"Why do policymakers screw up financial crises?" he said before I left his office. "They screw up financial crises because the politics are horrible, and that deters action. They are slow and late and tentative and weak because they are scared to death of the politics. But sometimes a policymaker has to say, I'll take pain now against pain later."

In both cases, Geithner is making the case that he did what was best for the larger economy without regard to the political (or personal) cost. That he made the hard choice, not the easy one.

Geithner faces an unresolvable dilemma. He's an elitist in a populist era. We heard exactly the same kind of we know what's best rhetoric on the topics of deregulation and financial sector innovation -- often delivered by men who were Geithner's mentors. There's less patience right now, on both the left and the right, for government rationalizations than I can ever remember seeing. I'm no particular fan of Old Testament justice, but my guess is that having been denied satisfaction from the current administration, the people will wreak some of their own justice at the polls in November. And the heat on Geithner will only notch up.

How The World Works Timothy Geithner