"The Genius in All of Us" 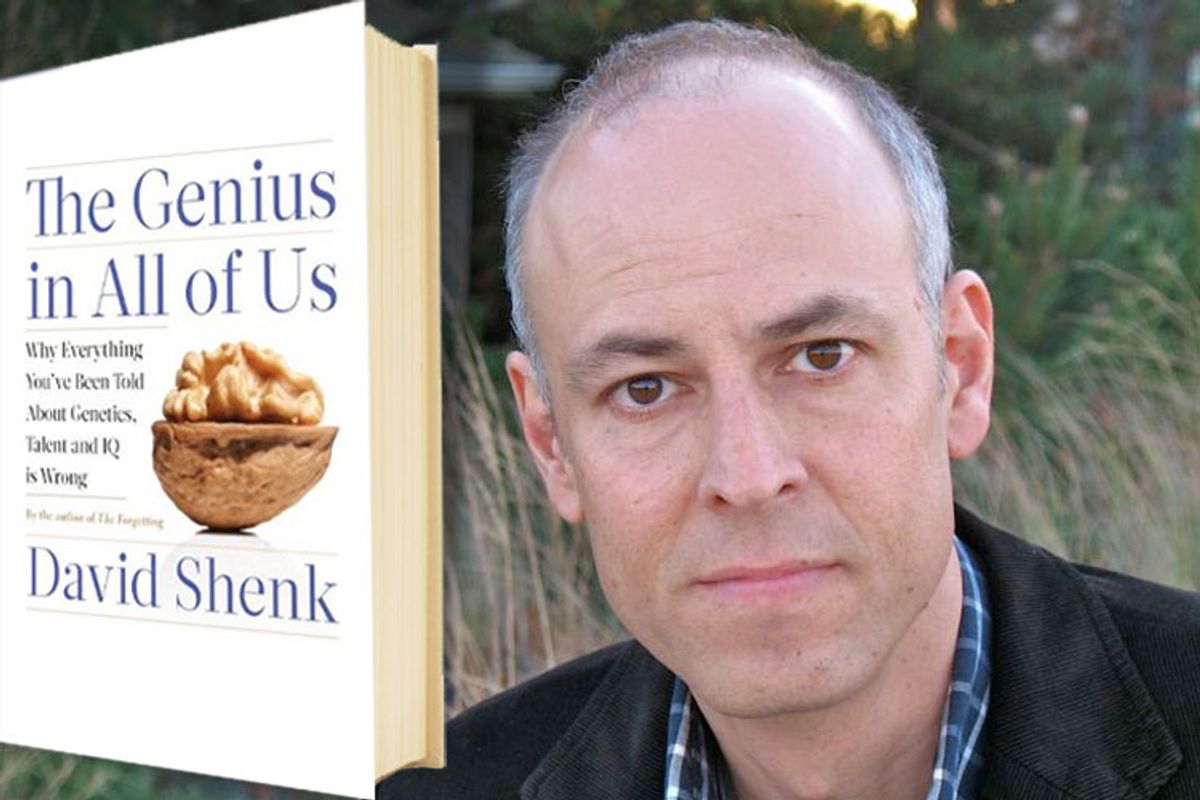 David Shenk's new book, "The Genius in All of Us: Why Everything You've Been Told About Genetics, Talent, and IQ Is Wrong," is 300 pages long, and more than half of those pages are endnotes. You need to offer up a lot of evidence when your goal is to overturn a concept as commonplace as the idea that genes are the "blueprints" for both our physical bodies and our personalities. Above all, what Shenk wants to communicate is that "the whole concept of genetic giftedness turns out to be wildly off the mark -- tragically kept afloat for decades by a cascade of misunderstandings and misleading metaphors." Instead of acquiescing to the belief that talent is a quality we're either born with or not, he wants us to understand that anyone can aspire to superlative achievement. Hard, persistent and focused work is responsible for greatness, rather than innate ability.

Shenk does have a lot of evidence for this assertion, most of it coming from geneticists and other biological researchers who are perplexed at the way their disciplines get depicted in the media. "Today's popular understanding of genes, heredity and evolution is not just crude, it's profoundly misleading," Shenk writes. While most scientists long ago rejected the idea that nature and nurture are two separate factors competing in a zero-sum game to dominate human behavior, laypeople still cling to the idea that whatever aspect of ourselves isn't caused by our environment must be caused by our genes, and vice versa. In recent decades, heredity has gotten most of the credit; the host of the brainiest NPR talk show in my area inevitably prompts every expert to confirm that whatever they're discussing -- mathematical ability, wanderlust, ambition, mental illness -- is genetically determined.

According to Shenk, and he is persuasive, none of this stuff is genetically determined, if by "determined" you mean exclusively or largely dictated by genes. Instead, "one large group of scientists," a "vanguard" that Shenk has labeled "the interactionists," insists that the old genes-plus-environment model (G+E) must be jettisoned and replaced by a model they call GxE, emphasizing "the dynamic interaction between genes and the environment." They don't discount heredity, as the old blank-slate hypothesis of human nature once did. Instead, they assert that "genes powerfully influence the formation of all traits, from eye color to intelligence, but rarely dictate precisely what those traits will be."

Shenk's particular interest is talent, genius and other instances of extraordinary ability, whether the skills be athletic, artistic or scientific. Musicians and athletes most often get held up as examples of the triumph of innate gifts. According to Shenk, we are erroneously led to believe that stars like Tiger Woods and cellist Yo-yo Ma were born to climb to the top of their fields, when in fact the environments they grew up in are just as responsible (if not more so) for their spectacular feats. To prove this point, he methodically debunks several widely cited examples that supposedly prove the reality of inherited gifts: child prodigies, twin studies and geographical pockets of excellence at particular sports. In all of these cases, he demonstrates, observers have ignored and downplayed the enormous role of environment (especially in early childhood) in favor of touting the preeminence of genetics.

"The Genius in All of Us" strives for clarity -- a difficult standard when you're trying to describe such things as the role of environmental factors in controlling the expression of genes that are in turn susceptible to far more influence from environment than most of us realize in the first place. Or when you're explaining that "heritability" -- a "dreadfully irresponsible" word coined by researchers studying identical twins raised apart from each other -- refers to statistical probabilities in large populations, not to the qualities of particular individuals. A lot of the misunderstandings that Shenk laments seem to arise from the fact that genetics often involves statistical reasoning, while most nonspecialists have a pretty weak grasp of how probability, averages and means work.

With this in mind, Shenk states his assertions as plainly as he can in the main text of "The Genius in All of Us," then expands on the topic in his notes for those readers who want more information. It's an inspired method, a lot like the print manifestation of a digital article with hyperlinks to other documents illustrating the key points. For the majority of readers who are really only interested in the book's core argument, it's easy enough to extract the gist in a mere three or four hours of reading, but skeptics and advocates are free to lift the hood and see how it all works. While "The Genius in All of Us" isn't an inventive, sensitive piece of writing like Shenk's celebrated book on Alzheimer's disease, "The Forgetting," it isn't meant to be; he has deliberately stripped it down to communicate a handful of insurrectionary ideas as simply and unequivocally as possible.

To boil these ideas down even further, Shenk asserts that intelligence is not fixed but rather highly malleable depending on the demands placed upon it and the resources made available. Much of our capacity to think, perform and create is primed in early childhood, so the importance of creating a stimulating, challenging and supportive (but not coddling) context for young children can't be overstated. And while some of us are born with a slight edge when it comes to aptitude, most people can come pretty close to the highest levels of achievement in our chosen field if we pursue it in the right way. Of course, the intensity of drive and commitment exhibited by top athletes like Ted Williams or scientists like Einstein (who said "It's not that I'm so smart, it's just that I stay with problems longer") is, in itself, extraordinary. But Shenk believes that this, too, can be inculcated, if we so desire.

As someone who has always resisted genetic determinism while still subscribing to the secular mystery religion of talent, I confess that "The Genius in All of Us" has quietly blown my mind. But the book's premise has far more profound implications for social policy. What would education, the workplace and government look like if we behaved as if we truly believed that nobody is born to mediocrity? "Human talent and intelligence are not permanently in short supply like fossil fuel," Shenk writes, "but potentially plentiful like wind power." It's an apt comparison in more ways than one; there are huge vested interests relying on the old attitudes. The determination to turn that around will need to be mighty enough to put even the great Ted Williams to shame.

Books Our Picks What To Read