A funny, dynamic broadcast ends with Kathryn Bigelow snatching two Oscars out of the hands of her omnipotent ex 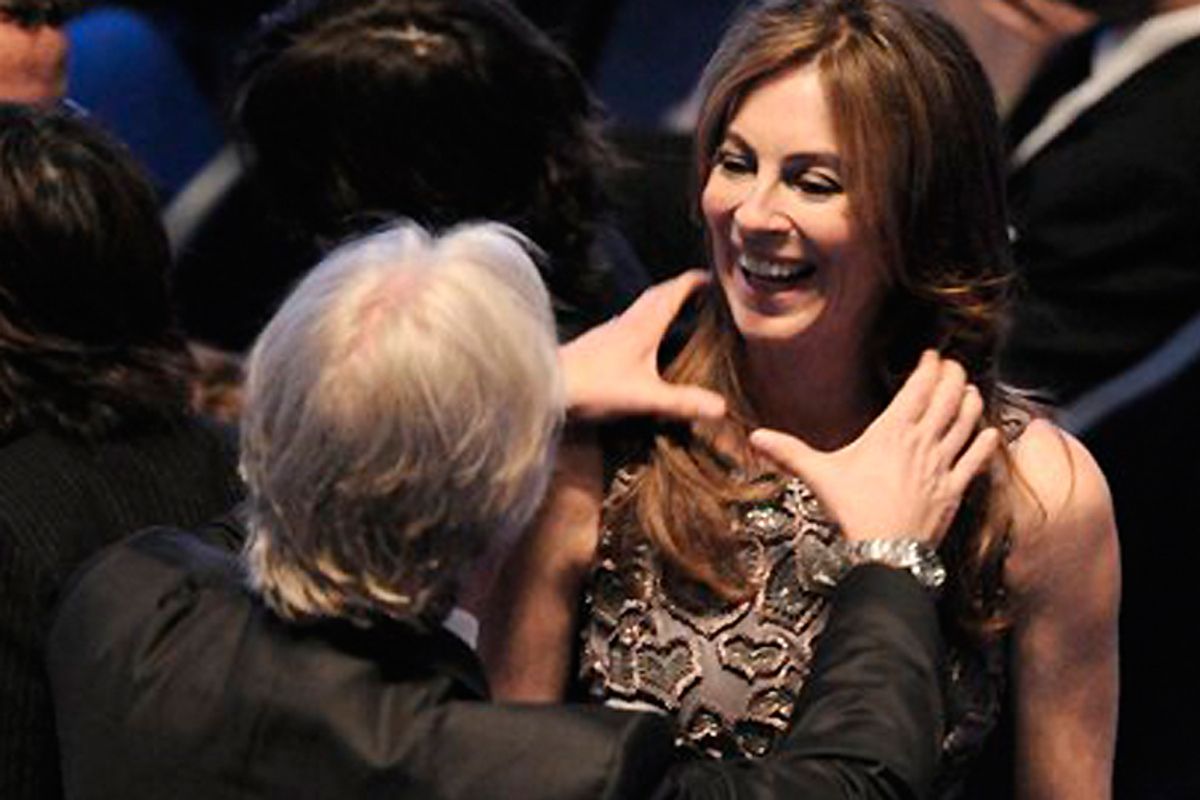 James Cameron and Kathryn Bigelow before the Academy Awards on Sunday.
--

How did they do it? As crazy as it sounds, this year's Oscar festivities were dynamic, funny and moved along at a good clip. Hosts Steve Martin and Alec Baldwin were hilarious, there were great jokes by everyone from Tina Fey to Ben Stiller, and the speeches were less long and dull than they've been in years. For once, no one rambled on forever and agents were rarely thanked. Not only that, but the usual endless tributes that serve no purpose whatsoever were gone, cut down to a great John Hughes segment and an entertaining horror-movie montage. Best of all, the best original songs were not performed, which means we weren't forced to sit through two more blandly upbeat tunes with those old familiar Randy Newman melodies you've heard on every Oscar night for decades now. And I think we can all agree that an Oscar night without a Disney ballad performed or a long, rambling Lifetime Achievement acceptance speech is a winner in anyone's book.

Here are a few of the highs and lows of the night:

Best new twists on old features: 1) James Taylor's sweet, wavering voice singing live during the "In Memoriam" portion added a touching and personal dimension to this segment; 2) Remember when the dancing on the Oscars was limited to lackluster, paint-by-numbers choreography by hammy, foolishly costumed Broadway wannabes? The Legion of Extraordinary Dancers blew that tradition out of the water in bringing the best original score nominees to life. The dances for "The Hurt Locker" and "Avatar," in particular, were evocative and breathtaking.

Worst new twists on old features: 1) Neil Patrick Harris is very talented, but after last year's hilariously funny Hugh Jackman showstopper, this song and dance was only OK. 2) Bringing the best actor and actress nominees onstage in the first moments of the awards? Awkward and pointless. 3) The John Hughes montage was wonderful, but the tribute wandered astray with the big group of actors standing and honoring him with one or two sentences. "He gave us the gift of laughter," one of them says, thereby giving us the gift of queasiness and John Hughes the gift of turning in his grave.

Best joke of the night: Alec Baldwin explains, "In 'Precious,' Gabourey Sidibe is told she's worthless, nobody likes her, that she has no future. Hey, I'm with CAA too!"

Off-color joke of the night: Robin Williams: "Later this evening, the governor's ball will be held, just one of many balls being held all over Hollywood tonight."

Worst dressed: Miley Cyrus appears wearing what looks like one of those 24-hour girdles Jane Seymour used to hawk on TV.

Best exchange of the night: Between Robert Downey Jr. and Tina Fey, in a prelude to the best original screenplay.

Downey: What does an actor look for in a script? Specificity. Emotional honesty. Catharsis.

Fey: And what does a writer look for in an actor? Memorizing. Not paraphrasing. Fear of ad-libbing.

Downey: Actors want scripts with social relevance, warm weather locations, phone call scenes that can be shot separately from that insane actress that I hate, and long dense columns of uninterrupted monologue, turning the page, and for instance seeing the phrase, "Tony Stark, continued."

Fey: And we writers dream of a future where actors are mostly computer-generated and their performances can be adjusted by us, on a laptop, alone.

Strangest moment: Elinor Burkett interrupts Roger Ross Williams while he's accepting the best doc short award. "Let the woman talk," she says. At first it looks like she's some random crazy person who jumped up onto the stage. It doesn't help that Roger Ross Williams doesn't really move over and let her stand in front of the microphone. Salon's Kerry Lauerman spoke to both Williams and Burkett post-Oscars, and the whole crazy clash is explained here.

Best impromptu joke: When screenwriter Geoffrey Fletcher wins best adapted screenplay for "Precious," he gives a heartfelt but stunned speech and ends it all with, "Sorry, I'm drawing a blank here. Thank you, everyone." Martin appears and brags to the audience, "I wrote that speech for him."

Worst incidence of playing with fire: Several people give James Cameron credit for their Oscar and one calls him a genius. Is it really in our best interest to make James Cameron feel more powerful than he already does?

Least gracious remarks of the night: 1) Mo'Nique, "I would like to thank the Academy for showing that it can be about the performance and not the politics." She's referring to the criticism surrounding her refusal to campaign for an Oscar, but it ends up sounding like a slapdown of her fellow nominees -- that if, say, Maggie Gyllenhal won the Oscar, it wouldn't have been about the performance.

2) Best costume design winner Sandy Powell (of "The Young Victoria") starts off her speech with, "Well, I already have two of these, so I'm feeling greedy. I'd like to dedicate this one to ..." It's not a handbag, woman. Guess this is just another ho-hum Oscar-winning day in her sparkly-hat life.

3) Joe Letteri accepting best visual effects for "Avatar": "Just remember the world that we live in is just as amazing as the one we created for you." Thanks for that little reminder. Also, remember that the real Lord and Savior and Creator of the Heavens and the Earth is just as all-powerful as James Cameron.

Most accurate mistake of the night: Keanu Reeves, who has become a parody of himself, comes out and speaks in his signature monotone. "Isn't he paralyzed?" asks my 12-year-old stepson. "Pretty much," I answer. "Oh, I was thinking of Christopher Reeves," he says.

Best introductions: Both by Steve Martin. 1) On Sandra Bullock: "You loved her in 'The Blind Side,' adored her in 'The Proposal,' and thought she was just OK in 'Miss Congeniality II.'" 2) On "Precious": "The one film that really lived up to the video game."

Best gags: 1) Ben Stiller with a blue face and scary yellow eyes, speaking Na'vi. 2) Cutting to Martin and Baldwin backstage wearing Snuggies. 3) Martin and Baldwin's parody of "Paranormal Activity," in which they sleep fitfully all night in the same bed.

Best recovery: Just when the tributes to the best actor nominees is getting a little bit over-the-top with talk of the "enormous talent" of "the magnificent Colin Firth" and so on, Tim Robbins saves the day in his tribute to costar Morgan Freeman: "I'll never forget what you said to me about friendship on the last day of shooting. You said, 'Being a friend is getting the other a cup of coffee. Can you do that for me, Ted? It is Ted, isn't it?'"

Best reaction shot: When Stanley Tucci says of Meryl Streep, "The two movies we did together were the highlight of my career," Streep giggles at the audacity of this, which she clearly believes is an exaggeration.

Strangest trend of the night: Jokes about being gay. Steve Martin and Alec Baldwin have numerous "we're a couple" gags, Colin Farrell brags about spooning with Jeremy Renner, and Sandra Bullock refers to "my lover Meryl Streep." It's official: Pretending you're gay is the new pretending you're not gay.

Most abrupt transition: In the wake of Kathryn Bigelow's best director win, Tom Hanks appears and announces that "The Hurt Locker" has won best picture without reminding us of all the nominees. There are 10 of them, after all, and even if they were introduced throughout the night, that doesn't mean we couldn't use a little suspense building, along with a glimpse at all of the honored filmmakers.

Best way to one-up your ex: By snatching two Oscars out of his hands in one night. "Avatar" is certainly an inspired film, not to mention the highest-grossing movie of all time. Maybe that's why it's particularly satisfying to see Kathryn Bigelow win best director -- the first woman to do so, by the way -- and best picture for her relatively humble film "The Hurt Locker." Suddenly her ex-husband (and our Lord and Savior and Creator of the Heavens and the Earth) Cameron seems not nearly as all-powerful as he did a few hours ago. Hurray for Bigelow! One small slap upside the head to the King of the World, and one giant step for womankind!