Liz Cheney wants to save torture's good name (and her dad's) 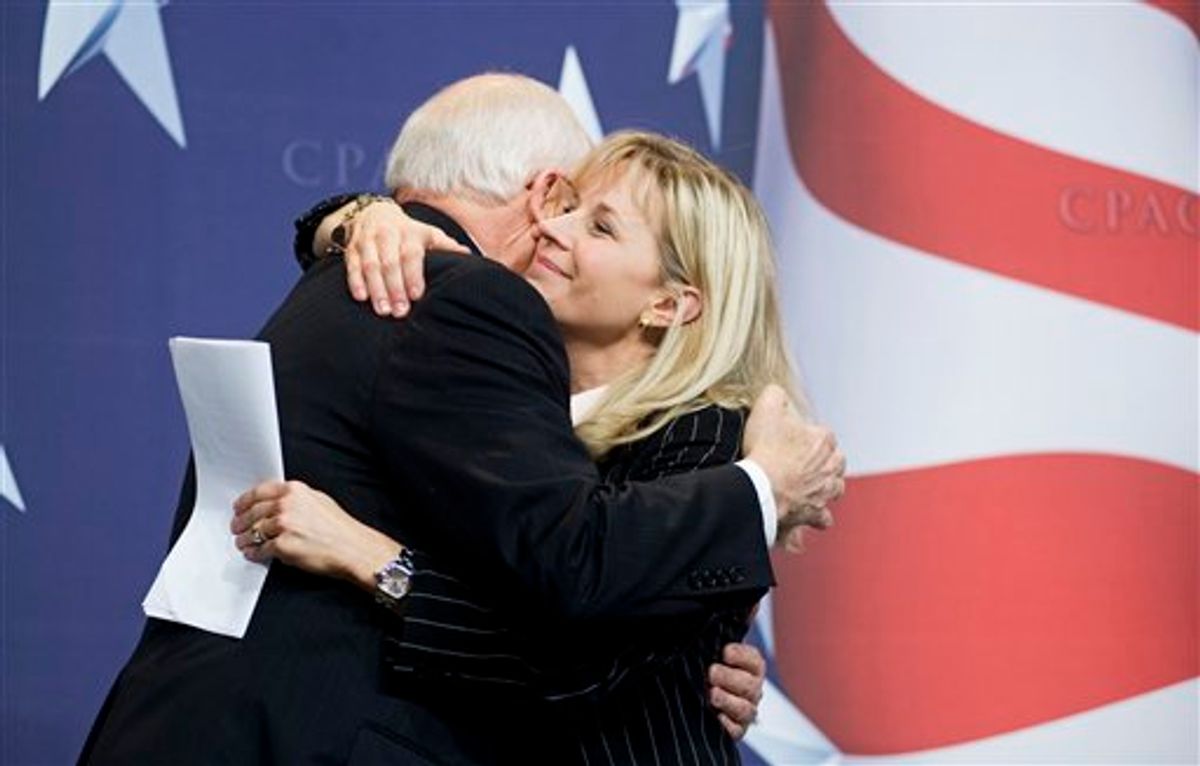 Toward the end of their term in office, President George W. Bush and Vice President Dick Cheney were fond of saying that they weren’t worried about their dreadful approval ratings. History would vindicate them, and that's what matters.

The trouble with waiting for history to vindicate you, though, is that it takes so damn long -- as in centuries after the fact, which is a little too late for gloating.  So it’s not hard to understand why a group of Cheney-philes is trying to speed up the process a bit.

But there's a catch: The effort to rehabilitate and revive Cheney-style politics doesn't revolve around the man himself. Instead, his daughter Liz has taken up the mantle. Running a now-infamous group called Keep America Safe, she's vaulted herself  to prominence.

Keep America Safe has been in the news recently for an ad it produced, in which it labeled seven lawyers representing Guantánamo prisoners the "al Qaida seven." This provoked outrage from just about everyone who's not a Cheney family member or close family friend. Over the weekend, a statement circulated criticizing the group and calling the video "shameful." Signatories include a number of moderate and conservative figures, and a number of past Cheney allies and former members of the Bush administration.

Cheney consigliere Bill Kristol is firing back the best way he knows. In his magazine, the Weekly Standard, Kristol yesterday went after his new critics as "shrinking violets" who are misrepresenting the issue. Call it a hunch, but I suspect the scales of history won't be tipped by this.

On the other hand, Liz Cheney seems to be planning something a little more aggressive. As rumor has it, at the urging of friends, family and GOP operatives, she's thinking of a run for Senate or Congress, either from where she lives in Virginia or the Cheney ancestral homeland of Wyoming. According to longtime Cheney friend former Sen. Alan Simpson, R-Wyo., Liz was especially hurt by what she saw as her father’s mistreatment at the hands of the press and even other Republicans.

Simultaneously, however, since as early as 2000 she’s been hearing that she’s a potential candidate, or even a potential president. Her new group seems like a clear dry run for her higher ambitions. "I was excited about Palin; I’m more excited about Liz," enthuses Michael Goldfarb, an operative with the group and a former Weekly Standard blogger. And, although her purpose in running would clearly be to resurrect her father's legacy and agenda, Cheney backer Elliott Abrams warns liberals against identifying Liz with Dick. "If you have a woman candidate and what you’re saying is, 'Don’t pay any attention to what she's saying, just pay attention to her father,' it's not going to be very long before people say, 'What kind of crap is that? This is sexism.'"

You really have to love a political effort that’s calling critics "shrinking violets" out of one side of its mouth and accusing them of sexism out of the other. (Also, Cheney's own sister Mary says, "I think you'd be hard-pressed to find any daylight at all between Liz’s and my father’s views.")

Of course, isn't clear yet exactly when or where Cheney is going to take the leap. But it looks like she will, and that her ambitions aren’t exactly small. If this is how the battle over the legacy of the Bush administration will be fought, then liberals could hardly have wished for a better opponent. Liz Cheney will give her father and his allies the crudest representation they could possibly find. She’s shown a willingness to attack the president with any weapon she can get her hands on: his birth certificate, pictures of Osama bin Laden, claims that he's kowtowing (literally) to foreign leaders.

So, not really a fresh break from the past yet. Moreover, her group, Keep America Safe, is bankrolled by a Florida strip-mall developer. If you wanted to put a face on the over-building that characterized the worst of the Sun Belt’s excess during the real estate bubble, you could do worse than to point to Mel Sembler. The developer, GOP fundraiser and former ambassador to Italy has urged Cheney to run for office, and says he's "as supportive as (his) budget will allow." Sembler also founded, with his wife, a chain of drug rehabilitation clinics called Straight, Inc., which ultimately folded under charges of abuse. As Reason magazine puts it, "At all of Straight’s facilities, state investigators and/or civil lawsuits documented scores of abuses including teens being beaten, deprived of food and sleep for days, restrained by fellow youth for hours, bound, sexually humiliated, abused and spat upon."

So there you have the rough outlines of a Cheney revival, coming into view: an agenda so discredited that advocacy for it consists mainly of crude and completely unsubstantiated attacks on opponents, funded by a Florida real estate magnate whose primary achievement appears to be bringing Abu Ghraib to American teenagers. It sounds to me like we should start clearing a couple places on Mount Rushmore for the two Cheneys already.