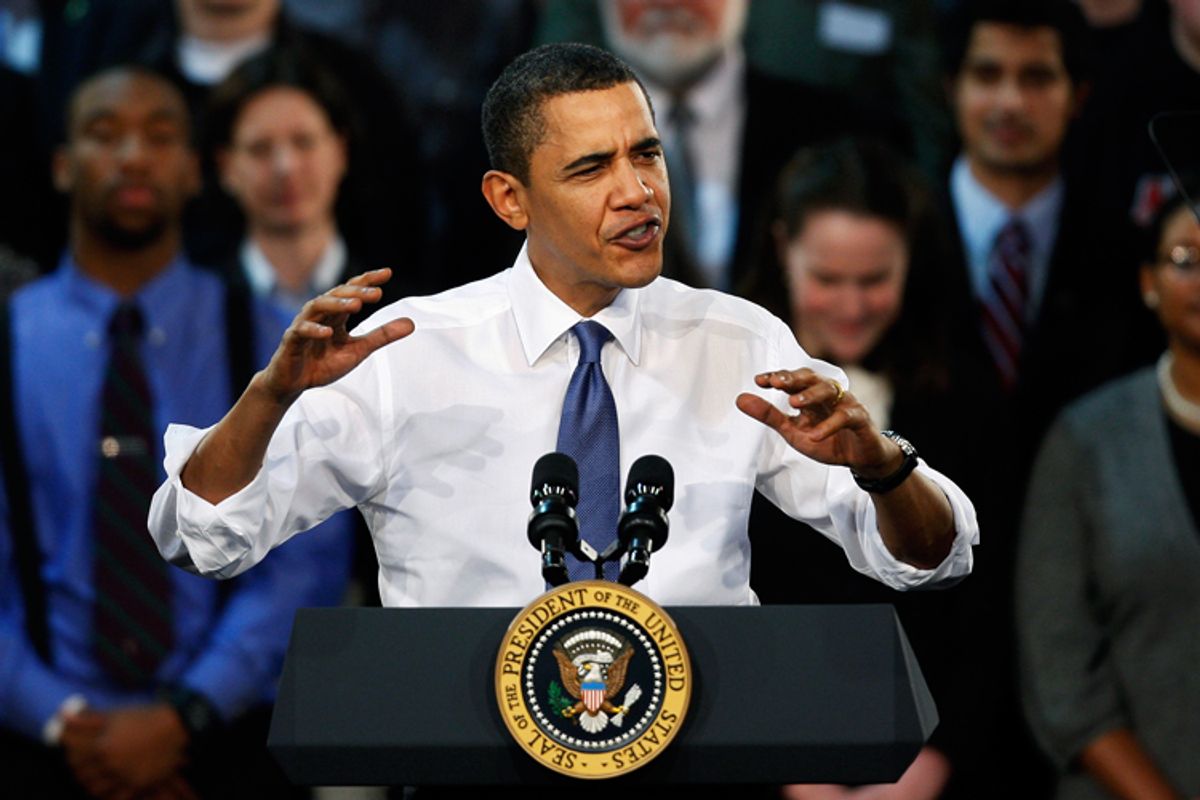 President Obama gestures as he speaks about health care reform on Monday at Arcadia University in Glenside, Pa.
--

Stirring memories of his campaign for the White House, President Barack Obama made a spirited, shirt-sleeved appeal for passage of long-stalled health care changes Monday as Democratic congressional leaders worked behind the scenes on legislation they hope can quickly gain passage.

"Let's seize reform. It's within our grasp," the president implored his audience at Arcadia University, the first outside-the-Beltway appearance since he vowed last week to do everything in his power to push his health care plan into law.

The president's pitch was part denunciation of insurance companies -- "they continue to ration care on the basis of who's sick and who's healthy," he said -- and part criticism of his Republican critics. "You had 10 years. What happened? What were you doing? he taunted members of a party that held the White House for eight years and control of Congress for a dozen.

The outcome could affect almost every American, changing the ways they receive and pay for health care -- and extending coverage to tens of millions more people -- if the legislation gains final approval.

"I'm kind of fired up," Obama said at the beginning of his remarks, a variation on his oft-stated 2008 refrain, "Fired up. Ready to go." And he included an appeal to his audience -- many of whom were students -- to help in the same ways they might in a campaign. "So I need you to knock on doors. Talk to your neighbors. Pick up the phone," he urged them.

Obama made his appeal as Democratic leaders in Congress worked on a rescue plan for legislation that once seemed on the cusp of passage, only to run into difficulty when Senate Republicans gained the seat they needed to block action on a final compromise.

The two-step approach now being pursued calls for the House to approve a Senate-passed bill from last year, despite House Democrats' opposition to several of its provisions. Both houses then would follow by approving a companion measure to make changes in that first bill.

In general, Obama wants legislation to expand health care to many millions who lack it, with subsidies to defray the costs for lower income families as well as small businesses. In addition, he has called on Congress to ban insurance industry practices such as denial of coverage because of pre-existing conditions.

Last week, in a follow-up to a daylong meeting with key lawmakers in both parties, Obama outlined several provisions he wants included in the second bill, at least some of which appear likely to be incorporated in some form. Several officials, speaking on condition of anonymity, said a Senate-passed excise tax on high-cost insurance plans would be scaled back in deference to objections from labor unions. In another White House proposal, a Senate-passed provision to raise Medicare taxes on the wages of upper income earners would probably be extended -- possibly at a higher rate -- to investment income such as interest and dividends as well.

The fix-it bill would also increase funds the Senate approved to defray the cost of premiums and out-of-pocket health care expenses for those at lower incomes who currently cannot afford health insurance. And it would gradually close a gap in coverage under the existing Medicare prescription drug program, a provision the House approved late last year and the White House backs. The Senate bill reduced but did not close the gap, but leaders have pledged support for the change.

Separately, some House Democrats have been lobbying to add to the health care bill unrelated legislation overhauling the nation's student loan programs. The administration has called for all federal student loans to be originated in the Education Department instead of through banks and other lenders. The government's savings is estimated at about $87 billion over a decade, money that would be put into larger Pell Grants and other forms of student assistance. A stand-alone measure has cleared the House but is stalled in the Senate.

The White House has called for action on the broad health care legislation by March 18, but it seems virtually impossible for Congress to complete both bills by then. Officials said they did not expect the follow-up bill to be disclosed publicly until the end of the week at the earliest, and possibly not until next week.

Under the Democratic blueprint, the fix-it bill would come to the Senate under rules denying Republicans the ability to demand a 60-vote majority to clear the way for passage.

Obama's speech on Monday drew fresh criticism from Republicans in Congress, as well as a retort from the insurance industry.

"Americans don't want this bill. They're telling us to start over. The only people who don't seem to be getting the message are Democrat leaders in Washington," said Sen. Mitch McConnell of Kentucky, the Republican leader.

Robert Zirkelbach, a spokesman for America's Health Insurance Plans, said insurance industry workers "do not deserve to be vilified for political purposes. ... For every dollar spent on health care in America, less than one penny goes toward health plan profits. The focus needs to be on the other 99 cents."

Obama has long identified the insurance industry as an obstacle to changes along the lines he seeks, but the administration's actions and rhetoric seem to have escalated in recent days.

The president's proposal would give the government the right to limit excessive premium increases -- a provision included after one firm announced a 39 percent increase in the price of individual policies sold in California. Kathleen Sebelius, the secretary of health and human services, convened a White House meeting with insurance executives last week, and followed up with a letter released in advance of Obama's speech.

It asks companies to "post on your Web sites the justification for any individual or small group rate increases you have implemented or proposed in 2010."