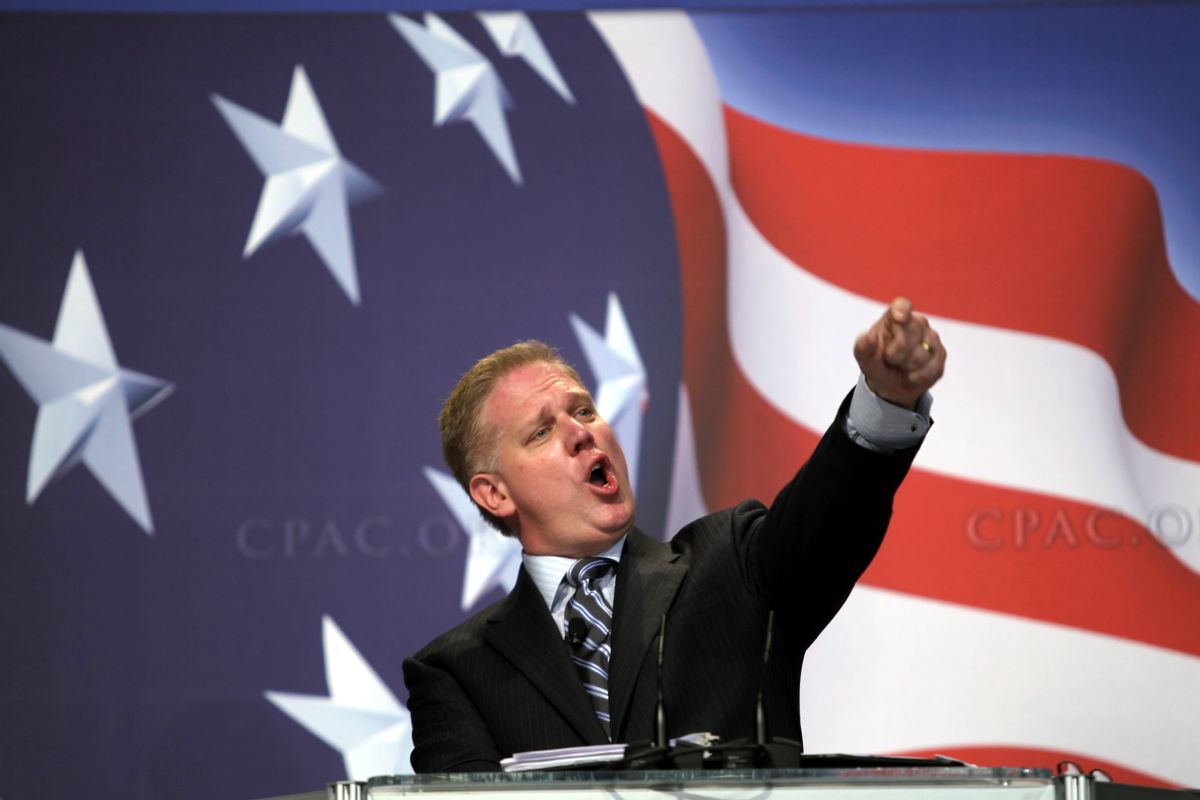 6:08 p.m.: One final thought about the trainwreck that was this interview. The whole thing may best be summed up by a quote that Tom Tomorrow tipped me to. Here's Beck, talking about Massa during his radio show on Monday:

Who is this guy? Stop! Stop. I want to change the show. This needs to be our lead tonight at 5:00 and get this guy on. I don't have, I don't have guests on. We just don't and we certainly don't lead with a guest. This guy is the guy we've been looking for!

Beck had very little idea who Massa was or what he wanted to talk about. He simply wasn't prepared for the interview -- he just knew that the former congressman had said some things that tended to support his worldview.

This is where we really see the limits of an approach like Beck's. His schtick -- former wacky morning DJ turns guy who's singlehandedly saving America by exposing what they don't want you to know -- works fine when it doesn't involve actual knowledge or reporting. Once he needs that, though, things can fall apart very quickly.

As Salon's Mike Madden put it on Twitter, "Beck's lesson: conspiracy theories much easier to spin without bothering to 'interview' people who would 'know something' about the 'facts.'"

6:00 p.m.: Beck, back at his chalkboard and without Massa, circles one of the questions he asked the audience to consider earlier -- Do you believe what he says about corruption? And if so, does it affect you?

"This is why I said I'm sorry I've wasted your time," Beck says. "We learned a lot -- I think -- but what we learned I don't think affects you at all. From New York, goodnight America."

And with that,he turns and starts walking off the set.

5:55 p.m. "I have wasted your time," Beck says to the audience, and apologizes, then goes on to castigate Massa.

This has been embarrassing for Beck, and he knows it. He came in unprepared and far too ready to believe that the former congressman would have some actual evidence for or substance to the charges he's made.

5:53 p.m.: Beck asks if there's another shoe that's going to drop. Massa basically says there is -- talks about people in Washington being willing to say anything. Then he talks about text messages: "We bantered back and forth all the time," he says.

Little piece of advice for Massa -- and, well, pretty much everyone: Do not ever admit something like that on national television.

5;47 p.m.: Back from commercial, Beck tries again to press him for specifics on "corruption." He might as well be screaming, "Tell me bad things about Democrats!" But Massa either doesn't get it or he's ignoring it, talking instead about how both parties whip votes in the House. As Massa is saying this, it looks like Beck's eyes are going to pop out of his skull.

And then Massa goes on to admonish people in general to stop calling fellow Americans names. Like "Communist." If everyone started following this rule, Beck's show would become a guy standing silently in front of a blank chalkboard for an hour. So yeah, this doesn't go over so well.

5:42 p.m.: Beck's now sounding pretty pissed. Massa simply doesn't seem to get what the host wants from him -- maybe he's not a regular viewer? So Beck goes to commercial break again, making it fairly clear that he tried to explain what he wanted out of Massa during the last break. He lays it out before going to commercial, telling the former congressman, "I haven't heard anything. I've heard generalities. Let's take a break -- let's take a break. Let's go back to: We've had the Rahm Emanuel, maybe let's go back there. What specifically did he do? There's actionable stuff there, so why wouldn't we start with that?"

5:40 p.m.: Beck's trying to get the dirt that Massa basically promised him when he went off on the radio this past weekend. Massa starts talking about campaign finance reform, which is exactly not what Beck wants to hear. The host holds his hand over his mouth, looks pained, maybe a little angry.

"Tell me something about the unions and how the unions are working," Beck says. He's basically begging for some dirt on one of his targets -- the White House would be great too, he says -- right now. And it's not working.

5:31 p.m.: Suddenly things are about Beck, as he goes off on a little rant: "Do you realize my family is at stake? You've got a little scandal with your children in college. I've got one for all time now, because I'm not going to resign, I'm not going to back down. I've come to a place where I believe the system will destroy me. That's OK, because I'm doing what I can to pass on a better system for tomorrow."

He does bring this around to Massa, though, saying he's puzzled by the former congressman putting up a "white flag" and resigning.

Then we're off to commercial, but before that, Beck tells Massa to "make a difference" in the half hour still to come. "Name names," the host says. "What do you know that we need to know?"

5:29 p.m.: Beck's now moving the interview to ground he's much happier on -- talk of broken systems and corrupt Democrats. (Though the two men do disagree on Massa's criticism of lobbyists' money, which the former congressman says is basically legalized bribery. Beck doesn't like that.)

Also, they talk about something Massa alleged this past weekend, a confrontation between him and a naked Rahm Emanuel in a shower. Massa's standing by it, says he'll never forget it.

5:18 p.m. Massa has brought an x-ray of a tumor in his lungs (he had cancer in the 1990's that was supposed to be fatal, and a new cancer scare in December). Even by Beck's standards, this is getting over the top, and the host himself seems to be backing away from it.

BECK: So why are you here? Out of all the shows you could pick ...

MASSA: I want the toughest, most unforgiving interviewer possible.

BECK: That would be Bill O'Reilly.

5:12 p.m.: Already we've got two different pictures of what Massa's going to do here. On the one hand, as soon as he came on, it seemed like he wouldn't give Beck what he wants -- he said he wasn't forced out, but that he "forced myself out." He added, "I own this." And he said that though he took "full and complete responsibility" for what he's done, he won't talk about it.

And then he talked about it, specifically discussing the new allegations in a Washington Post report from Tuesday afternoon. He suggested the timing of the story was odd -- which conspiracy-minded Beck loved, of course. And then he went on to make things much worse for himself:

"Now they're saying I groped a male staffer. Yeah, I did," Massa said. "Not only did I grope him, I tickled him until he couldn’t breathe and then four guys jumped on top of me. It was my 50th birthday. It was kill the old guy. You can take anything out of context."

Massa also said he "never should have allowed myself to be as familiar with my staff as I was." in response to a direct question from Beck, however, he said he did not ever touch anybody sexually.

I'm going to be asking pointed questions," Beck says, and then goes on to make some very odd point about men in the U.S. having the right to face their accusers, rather than be subject to whisper campaigns.

5:01 p.m.: And away we go. Beck tells us he has no idea what's going to happen -- "it's going to be a wild and interesting hour," he says. Says people on the left and on the right don't want this interview to happen, that it could blow up after five minutes and that he's got guests scheduled as backup just in case.

"He is not on my side," Beck said. "He is a gigantic progressive."

Beck and I agree on this: This will be interesting.

Beck announced Monday that Massa would be on for the full hour of his Fox News show, and he's been promoting the former congressman's claim that Democrats pushed him out of the House because he was a no vote on healthcare reform. Now, though, the two will have to deal with a new report indicating that harassment allegations against Massa are much more serious than he's been letting on.