"Damages": Clash of the she-lawyers 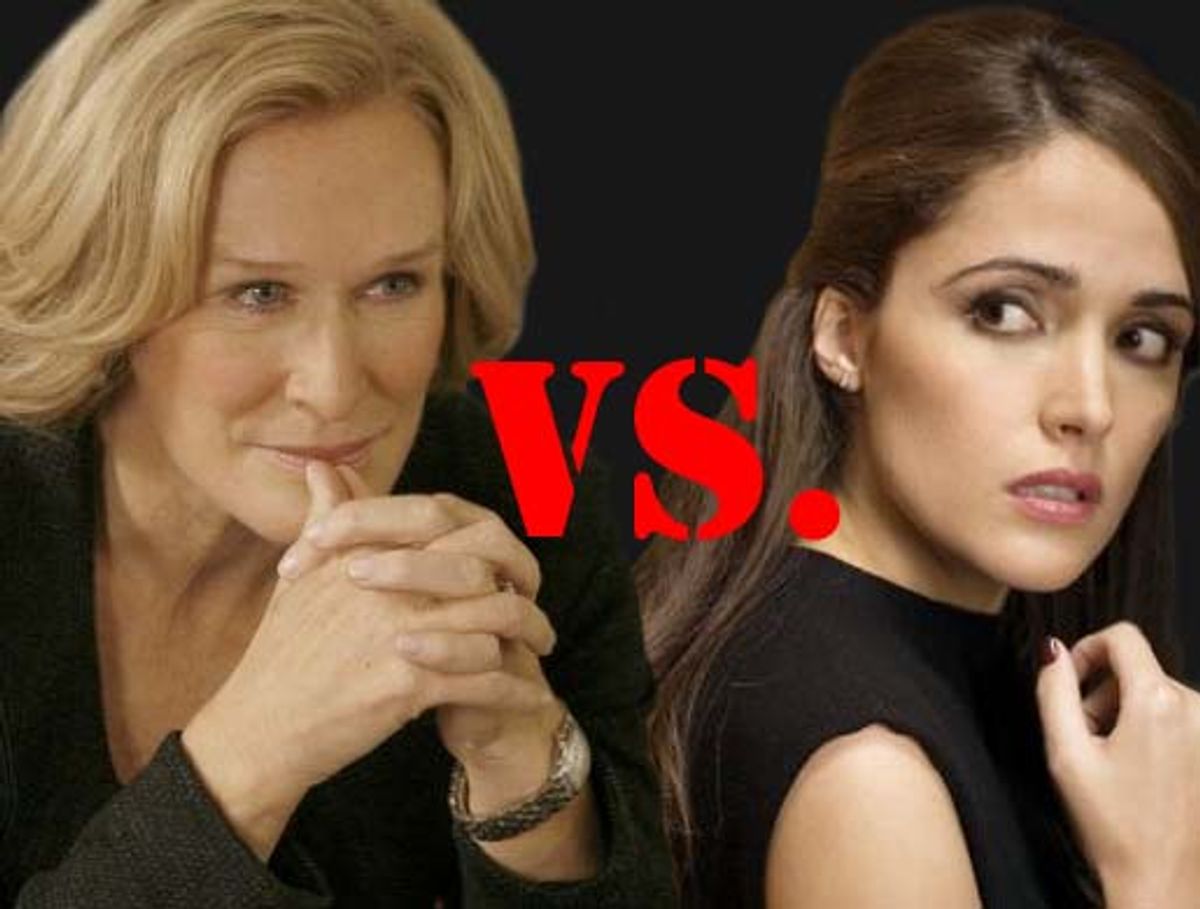 The perverse appeal of the catfight, from the spectator's perspective, lies in watching two women reduced to their basest, least restrained selves, usually over some man whose worth is questionable at best. Catfights (or, more typically, one-upmanship that's cast as a catfight simply because two women are involved) make both women look powerless, frantic, hysterical -- traits that have been used to marginalize women since Sigmund Freud was diagnosing the insanity-inducing traits of the uterus, Salvador Dali and Phillipe Halsman were throwing water, naked women and cats into the air, and the Romans were tweeting repetitively about Bacchanalian cults (#BacchanaliaWTF?).

Perhaps it's this historical depiction of females as unable to confront each other without jumping into the nearest swimming pool and ripping each other's blouses off that makes the growing love/hate chess match between Ellen and Patty on FX's "Damages" so compelling. Having indoctrinated Ellen (Rose Byrne) into the cutthroat world of high-priced lawyers by baptizing her in her fiancé's blood, Patty (Glenn Close) still refuses to acknowledge any animosity between the two of them. Instead, she gives Ellen expensive gifts, sends Ellen's "replacement," Alex (Tara Summers), to Ellen for advice, or calls Ellen at 4 a.m. to invite her over for dinner, purposefully telling her the wrong night so that she'll show up and find Alex and Patty working closely together over a bottle of red wine.

At first, Ellen is straightforward. She tells Patty, "If you want to talk to me, don't play games. Just pick up the phone and call." She believes that working for the assistant district attorney is her true calling and will deliver her from the evil of Patty's ways. But as the Bernie-Madoff-alike Tobin case unfolds, Ellen realizes that Patty gets results in ways that her naive and politically motivated overlords never will. She's also romanced by Patty's odd mix of flattery and ulterior motives; she's transfixed by this woman's manipulations, her deviance, all hidden by her "Who me? Don't be silly!" mask, which Close brings to life with some deliciously malignant undertones.

This subdued standoff was the highlight of Monday night's episode, which left us guessing about what the hell Patty is up to, what Ellen is trying to pull, and whose side anyone is on in the end. What's brilliant about "Damages," though, is that the exact alignment of these women, what their aims with the Tobin case are, or whether they love or despise each other underneath it all, hardly matters. They're locked in some twisted battle or dance or duel or sophisticated game of one-upmanship, and they're both being fed by it. The best moment of "You Haven't Replaced Me"? When Ellen, in bed with her new do-gooder boyfriend who's obviously a pawn and not a real partner, puts down the phone after Patty's rude, aggressive 4 a.m. call, and smiles. She matters to Patty -- either as a pawn herself, or as an ally, or as a foe. Somehow, this gives Ellen a charge. Whoever wins or gets the last word or falls the hardest for the other's charms/trip wires, one thing is for certain: In Ellen, we're seeing a young Patty, drawn in by the lures of intimidation, power and victory at any cost.