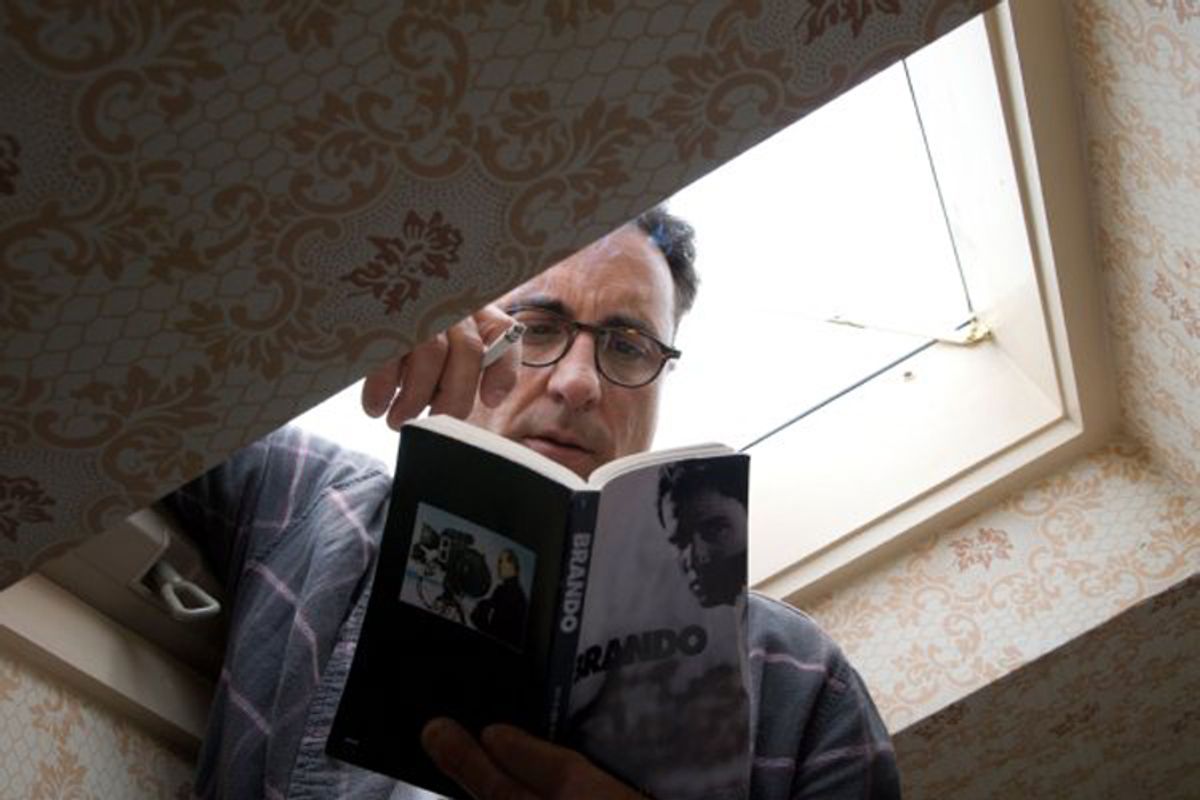 One afternoon in the winter of 2007 I drove out to the San Fernando Valley, to a modest house where I was scheduled to meet Andy Garcia. The house, which had been an early home of his family's but was now used as an office, was filled with memorabilia -- pictures, letters, awards -- attesting to the incredibly rich and varied career Andy has had over 20-plus years in the business. In time I would come to think of the house as the Museo de Andy Garcia -- but on that first day I paid only cursory attention to the stuff surrounding me. Instead I was face to face with an actor I'd long admired and a man who, clearly, was the Vince Rizzo I'd been seeking for more than five years.

We sat in the garden and talked of many things -- life, music, movies, family. Personally, I think this first conversation between an actor and filmmaker is the most important one. Nothing creative need come out of this first meeting -- for nothing is more important than both actor and director getting a mutual sense of comfort and understanding about some basic philosophical things. If the air is muddy early -- if a basic air of unease permeates things from the beginning -- it will never get better.

When our talk finally turned to the script, Andy did something I'll never forget. Rather than getting into a long talk about the character of Vince, he stood up and said he'd thought of something that Vince might do at the end of the movie, when the whole family is exploding in confessions about their secret lives. I watched and waited ... and then Andy twirled around in pain, agony and exhaustion and sat down on the ground holding his head, defeated and incongruously (and literally) floored. The gesture was perfect -- both humorous and genuinely pained. In a sense, we never needed to discuss much about Vince again -- this is the kind of  thing that lets you know an actor truly "gets it." The gesture survives -- it's in the movie and it works wonderfully well.

Before the day was over, we'd made another kind of connection. Both of us are, essentially, entrepreneurial in spirit; I have never thought of myself as working "for" anyone (to my own detriment at times, but still, that's who I am) and have always looked at every movie as a sort of start-up business, one that with a few good breaks will turn into the long-awaited cash cow that all entrepreneurs dream of.

And Andy is not just an actor. He's a producer, a filmmaker, a musician and a supporter of anything in those fields he believes in. My feeling was that, between us, we were sitting with most of the firepower we needed, if it was harnessed correctly. So without much thought about it beforehand, I simply proposed that he and I become partners -- co-producers -- on the movie. Together we would find a way to mount it -- cast it, finance it, the whole thing. Remember, we had nothing but a script, a director and an actor. But the actor was so right for the script ... and the director came cheap.

First stop would be letting some of the better companies know that Andy was attached to a new project -- a script that we both thought would be regarded not as an "art film" but as a highly accessible family comedy. Our lives would be considerably easier if Sony, say, or Fox Searchlight jumped on board and helped pull the movie together.

I believe we went out to Sony, Fox Searchlight and Paramount Vantage. All three passed. Now, while this isn't unusual at all -- what's truly unusual is when they want to do something -- it still always chips away at a little bit of your heart. It's like somebody turning down your kid for something your kid wants to do. (Like maybe he wants in on the wrestling team but is too wimpy? I don't know -- you know the feeling I'm getting at.)

To put what a "pass" truly means into perspective, let me jump ahead about three years to just a couple of months ago. I'm sitting down with an executive at a production company on the Warner Bros. lot. "City Island" is by now a finished film, which she likes. In fact, the executive tells me, she read it back when it was submitted to Paramount Vantage, where she was then an executive. She thought it was terrific back then and knew it would make a good movie.

I couldn't help but ask: "Then why did you guys pass on it?"

She shook her head, threw her hands up and said words to the effect of: "Changes in executive structure ... in-house priorities changing ... company wanting to go in a different direction ..." Et cetera. In other words, it had little if anything to do with my script and star. And this is probably the truth -- that most things don't happen in Hollywood simply because the white noise of the business creates its own chaos and confusion and it's easier to simply ... pass.

I suggested that we send it out to some actors for other roles and start building up the cast. Andy agreed and we brought in Sheila Jaffe, who had cast my previous films, to start helping us with a list of names and some ideas as to availabilities. One of Andy's best traits emerged here -- that of being completely behind the material and willing to reach into his phone book if necessary to get the script out to actors he knew. It's a little hard for me to remember all the names now, but two of the early submissions we made were to Michelle Pfeiffer (for the role of his wife) and Justin Timberlake for the role of his son. Timberlake knew Andy and got back -- via his manager -- fairly quickly to say that he liked the script but was about to begin an endless tour and so couldn't commit. Fine. A nice pass, but a pass nonetheless.

The real surprise, though, was Michelle Pfeiffer. I think she was our very first stop and her CAA agent called to say that she liked it. It wasn't exactly a "yes" -- more of a "Wait and see ... she's reading other things ... liked the script and likes Andy." (The two had worked together once before.)

And then, after a few weeks of nothing, she passed as well.

And then, in what seemed like a flash, two different actors suddenly expressed interest, which led to a third actor expressing interest. Marcia Gay Harden read it and liked the role of the wife. Chloë Sevigny read it and liked it (for the role of Molly, Vince’s muse and acting class partner). And Marcia Gay Harden's agent also represented a young actor named Steven Strait, who wanted to meet me about the role of Vince's older son.

I met Marcia Gay Harden at the Four Seasons Hotel in L.A., where she was getting ready to do a slew of promotions for a very good movie she did with Richard Gere called "Hoax" (concerning the author Clifford Irving, who wrote a fake autobiography of Howard Hughes). It must have been mid-morning on a weekend, because the dining room/salon was eerily empty -- she walked in looking around a little perplexed, as if everyone had been evacuated for some reason.

We introduced ourselves, I told her how much I liked her work, she said nice things about the script. And then an interesting thing happened: She began to interview me. Or so it seemed. Rather than let the meeting be about me checking her out for the role (which it never really was to begin with), she made sure -- with grace and skill -- that the shoe was on the other foot; was I a clear-headed, together enough filmmaker for her to be willing to work with -- that seemed to be the guiding vibe of the first part of our conversation. I love when actors take situations in their own hands and so I was more entranced by the shift than thrown by it. After awhile we seemed to relax into everyday stuff. I remember talking with her about her kids, my son, where she lived in New York, etc. She was at once frank, funny and just self-protective enough to send you a clear message: She didn't go where she wasn't comfortable. No way.

Fortunately, she was comfortable enough to allow us to go ahead and use her name to help get the movie up and going. She was excited, I was delighted.

Next I met Steven Strait. Since the Four Seasons had been good luck for me with MGH, I suggested it as a possible meeting spot. The time was early evening on a Saturday. This time the place was jammed. Loud. Oppressive. As showbizzy and uptight and see-and-be-seen, if-you're-nobody-then-piss off, as you could imagine. I instantly regretted the choice -- this young actor whom I'd never met would no doubt think I was yet another glad-handing, West Hollywood-cruising, scene-making, showbiz-addicted wannabe. Indeed, I remember thinking to myself, maybe I really was all of those things and it was time to face who I'd become.

Fortunately Steven -- young in years, aged in wisdom and serenity -- didn't seem to care one way or the other. He is such a commanding presence -- not just because of his super-handsomeness, but because of his aforementioned calm, his sweet and accepting nature -- that the role reversal here was similar to my meeting with Marcia but for different reasons. People looked at us, wondering who the middle-aged shlub was, lucky enough to be sitting and hanging out with the young handsome actor who was in that caveman movie. I'm sure most of them thought I was a publicist of some sort. Or, more likely, a journalist in search of a raggy little interview ...

Next was Chloë Sevigny. I bet you think I met her at the Four Seasons. Well, no. She was in L.A., doing publicity for "Big Love" and they'd put her at the Chateau Marmont on Sunset. So we met there. This time, Andy Garcia accompanied me and I remember sitting out in the pretty, smog-choked patio garden talking with her about the role of Molly. She liked the script and liked the other cast we had.

There was one thing about Chloë that I remember thinking was a just a bit ... well, let's not say strange, since we are talking about the costar of Vincent Gallo's "The Brown Bunny" and so strange is perhaps to be expected. I remember thinking, though, that there was a slight tinge of puzzlement, of not quite seeming to know why we were so interested in her for the movie. She was demure about her abilities -- charmingly so and incorrectly, I think -- and didn't delve deeply into the script or role. Things stayed pleasant and on the surface. It didn't bother me and at the time I put it down to actor insecurity -- actors really do come in all shapes and sizes and not everyone has the personal command of Marcia Gay Harden, or the cool charm of Andy Garcia.

So we had four great actors attached to our script. It was early fall, 2007. We'd been at work on the project, Andy and I, for almost a year. Not a bad place to have gotten to. Alas, still not one red cent toward production seemed to be in view.