Winner: The tea that caused a Singapore scandal

I wanted to savor a delicious cup at the city-state's most regal establishment, but the staff's racism kept me out 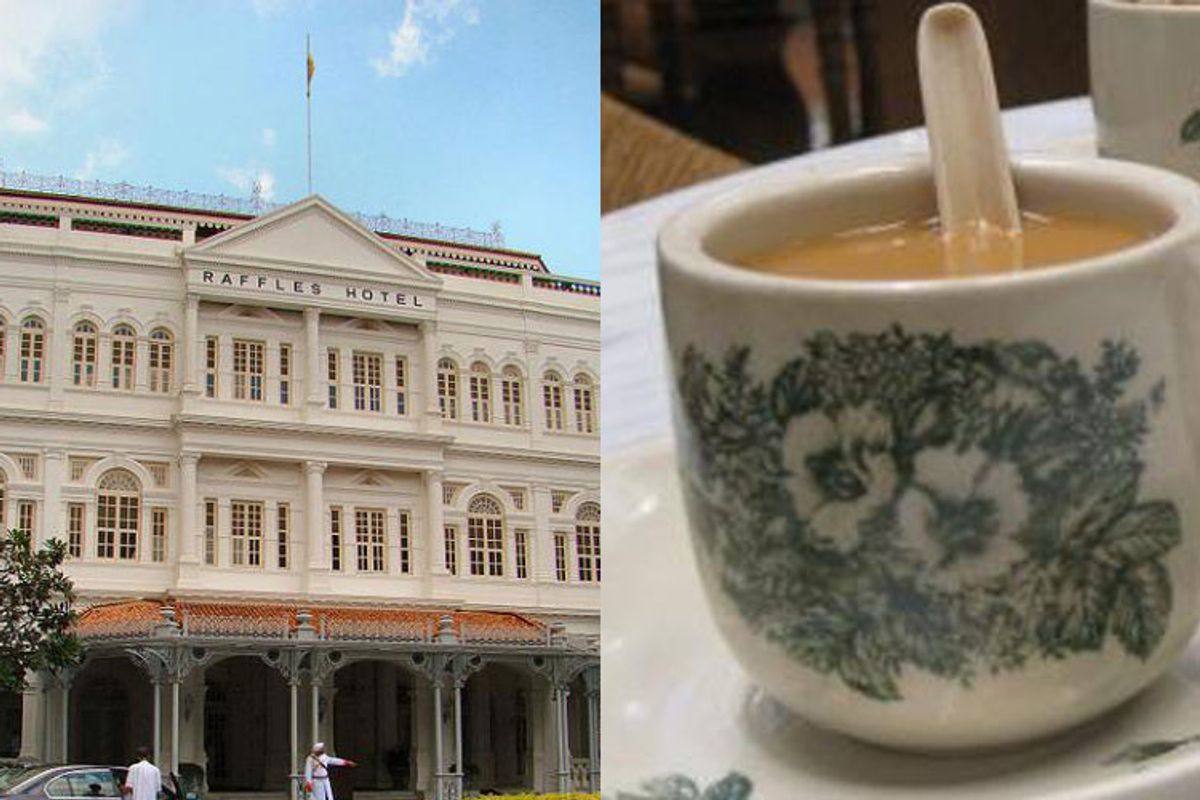 This winning entry for the Salon Kitchen Challenge -- in which we asked readers to come up with their most delicious hot drinks -- comes to us courtesy of Linda Shiue. Check out this week's Challenge here.

Singapore, where I spent most of my junior year of college, gained independence from England only in 1965, and many remnants of British culture remain in this still-young country. This is where I first adopted the ritual of afternoon tea. Afternoon tea in Singapore is incongruous in many ways. First of all, Singapore's tropical heat and humidity could beat the conditions in a wet sauna; I could not understand why anyone would willingly drink cup after cup of nearly boiling tea in that weather. (I later understood the traditional Chinese medicine concept of drinking hot liquids to cool the body.) Second, I already liked my tea English-style -- strong, black tea with milk. I was affronted, horrified, and I'll admit, scornful of what the locals knew as tea. Yes, it was black tea, mellowed with milk. But it was also thickly sweetened with condensed milk and often not brewed fresh, but made from an instant powder.

The tea served at the Raffles Hotel, on the other hand, would certainly be more like in the Motherland, England: refined, delicate and just-so. But I wouldn't know, because I never had the privilege of having a cuppa there.

The story behind this is the tale my husband has heard thousands of times over the last almost 20 years, the one during the telling of which he actually will cover up his ears, even in the company of people we might want to impress, or at least not scare away. But it is a good one, so I will share it with you, my new audience.

I was a student (i.e., poor), I was from a liberal university (i.e., a little bohemian), and it was hot (definitely no stockings for me, regardless of the dress code). I had been living there for at least four months at this point, and while I was no longer dripping sweat constantly, I could not wear the sweaters and tights that the local girls could, as if they were in merry old England. There was a lot of excitement surrounding the grand reopening of the famed Raffles Hotel, which had undergone its first major renovation in the years prior to my arrival. This is the place that invented the Singapore Sling (another too-sweet drink) and the former hangout of Somerset Maugham, in the days when tigers might have still been found roaming the streets of this former jungle. It was the archetype of British colonial architecture and society. As such, "she" was considered a venerable institution, to be respected.

So I combed my hair, which went crazy wild in that humidity, put on a neat outfit of a top and shorts, and excitedly walked inside, where I saw lots of other tourists milling about, in similar or even more casual attire. I gazed at the beautifully restored woodwork, and made my way back toward the famed Long Bar to have a taste of the Singapore Sling, at its birthplace. But I didn't quite make it there. I was stopped by a uniformed employee, who gently directed me outside. "No shorts are allowed. This is an expensive hotel."

"Pardon me?" I asked. "What about all those other people?" I gestured to the long-haired Australians in their board shorts and flip-flops, lounging casually and having a raucous good time.

"They are guests here."

I was embarrassed, but wondered what made me look like someone who could not possibly be a guest at "an expensive hotel." It wasn't my clothing that made me stand out. In fact, I suspected that my welcome was because I didn't stand out-- I looked like a "local."

I discussed the incident back in the hostel's canteen (dorm cafeteria) with my local friends. They immediately and unanimously concluded that it was the customary discrimination against locals, while pandering to Western (appearing) tourists. They shrugged it off, it was such a commonplace occurrence to them. But I was enraged, on my own behalf but also theirs.

I wrote my first ever letter to the editor to the Straits Times, the local/national newspaper (it's a very small country), in which I implied that the hotel had race-based double standards. I kept the clippings from my letter, which I think still emanates heat 20 years later. In it, I concluded, "It reminded me of what the glorious Raffles must have been like in colonial times -- attentive Asian staff catering to every caprice of their esteemed Western guests. Perhaps the newly renovated Raffles hotel should also update her thinking."

Like a harbinger of blog posts gone viral, this letter generated a month of responses. A few sadly sympathized that there were post-colonial attitudes, but the vast majority threw insults at me, someone they had never met or seen. I was called "scruffy and sloppy." The best insult was "Raffles hotel is no place for ...  scruffy or unkempt visitors. For these people, there are lots of coffee houses, beer lounges, karaoke joints and perhaps even hawker centres."

The Sunday Times had a full editorial dedicated to the subject of ... me. And the major tabloid did an investigative report where they sent two journalists, separately, to reenact my actions. One was Caucasian, one was a local Singaporean Chinese. They were both dressed in bike shorts (I would never!), and each went in the lobby, as I had done. In the end, both were thrown out, though the Chinese one by a good 10 minutes earlier. The conclusion was that there was no discrimination. Yes, these were my 15 minutes of infamy.

So, very long story short, this is why I never got to have afternoon tea at the Raffles. I am sure it is lovely.

But for the riffraff like me, I got to drink with the locals. You could wear anything to the kopi tiams, or coffee houses, all over the city. Most people wore flip-flops, T-shirts, shorts, and the older men would wear their uniform of yellowed cotton tank tops, scruffy shorts or pajama pants, and flip-flops. I learned to love the condensed milk sweetened tea. I also enjoyed two other variations, all considered somewhat crass, and favored by recent immigrants or serious local food buffs: teh tarik and teh halia. Teh tarik, Malay for "pulled tea," is the same strong and sweet black tea, but poured from great heights between two cups to create a bubbly froth on top. Teh halia is a potent black tea, again sweetened with condensed milk, offset by a spicy ginger bite, and lightened with the tarik method.

These hearty teas would overpower the frou-frou tea sandwiches that pair well with English teas. Instead of those, you might have kaya toast, thick cut, heavily buttered and spread with this coconut milk-based jam. Or you could have otak-otak, a fish paste grilled in banana leaves. Plain roti paratha (Indian flatbread) or murtabak, a spicy meat filled flatbread served with a curry sauce, make good accompaniments as well.

Any of these teas would make a great hot drink for a cold winter's day, or for a hot (or hot-headed) one in the tropics.

2 cups of coconut milk (ideally from two fresh coconuts, but canned is more than fine)
10 large eggs
1 1/2 to 2 cups of granulated white sugar, adjusted to taste
1 teaspoon pandan extract (extract of a tropical leaf, added for both fragrance and green color. May be omitted.)