Arlen Specter is in trouble -- unless he's safe

One poll shows the Pennsylvania Democrat losing to Pat Toomey -- big. But another puts him ahead. What gives? 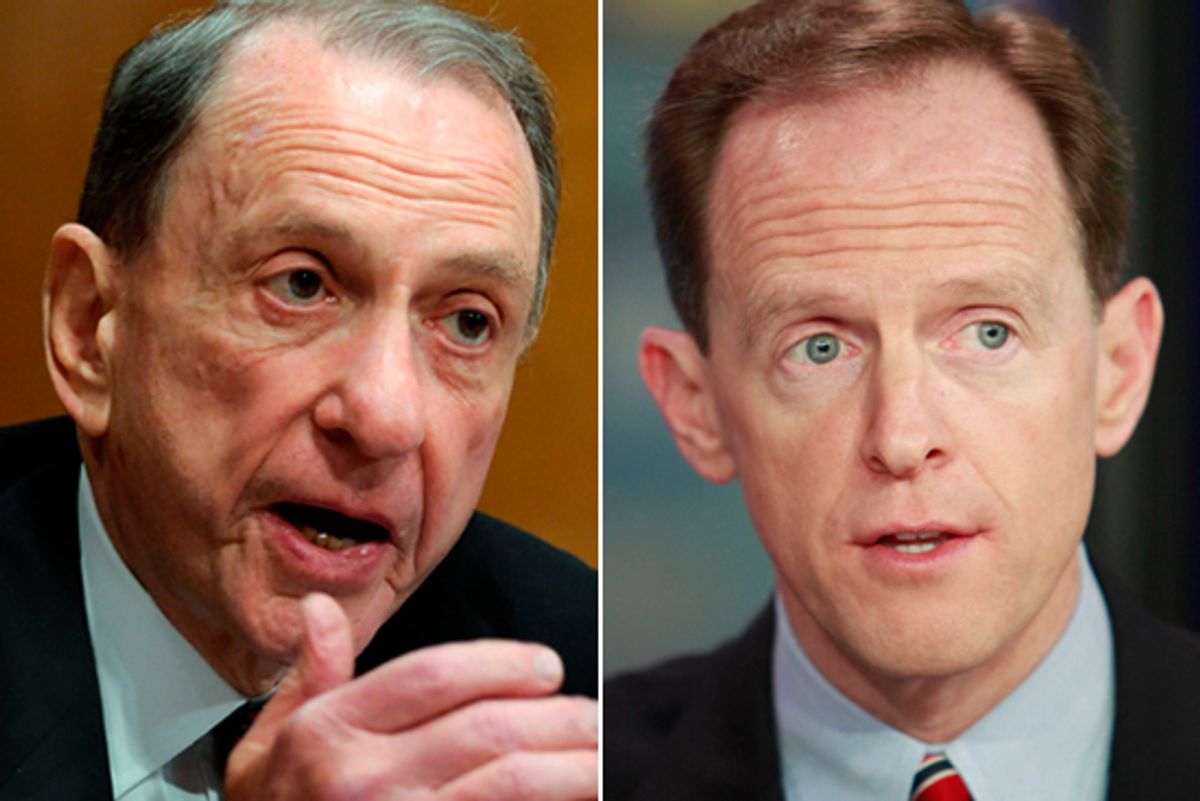 Arlen Specter is stuck in a deep hole as he seeks a sixth term in the U.S. Senate. No, wait -- he’s actually in decent shape, running ahead of his potential Republican opponent. Both of these statements are actually supported by the numbers. It just depends which pollster you believe.

Specter, should he prevail against Rep. Joe Sestak in Pennsylvania’s May 18 Democratic primary, will face former GOP Rep. Pat Toomey this fall. Specter barely beat Toomey in the 2004 GOP primary, and the prospect of a rematch against an even-stronger Toomey this year helped prompt Specter’s switch to the Democratic Party a year ago.

At first, Specter’s plan seemed to backfire. Polls started showing him losing the general election to Toomey -- although many of these surveys came from  Rasmussen Reports, an outfit that, some have noted, has a knack for portraying the GOP’s poll standing in rather favorable light.

Rasmussen’s most recent poll of the race, conducted on Feb. 8, showed Specter losing to Toomey, 47 to 38 percent.  But then, a twist: A March 2 survey from the more reputable (if less prolific) Quinnipiac Polling Institute gave Specter the lead, 49-42 percent.

So, which poll is right? Actually, they both might be (at least for now). The reason has to do with the one major difference in their methodologies: likely voters vs. registered voters.

Many pollsters are reluctant to sample "likely voters" this far from an election, as it’s hard to predict who’s planning to show up. Quinnipiac falls into this category; it sampled "registered voters," without asking who’s likely to vote. Rasmussen, however, has been using "likely voters" for all of its (many) polls this campaign cycle.

Notably, a third polling organization, from Franklin & Marshall College, was in the field around the same time as Rasmussen and Quinnipiac.

This suggests a serious problem for Democrats this fall. The “unlikely voters” who are weeded out from registered voter polls are the young, the poor and people of color. When these constituencies show up, the results are usually good for Democrats (as in Barack Obama’s 2008 victory). But when they stay home, it gives the GOP an opportunity to achieve a 1994-like result.

To survive 2010, then, the challenge for Democrats is clear: They must turn unlikely voters into likely voters. And the clock is ticking.