What Biggie Smalls' lyrics taught me about food

On the anniversary of the Notorious BIG's death, a collection of his fine culinary rhymes. Pour out a little gravy 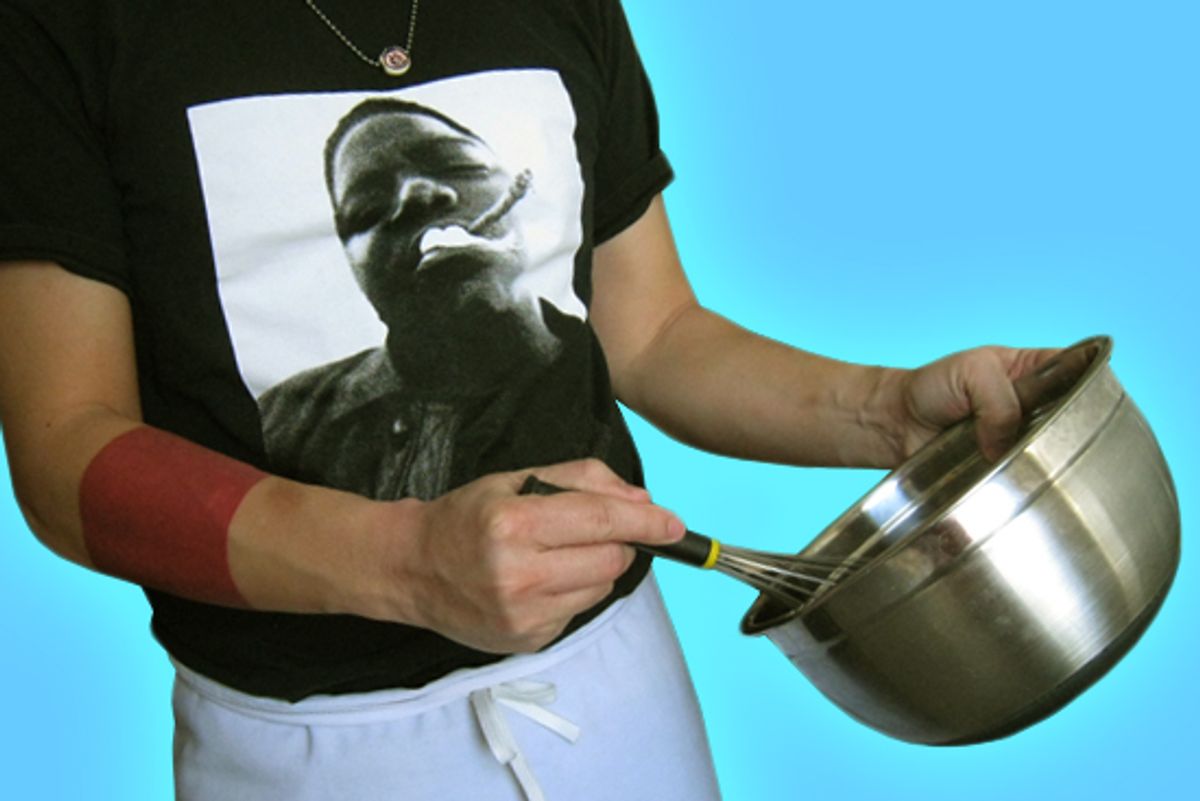 Cooking for the Notorious B.I.G.
--

I didn't think much of Biggie Smalls while he was alive. He had a few hits, he had ridiculous sunglasses, he was the opposite of a handsome man and he rapped about his girl-stealing suavity with a mushy mouth. But after he died, after I wondered why there were marches in the street for him, after my friend Eric handed me a cassette with the words "Best of Big" scrawled on the label, I came to love him, in that way where the best artists become, you hope, a part of you. He rapped about the life of a street hustler-turned-playboy, about blunts and broads and sex in expensive cars, but along the way he taught me who I would be as a writer on food.

Biggie's rhymes hum with complicated life. He took the invisible details of his world -- the cry of a killed rival's baby daughter; a lover's orgasmic shouts of "You chicken gristle eatin' motherf**ker!"-- and made them glow so that, in between head-nods to sick beats, anyone could see his stories. And for me, never having killed a man, never having had sex good enough to require that kind of name calling, it was the little things Biggie shared that invested me in the lives lived in his rhymes. "Born sinner, the opposite of a winner, remember when I used to eat sardines for dinner," he rapped in his breakout hit "Juicy." The scenes and characters he crafted were vivid and real.

But when I heard him rap about cookies in "Sky's the Limit," Biggie Smalls became to me something truly greater than a just a wit and storyteller:

Here comes respect:
His crew's your crew, or they might be next
'Look at they man eye! BIG, man, they'll never try.'
So we rolled with 'em, stole with 'em.
I mean loyalty: n**gaz bought me milks at lunch.
The milks was chocolate; the cookies, buttercrunch.

He was bragging about being harder than you, tougher than you, even when he was a child in school. But he was still a child. He loved his chocolate milk. He remembers the flavor of his favorite cookies. The Notorious B.I.G., this spinner of murder rhymes and playboy fantasies, made himself vulnerable. "Sky's the Limit" is a song about how far he'd come from the street life, but it's also a song about the innocence he lost even when he was trying hard to never be innocent at all. Under all his bluster, under the killer braggadocio of "Hunt me or be hunted: I got three hundred fifty seven ways to simmer, sauté" ("Unbelievable"), he still had his throat exposed to the world. Usually you couldn't tell because he was rapping, straight-spittin', but sometimes, you could see underneath and it was fleshy and soft.

There's much more in that song -- stories of how he sewed fake Izod logos onto his shirts to seem richer than he was -- but it was the cookies, buttercrunch, that made me understand food's potency as a symbol, its ability to bridge enormous gaps between him, his characters, and the listener, whether that listener hustled on his corner or was a Chinese kid from the suburbs. Everyone can imagine the horror of hunger, the anger it can engender. Everyone, no matter how hardened, can remember the foods that defined their childhood. And everyone knows, whether you are eating sardines or lobster, that what you eat and what you want to eat says much about you.

For years, I tried to listen to other tapes in my little suburban family sedan, but I would just keep going back to the Black Rhinoceros of Rap, listening to him drop unexpectedly like bird shit. He died 13 years ago today. He was 24. I knew then I would never get to see him grow as an artist, and only years later would I realize how I'd learn from him. I just kept playing him in my car, and I let my tape rock until my tape popped.

Biggie was a funny man, and he mastered the silliness of sex and food. Back to "Juicy":

The Moet and Alizé keep me pissy
Girls used to diss me
Now they write letters 'cause they miss me
I never thought it could happen, this rappin' stuff
I was too used to packin' gats and stuff
Now honies play me close like butter played toast
From the Mississippi down to the East Coast

And he built a legacy in masterpieces of carnal seduction like "Big Poppa":

We can rendezvous at the bar around two.
Plans to leave, throw the keys to Lil' Cease.
Pull the truck up front and roll up the next blunt,
So we can steam on the way to the telly. Go fill my belly –
A T-bone steak, cheese eggs and Welch's grape.
Conversate for a few, 'cause in a few, we gon' do what we came to do.
Ain't that right, Boo? (True.)

I mean, if he can make your girl leave you for that level of romance, what couldn't he do? Outside of sex appeal (when "b**ches used to go, 'Ewww!'") Biggie also rapped often about his fabulous wealth, invoking culinary luxuries, like here, in "Hypnotize":

And just imagine him, all 300-plus pounds, lazy eye and top hat, rollin' through his English gardens, contemplating seafood as he does in "I Love the Dough":

His language was his weapon against the world, and so he bragged with ferocious skill. No detail, no material, ever escaped his eye or its place in his quiver. He was a rapper who didn't have to rely on street slang because his eye for detail in the larger world was so acute. This is from a freestyle with DJ Mister Cee:

All it's taking, is some marijuana and I'm making
MCs break fast, like flapjacks and bacon.

But he was always clear on his relationship with hunger. This is from "Things Done Changed":

If I wasn't in the rap game
I'd probably have a key, knee deep in the crack game
Because the streets is a short stop
Either you're slingin' crack rock or you got a wicked jumpshot
Shit, it's hard being young from the slums
Eatin' five-cent gums not knowin' where your meal's comin' from.