The liberal case against Dennis Kucinich

Progressive hero wants to kill healthcare reform. Is it finally time to give up on him? 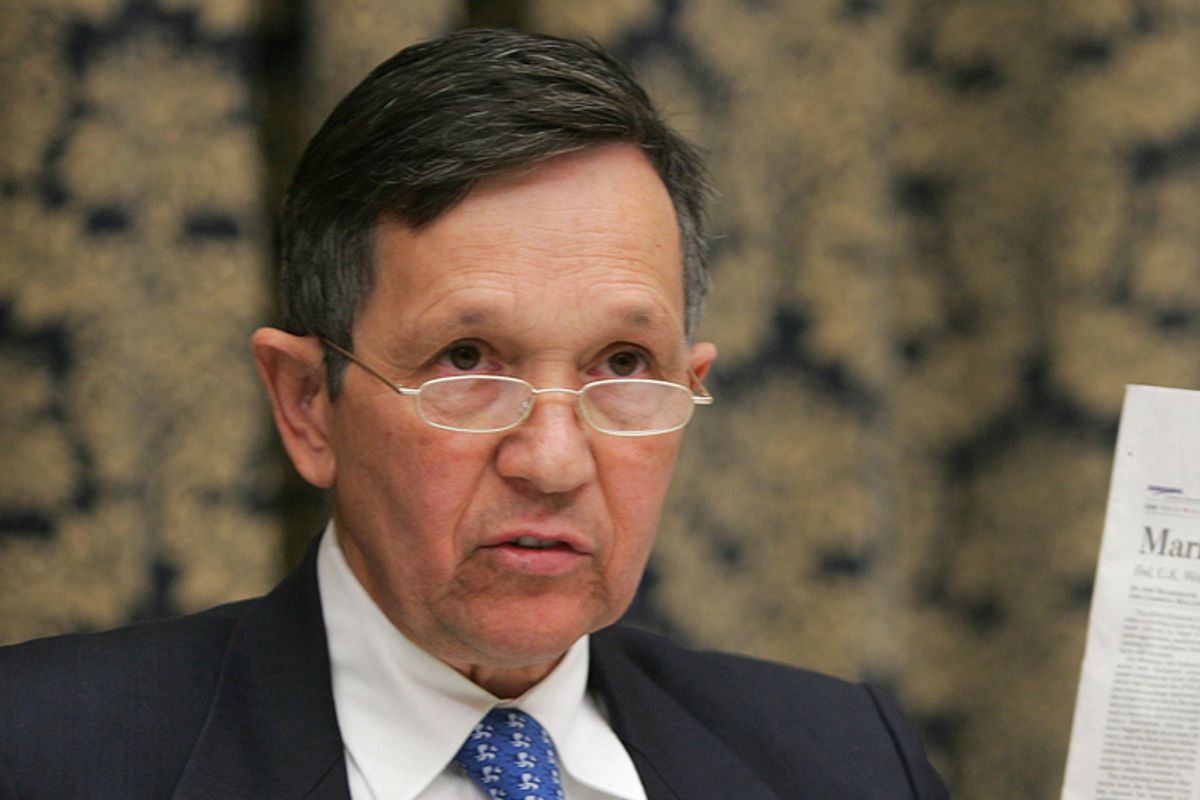 The left has been torn over healthcare reform this year. Some liberals argue that Democrats' current proposals are a major step forward and worth passing despite their flaws, while others argue that the bill should be scrapped because the flaws outweigh the good, and because of the lack of progressive favorites like a public option.

"And I'm going to hold people, like Dennis Kucinich, responsible for the 40,000 Americans that die each year from a lack of health care. And I don't care if you're a Republican or you're a conservative Democrat or you're somebody like Dennis Kucinich. The fact is, this does a heck of a lot for a lot of people ... It's not the ideal solution. But we have our foot in the door, and if somebody like Kucinich wants to block that, I find that completely reprehensible."

Later, pressed by O'Donnell, Moulitsas said he'd support the idea of a primary challenge against Kucinich if the congressman continues his opposition to the legislation.

As Firedoglake's David Dayen pointed out, it's actually too late for someone to decide to challenge Kucinich in a primary this year. But all this -- and some back-and-forth Moulitsas engaged in on Twitter after the segment aired -- leads to a larger discussion: What, exactly, has Kucinich accomplished during his seven terms in Congress?

Moulitsas argues that the congressman hasn't accomplished anything at all, and -- though I know I'm going to get slammed for saying this -- I have to agree. Sure, it's good to see a politician standing up for his beliefs and fighting for a point of view that might not otherwise be represented. But there are ways to do that and simultaneously be an effective legislator. Kucinich simply isn't, and he's never really tried hard to be. (You could also argue -- I would -- that the way he goes about things makes him pretty ineffective as a spokesman for his ideals.)

Just look at this section from the biography on his congressional Web site:

Notice that the bio never says whether any of that legislation actually passed. In fact, according to the Web site GovTrack, of the 97 bills Kucinich has sponsored since taking office in 1997, only three have become law. Ninety-three didn't even make it out of committee.

The three that were enacted are, in chronological order from first to last: A bill "to make available to the Ukranian Museum and Archives the USIA television program 'Window on America,'" a bill "to designate the facility of the United States Postal Service located at 14500 Lorain Avenue in Cleveland, Ohio as the 'John P. Gallagher Post Office Building" and a bill "proclaiming Casimir Pulaski to be an honorary citizen of the United States posthumously."