Where whale is on the menu

A sting exposes a restaurant's dirty sushi secret. But in some places, the marine giants are just a piece of meat 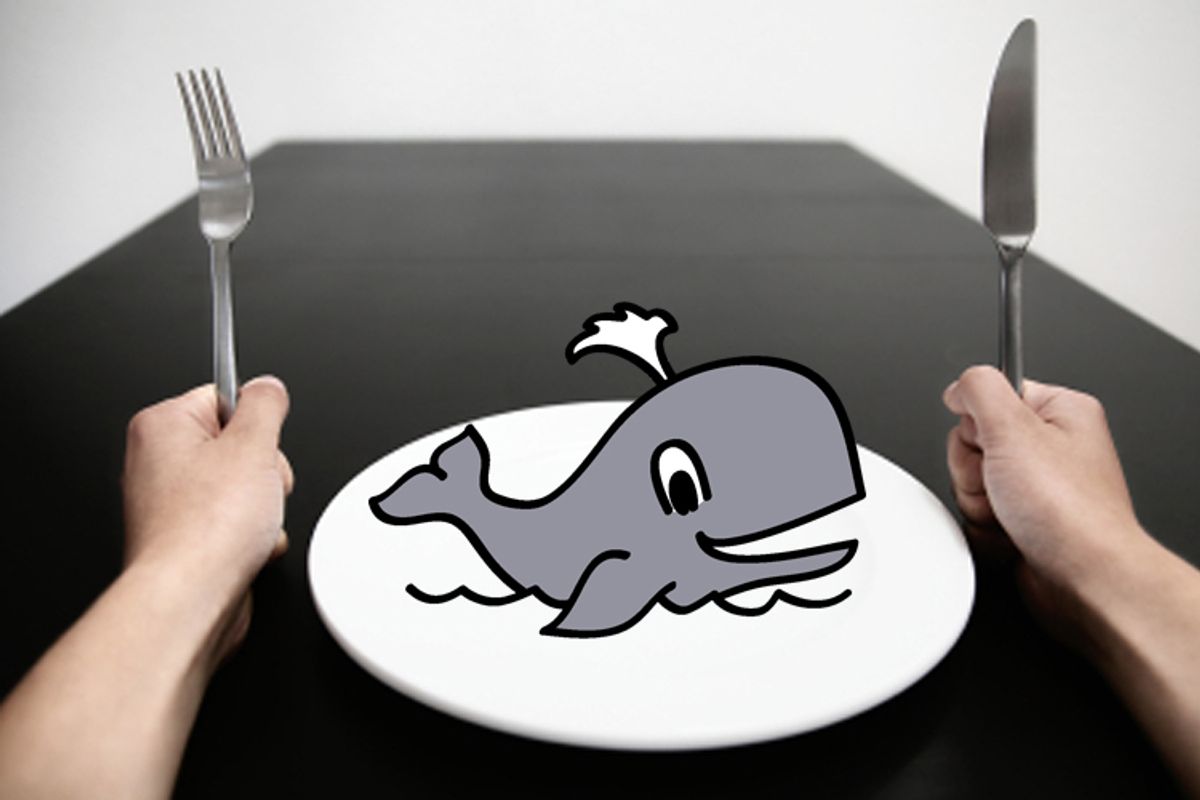 The producers of "The Cove" -- the Oscar-winning documentary about Japanese dolphin killings -- unveiled their latest marine-mammal sting operation yesterday, exposing a trendy Los Angeles sushi restaurant called The Hump for selling illegal whale meat. As part of the operation, two undercover operatives entered the restaurant fitted with  cameras, ordered "whale" (supposedly being stored in a Mercedes in the parking lot) for their astonishingly expensive $600 meal, and slipped it into their bags. DNA testing revealed it to be Sei whale, an endangered species that lives in the North Pacific. (The possession and sale of whale meat in the United States is illegal under the Marine Mammal Protection Act, and punishable by up to a year in prison, and a fine of $20,000.)

But, as shocking as this discovery sounds, in some parts of the world, whale meat is far from exotic.

Whale meat has been a Japanese food for thousands of years, but since the international 1986 whaling moratorium went into effect (a reaction to overwhaling), the meat has lost its appeal among many Japanese, especially the young. In the last decade, Japanese pro-whaling groups, sponsored by the government and fueled by the desire to create a homegrown market for whale meat and thus help overturn the  whaling ban, have staged presentations and tastings at schools around the country in an effort to get children accustomed to the meat.

Unlike in the United States, the Japanese still have access to the meat thanks to its "scientific whaling" program, which uses a loophole in the anti-whaling law to allow vessels to catch whales for research purposes. Every year, Japanese vessels catch several hundred whales, conduct scientific tests, and cut them up to sell as meat in Japan. (The controversial scientific whaling program has been the subject of numerous violent confrontations over the years, including most recently the collision between a Japanese vessel and a batmobile-like anti-whaling craft).

Like Japan, Icelandic whale hunting took a huge hit as a result of the international whale ban, but resumed the hunt for minke whales in 2006. (Unlike many other whale species, like blue and humpback, the minke population remains high, and according to the Icelandic government, is  sustainable for hunting.) As with the Japanese, a 2008 Wall Street Journal article found that whale meat is a hard sell to younger Icelanders who aren't used to seeing it on the menu. It is most popular among older Icelanders and tourists (who enjoy buying something evocatively called Moby Dick on a Stick), and some Icelanders believe that whale hunting is out-of-touch with modern Iceland -- one whale-watching entrepreneur compared the whale hunt to British fox-hunting (a pursuit for "proud, rich traditionalists").

In 2008, former Microsoft chief technology officer Nathan Myhrvold blogged about his experience eating Icelandic whale meat for the New York Times. He was "a bit ashamed to say that it is delicious [but] not so delicious that I have become a convert to the cause."

The Lofoten Islands, located 200 miles north of the Arctic Circle, is home to most of Norway's whaling fleet. In the wake of the '80s whaling moratorium, the traditional whaling community struggled to survive, but in recent years has once again begun hunting minke whales with government approval. The town of Lofoten hosts 35 coastal trawlers (the largest of these boats has a quota of 21 whales per year, though most boats are allowed to capture fewer).

Instead of using traditional harpoons, the whalers use explosives to kill the animal quickly (before this innovation, the whales often spent hours dying agonizing deaths, à la Moby Dick). The meat, a historical Norwegian staple, is sold frozen in Norwegian supermarkets. The Guardian's Kevin Toolis sampled the meat, which he described as similar to most mammal meat, with low fat content, but with a taste that's a "poor rival to beef steak." (For whale-themed fashion fans, you can get ahold of a Norwegian whaling T-shirt here.)

Whale fishing is still allowed among numerous groups for whom whale hunting has traditional significance, in places that include Alaska, Canada, Russia, Greenland, Indonesia and the Faroe Islands. (An Alaskan Inupiat whale hunt was documented in awe-inspiring fashion here.) The Washington Makah tribe faced a long legal fight to be allowed to hunt the animals in their traditional dugout canoes (though they replaced traditional hunting implements with the more effective shooting-whales-with-shotguns technique).