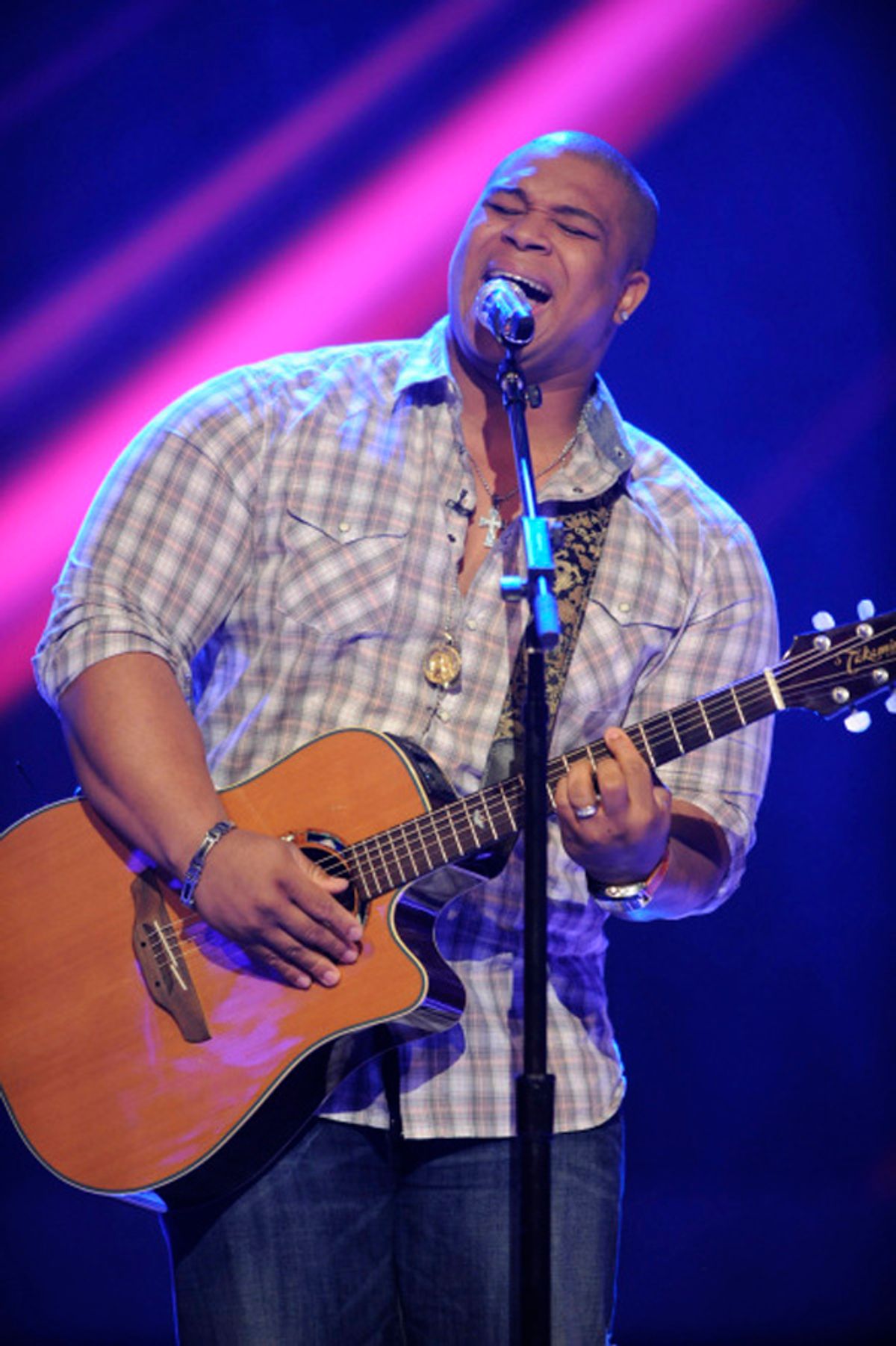 I should warn everyone that I have an open bottle of red wine by my side as I write this week's recap. You can’t really blame me, can you? This season of "American Idol" has been horrible enough to drive anyone to drink – if only to help choke down the disappointment of a thousand pitchy notes tumbling from the trembling mouths of reality show stereotypes. Perhaps it would be more bearable if Paula was still around to drink for us -- or with us -- but we have no vicarious outlet for our pain.  Ellen – who at one time seemed like somebody who could replace Paula’s genuine connection with the contestants – has instead become another head on a heartless panel. Is there any hope when Kara seems to be the only one who even pretends to care?

But it’s my own fault.  I’m the one watching this drivel, waiting for that electrifying moment of discovery when somebody transforms into a star in front of my eyes, when the hair on the back of my neck goes up and I put down the sloshing wine glass, lean forward on the couch and turn up the volume. Until then, I am merely the tragically optimistic Vegas gambler who is slowly starting to realize that the house is kicking his ass.

Lee Dewyze: Why do I feel like with Lee there are three good notes to every two bad ones, and we are supposed to magically forget that the other two happened? I can’t escape his nose, which seems to play a major role in his performances – and not just because he’s sticking it up the judges’ asses after every critiquing session. ("I only listen to the BAD things you guys say, because I’m too self-assuredly humble to even think I’m worthy.") Puh-leaze. Anyway, he'll move on because he’s cute and people have a crush on him, as decreed by Ellen the useless.

Alex Lambert: Oh, trouble. Trouble, trouble, trouble, trouble. Alex has no more been "saved by a woman" than I have, mmmkay? His voice resembles Ray Lamontaigne's, who originally sang the song, but Ray has been sitting on the ledges of buildings for years wondering if he should jump. He knows trouble. Alex knows Disney "does she think I'm cute, even though I’m in Band" trouble. Mr. Ripe Banana has a few addictions to overcome before he can touch that song, let me tell you. But he'll probably stay with us.

Tim Urban: Oh, God. Tim Urban's coming up, and I'm sucking down my second glass of wine, with the TV on pause, hoping my heart can take what happens next. Please don't let him stare at me through the camera like Charles Manson, begging me to love him but looking like he could slit my throat. OK, here goes… there's a guitar and he's singing quite possibly the best song ever written – "Hallelujah" by Leonard Cohen. People who don't know any better are going to think it's the best thing they've ever heard. Ugh, Ellen is running up on stage. The rest are humoring him because they've been big meanies for so long. Tim Urban is going to be with us forever, folks – like Kate Gosselin.

Andrew Garcia: Mr. One Trick Pony is pulling out the trick again - Christina Aguilera's "Genie in a Bottle." I see it! A whole CD dedicated to cute little guitar versions of pop-tart hits!  BRILLIANT!

I just don't see how Andrew can survive another week. I didn't see that damn Paula Abdul thing, but given the way they've been talking about it, they should probably blast it over the loudspeakers in Jerusalem to settle that pesky Arab/Israeli conflict. It apparently was just that good. His talents are clearly wasted here. Shalom, Andrew.

Aaron Kelly: OK, so as I mentioned before I have this "pause" feature on my remote, and it is only 15 seconds into the performance and I've pressed it because I need fortification. The bottle is almost empty, so I don't know what I'm going to do if these boys keep pulling this crap. What crazy Garth Brooks sitting on a stool bullshit is this? Please, Aaron – I have two people left to write about, and I’m losing my will to live. All right, I'm pressing play again.

Well, it wasn't as bad as I thought it was going to be, and that's the only good thing I can say about it. He may be in danger.

Todrick Hall: Todrick is singing Queen’s "Somebody to Love" and boyfriend is hitting the high notes. Queens everywhere will be giving him snaps for that. I liked Todrick back in the day, and this performance gives me hope that he may have the potential to give me a goosebump or two in the future. If nothing else, he at least woke me up a little bit so I could make it through Big Mike's performance. He'll be sticking around for another week.

Michael Lynche: Michael sang "This Woman's Work" – and I think all of the mothers in the country were a little moist in the panties by the time he was done. It brought Kara to tears, and I'm not even going to mention that she wiped her eyes right as the camera cut to her, because that would be cynical. Far be it for me to think she was anything but 10o percent genuinely moved by the performance (cough, still not Paula, cough). I actually thought Michael was great, and in a sea of mediocrity he is standing out as the only contestant who can give Crystal Bowersox a run for her money.

So, wine bottle's empty, and I'm half in the bag, but thanks to some strong performances late in the game, I have retained the will to go on. There are signs of hope popping up like dandelions through cracks in a Walmart parking lot -- an abandoned Walmart parking lot -- in Boise, Idaho -- in late February. But the good lord willing, spring may be just around the corner.

Best of the night: Michael Lynche