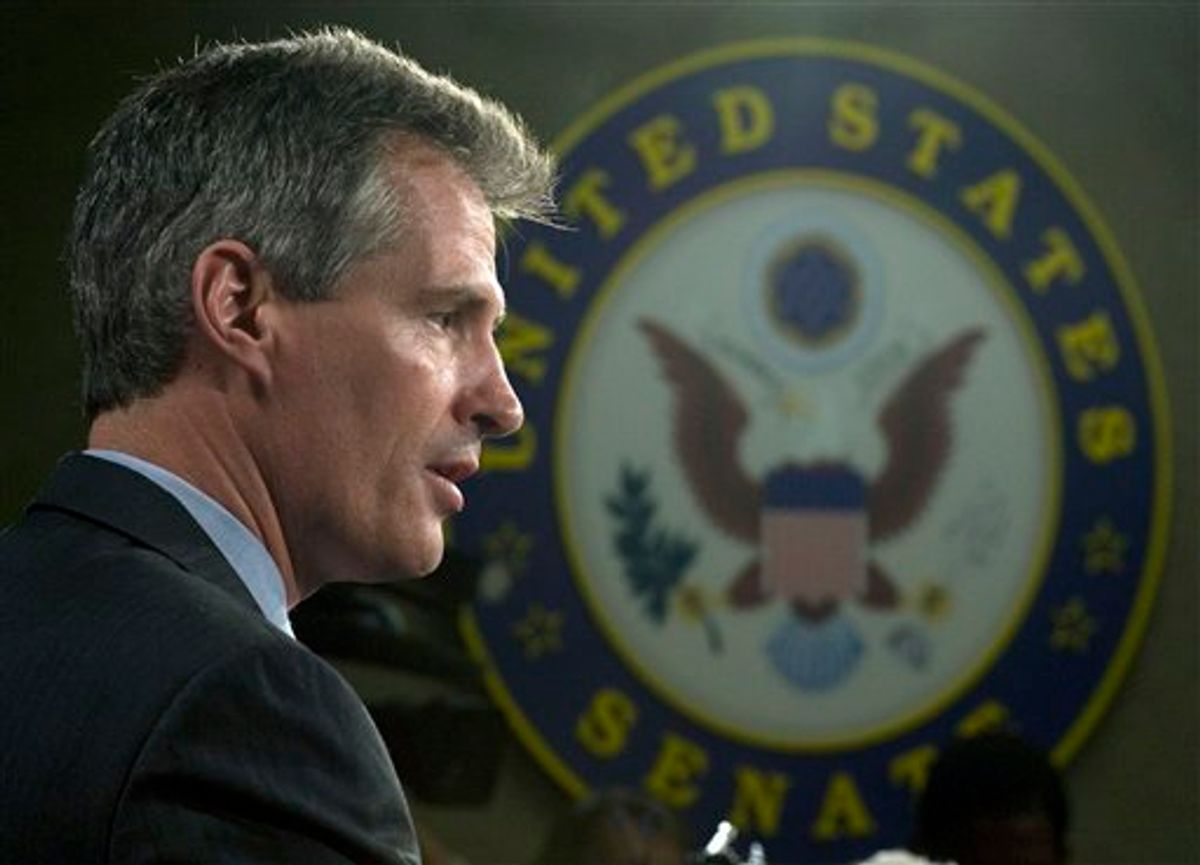 Gawker has a scoop of sorts about Sen. Scott Brown, R-Mass., and it wants to know why no one else got there first. On the face of it, Gawker's Hamilton Nolan, the reporter, has a case, since what he dug up was an old defamation suit against Brown that involves charges of sexual harassment.

In 2000, Brown was sued by Jennifer Firth, who was then serving on the Wrentham, Mass. Board of Selectmen, a position Brown had held earlier. In the suit, Firth said that she'd volunteered on Brown's campaign for the state Senate, and that during her work for him, he'd harassed her. Afterwards, she said, he had defamed her, telling law enforcement and others that she'd sent him anonymous hate mail.

It's strange, Nolan writes, that these allegations never came up during this year's special election, when Brown beat Democrat Martha Coakley to take over Sen. Ted Kennedy's old seat.

"[W]hy did Democrats and members of the national press fail to even bring up the fact that Scott Brown had once been accused of sexual harassment and defamation in the myriad stories about him prior to Massachusetts' special election in January?" Nolan asks in his post.

There's a pretty good reason: As Nolan himself acknowledges, within days of her filing the suit, Firth moved to dismiss it. On top of that, her lawyer moved to withdraw his appearance on her behalf, saying he'd learned that the allegations in the suit weren't supported. That, by itself, should have disqualified the suit from being fodder in the campaign. But there's more, embedded in links Nolan himself provided.

An excerpt from one of those links, a contemporaneous news article about Firth's decision to drop the case:

Firth repeated her contention that she never sent harassing letters or e-mails to Brown, as he has claimed.

She did say that during his campaign for state representative that she sent him notes she intended to be humorous.

"My humor tends to be provocative, and I think Mr. Brown misinterpreted my humor,'" she said in a telephone interview.

Later, she issued a formal statement saying she deeply regrets the misunderstanding. Brown said today there is nothing funny about the harassment he and his family have been subjected to over a two-year period.

"I had a feeling she would try to spin this somehow. I do not find her actions humorous at all. It was a calculated pattern of harassment and inappropriate correspondence, e-mails and letters to me,'" he said.

He said if Firth does not stop bothering him and talking about him he will countersue her.

Firth said she plans to continue serving as a selectwoman unless people start harassing her or spread rumors about her again.

Given Democrats' criticism of the anemic campaign Coakley ran against Brown, there is still bound to be a question of whether the Coakley camp knew about the suit, and if so, why they didn't use it against him.

Let's assume for a moment that the morals of using accusations that seem to be tissue-paper thin at best never entered the equation. (Probably a good assumption; this is politics, after all.) If it did want to use the suit, the Coakley campaign faced two major obstacles. Early on in the race, she was the odds-on favorite, and going this negative against Brown would have looked bad. Later on, when it was clear the Democrat was in real trouble, it was already too late. By then, using something like this, which would be so easily swatted down, would have reeeked of desperation.

Update: The sub-headline of this post initially referred to the suit as being about sexual harassment; it was, as described in the post itself, actually a defamation suit. My apologies for the error.