For the second time, the senator ditches the GOP on bank reform and says Dems will go it alone 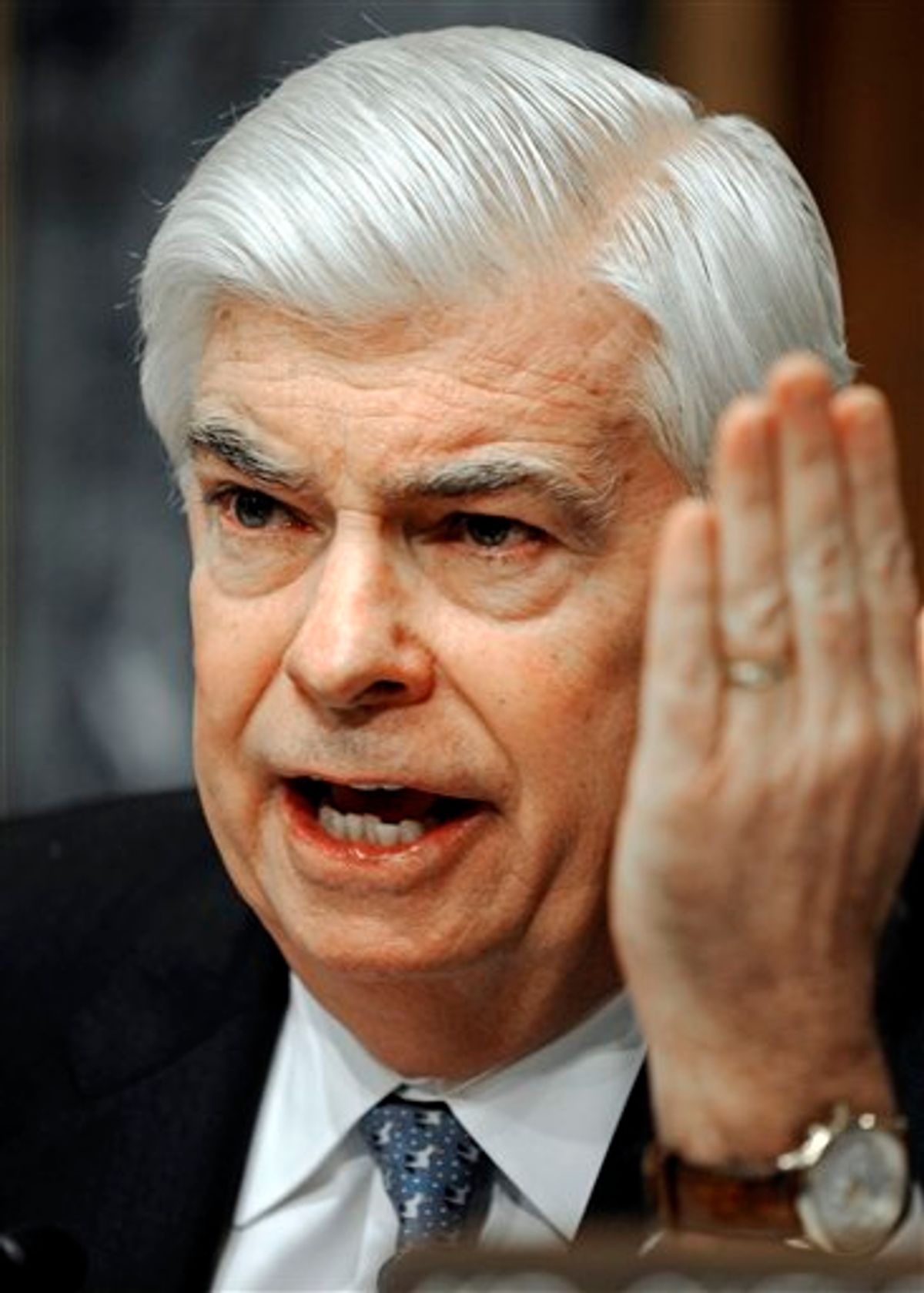 What is Chris Dodd up to? On Thursday, the Democratic chairman of the Senate Banking Committee announced that he will unveil his version of a financial regulatory reform package next Monday, without, reports the New York Times, "yet having a single Republican endorsement."

Negotiations with Tennessee Republican Bob Corker appear to have broken down, possibly over the issue of whether payday lenders should be regulated by a proposed Consumer Financial Protection Agency.

Sound familiar? Just one month ago, Dodd announced that bipartisan talks were at an "impasse" and Democrats would go it alone. Back then, Alabama Republican Sen. Richard Shelby played the role of recalcitrant GOPer. But then, a few days later, word trickled out that Dodd had started negotiating with Corker.

Handicapping the fate of financial regulatory reform at this juncture seems nearly impossible, even for veteran Senate watchers. But there are a few things we know for sure. The bill gets weaker the further it progresses, and it is nowhere near as strong as the bill passed by Barney Frank in the House last December. In fact, according to ace financial regulation analyst Mike Rorty, the evolving Senate bill is beginning to look a lot like a proposed House GOP bill that never made it to the floor.

Corker, reports the Times, said he was "very disappointed" and that Dodd's gambit is likely an attempt to cover his left flank.

"I think what Chairman Dodd is going to do probably is introduce a bill on Monday that is a little to the left of where we were, to try to ensure that he can do as much as he can in the way of getting Democratic support on the committee. And then I think he will move to the right."

Let's try defining "moving to the right": Weakening the Consumer Financial Protection Agency as much as possible, avoiding tough derivatives regulation, and not coming anywhere close to prohibiting banks from the kind of risky bets that precipitated the financial crisis.

The conventional wisdom parrots Corker's position, since the Democrats only control 59 votes in the Senate and thus cannot beat a filibuster. Comparisons with the plight of healthcare reform abound.

But those comparisons are not valid. Whether you blame Republican obfuscation or Democratic compromises with the health industry, the public's attitude toward passing healthcare reform is highly ambivalent. Not so with Wall Street. Senate Democrats have a golden opportunity to put together a solid bill and then force Republicans to filibuster against it, thus placing the GOP in the clear position of defending the interests of the financial industry against the interests of the general public. It would be nice to think that Dodd is finally realizing this. But after watching his zigs and zags over the past few months, during which reform has only become more watered down, it's difficult to feel confident that finally, somehow, the Dems are willing and ready to make a stand.

But let's see what happens Monday.