Strategy: Prey on fear, promise a return to fiscal conservatism, rake in donations, don't follow through 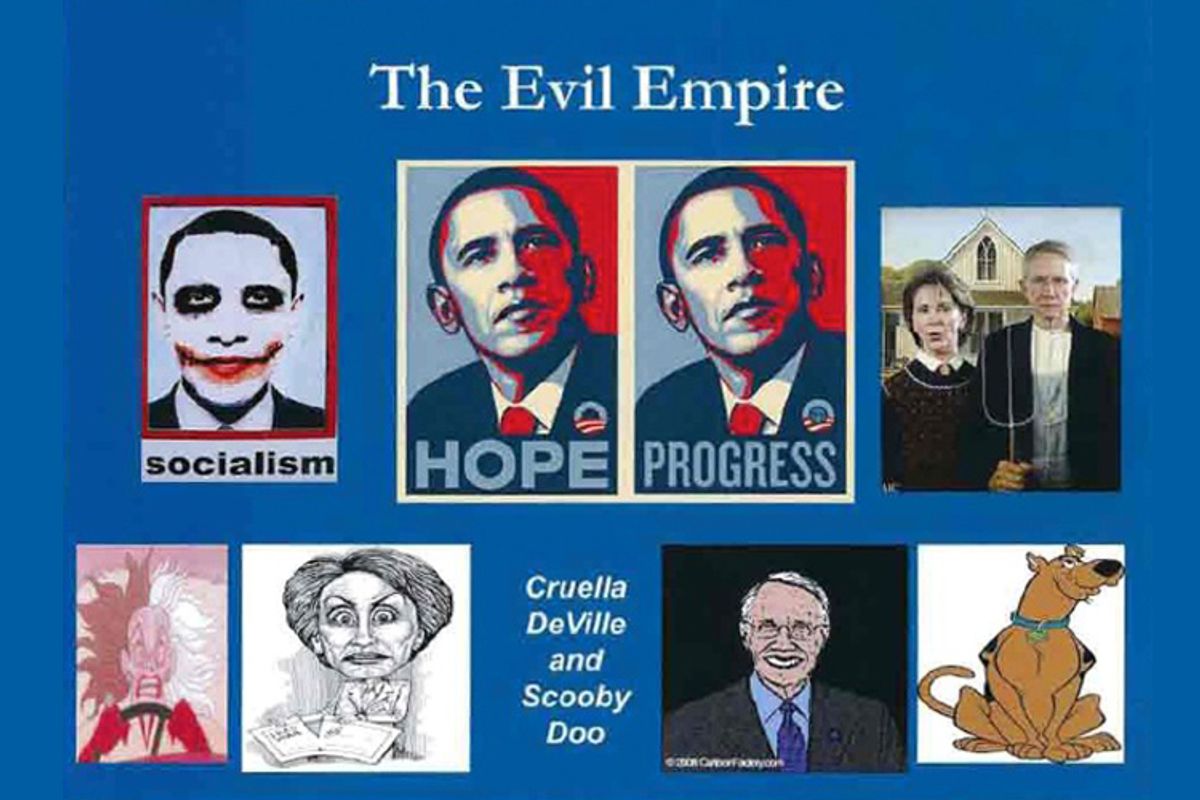 A slide from a PowerPoint presentation given at a Republican retreat in Boca Grande, Fla., last month and obtained by Politico.
--

No one should be shocked by a Republican National Committee fundraising document recently uncovered by Politico. With condescension bordering upon satire, it divides potential GOP donors into two groups: simple-minded dimwits and wealthy egotists.

The key to raising cash from small donors, according to a PowerPoint presentation given by RNC operatives Rob Bickhart and Peter Terpeluk at a retreat in Boca Grande, Fla., is to dazzle them with scare talk about "Socialism," images of President Obama as "the Joker," Nancy Pelosi as "Cruella de Vil" and other bright, shiny objects. The idea is to exploit "visceral" emotions, "fear" and "extreme negative feelings" toward Obama.

Similar tactics have, of course, been used by shameless broadcast evangelists to pry open the piggy banks of elderly shut-ins since the invention of mass media. The antichrist will get you if you don't watch out!

Just imagine the uproar that would have attended the Democratic National Committee's caricaturing President Bush as, say, a Nazi prison guard from "Hogan's Heroes," or as Wile E. Coyote, the incompetent cartoon predator. But when it comes to Obama, anything goes.

Wealthy donors, as the world knows, need their posteriors kissed and their egos stroked. Hence GOP fundraisers ply them with access to party bigshots and tchotchkes ranging from "luxury retreats in California wine country to tickets to a professional fight in Las Vegas." And who could resist rubbing elbows with Newt Gingrich or Weekly Standard editor Bill Kristol at a Napa Valley wine tasting? Kind of an Ayn Rand meets "Sideways" thing.

"Tchotchkes" is New York Yiddish for promotional freebies handed out at trade shows like the Oscars or the Republican National Convention. The idea is to flatter wealthy donors and make them feel important. It's the way of the world.

But what's so unusual about the document accidentally left behind in the hotel hosting the RNC's $2,500-per-person event, explains reporter Ben Smith, is the "air of disdain for the party's donors that is usually confined to the barroom conversations of political operatives." Indeed, the thing makes high-ranking RNC operatives -- Terpeluk was Bush's ambassador to Luxembourg, the cushiest of sinecures -- sound like carnies setting up sideshow exhibits at a backwoods county fair. What will open the yokels' wallets, the two-headed rattlesnake or the hoochie-coochie show?

No sooner did the document become public than Republicans took flight in all directions. Party Chairman Michael Steele's spokesman said he hadn't attended the conference, "disagrees with the language and finds the use of such imagery to be unacceptable. It will not be used by the Republican National Committee -- in any capacity -- in the future."

Senate Minority Leader Mitch McConnell said, "I can't imagine why anybody would have thought that was helpful. Typically, the way parties raise money is because people believe in the causes they advocate. I think the way we raise money from donors across America is to stand for things that are important for the country."

Ah, but there's the rub. What's telling about the RNC sales pitch isn't so much its borderline offensiveness and condescending tone. It's a classic bait and switch, revealing its authors' bad faith. The people who put the thing together not only don't believe in the causes they advocate; they have no intention of delivering on their implied promises should they return to power.

Socialism? When it comes to economics, today's GOP has nothing to advocate except the very policies that got us into this mess to begin with. They're simply trying to trick tea party activists into believing that this time, Republicans will deliver the fiscal conservatism they always advocate but haven't delivered since Herbert Hoover.

The simple truth is, they can't. The reasons, moreover, aren't far to seek. For all the anxiety President Obama's election has generated among those who perceive that people like them are losing power, everyone knows the America of the "Andy Griffith Show" and "Leave It to Beaver" isn't coming back. (Actually, it never existed, but that's a different column.)

Meanwhile, more than 90 percent of the budget deficits tea party activists rail about were created on President Bush's watch. When it comes to spending, surveys show that fewer than 25 percent of self-identified conservatives support cuts in government programs supporting science, protecting the environment, building highways, helping the poor, etc. When it comes to big-budget drivers such as defense, Social Security, Medicare and Medicaid, forget about it.

GOP politicians say government can't create jobs, but that's theology, not economics. They all want federal projects in their districts.

Hence the RNC's bait-and-switch campaign. It's all they've got.

Except for this: Sen. Jon Kyl of Arizona recently argued that unemployment-insurance benefits prevent people from job-hunting "because people are being paid even though they're not working." Former GOP House Speaker Tom DeLay echoed him on CNN over the weekend. Just keep talking, boys. You're coming through loud and clear.