What kind of a woman uses a funnel to go to the bathroom? I do, and it changed my life 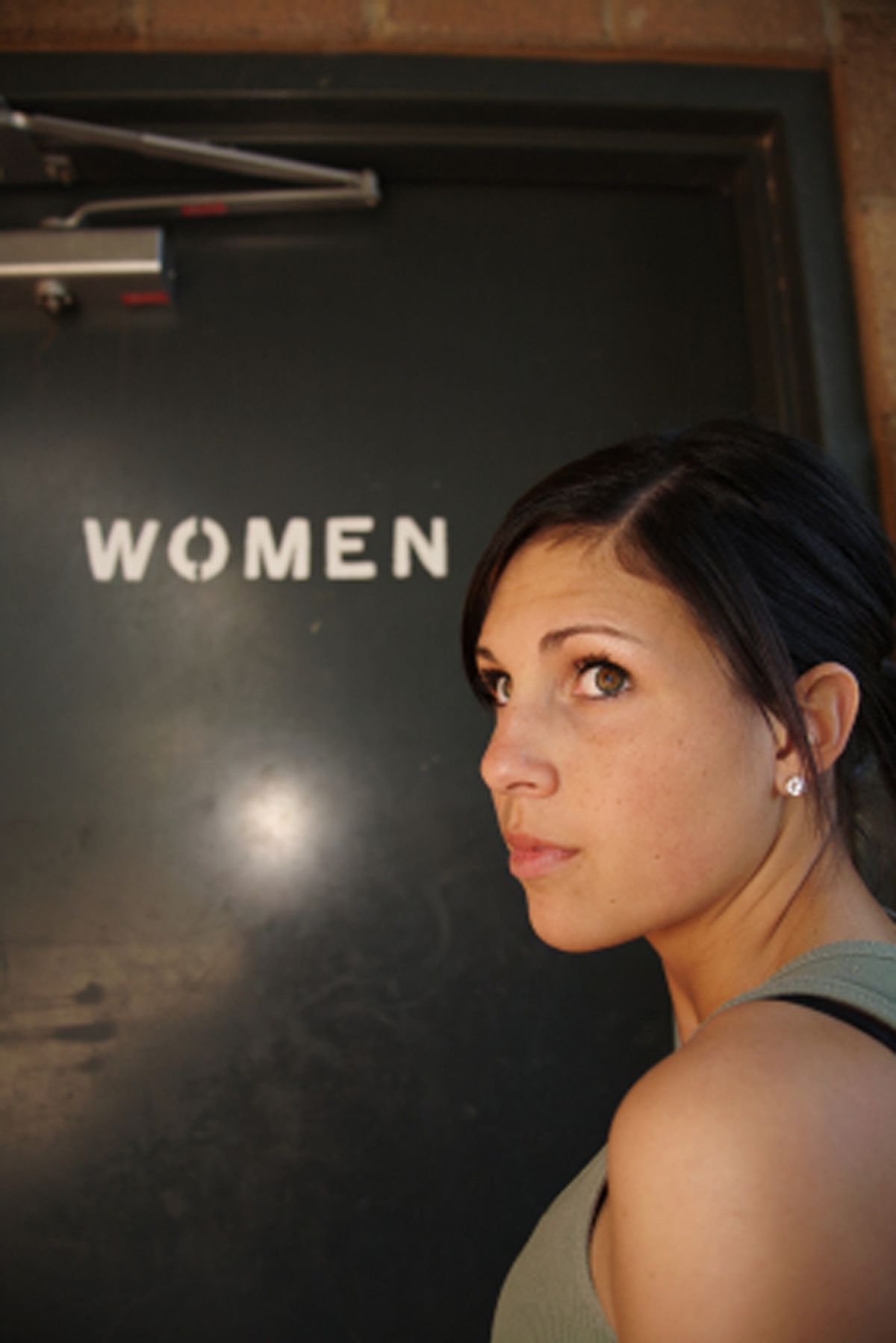 A couple of years ago while clicking around the Web site of a well-known travel retailer, I discovered a miracle product that has changed my life and caused some to question my commitment to my gender: The Urinelle

"urination funnel for women" -- or, as I affectionately refer to them, "pee cones."

As a frequent traveler, I'm no stranger to creative merchandise promising to make my trip more comfortable, but this item was downright mesmerizing. Allow me to quote directly from the ad copy: "Urinelle makes it easy to answer nature's call. Women can now stand, with minimal undressing, at hole-in-the-floor 'squat' toilets around the world (or too-dirty-to-sit Western toilets)." The fact that I've never actually had to face a "squat" toilet did not dampen my enthusiasm.

This brilliant invention, obviously thought up by a female genius who hates public toilets as much as I do, is basically a piece of surprisingly thin paper rolled up like an ice cream cone. The cones lie flat until you are ready to use them; a mere squeeze opens them up to their full potential.

The ad copy goes on to tout how the product is "handy, safe for optimal hygiene, easy to use, and discreet." (Isn't pretty much everything you do alone in a bathroom stall discreet?) Apparently "women in 18 countries on six continents" are wild about them. One of these women gives a glowing review: "I just came back from a 26-day trip to China. These were INVALUABLE!! Do not travel to a developing country without them." And if that weren't enough, they are biodegradable! How could I have been so late to this party?

Then there are the WhizBiz and the GoGirl, both reusable silicone (pink, of course). These seem promising at first glance, but I don't want a long-term relationship with a urination device. If you're not near water, you’re stuck carrying around a urine-soaked object. If you lose it, you’re screwed, because it’s not like every two-bit drugstore the world over stocks these things near the register for impulse buys. None of these issues plague the Urinelle, which allows one to simply cone and toss.

I became so enthralled with my discovery that I e-mailed the link to several female co-workers. My colleagues were used to receiving all manner of strange e-mails from me, but this was different. The responses came in two general categories: those who were scandalized by such a gender transgression, acting as if I were considering a sex change ("You'd actually use these? Freak."), and the practical gals who couldn't believe something so simple could actually work. ("If they are just paper, won't you piss all over yourself?")

I am not a scientist. I have absolutely no clue how a mere paper product can handle a full stream of lady pee and maintain its integrity, and I don't care. I would refer skeptics to paper towel commercials depicting a towel completely soaked, yet still able to hold various objects. If we can put a man on the moon, we surely can allow women to pee standing up. All I know is these babies work, and I love them. They are the best thing to happen to vaginas since beltless pads.

My love affair with the pee cones began on a trip to Spain. The test run was in the airplane bathroom – a place I liken to a dentist’s chair. I don’t need to elaborate on the hell that is an airplane john: There are rarely any seat protectors available, and the idea of sitting on that toilet, even with a foot-thick swath of toilet paper between you and the gruesomely spattered seat, carries a high skeeve factor. Does anyone even clean these things? I suspect that, like pillows, the airplane toilet seat is allowed to accumulate all manner of DNA unchecked.

Some women opt for hovering. A friend of mine with thighs of steel has mastered this technique but, alas, I don't trust my weak legs to keep from quivering until I've finished my business, and the cramped bathroom offered nothing to steady my pose. Call me old-fashioned, I like to avoid wetting myself like a 2-year-old. Besides, even the best squatters must acknowledge that avoiding spillage is largely out of their control on a plane that could experience sudden turbulence mid-stream. I defy even a triathlete to maintain a dry hover in that situation.

With the cones, all these concerns became blissfully irrelevant. Turbulence? Bring it on. Squatting? Amateur hour. With my trusty pseudo (and flushable, no less!) penis, I became master of that airplane bathroom domain. I stood bravely, feet solidly on the ground, facing the toilet bowl, and unzipped. To my surprise, I found didn't have to drop trou very low to use the cones. I had only to get my pants just below where the stream originates, and I was good to go. Still standing, I then positioned the cone tight against my, ahem, lady place, and let loose. What ensued was mind-blowing.

A tidy stream flowed up and away (far away) from me out the end of the cone while I just stood there holding it like a dude holds his joint. I marveled at how I and everything else in the bathroom stayed dry, and then simply tossed the cone in the trash (not trusting the toilet's ability to handle it). I smiled, wondering if someone would see the cone and be befuddled at its purpose. This was a personal best for me in terms of speed. I was the Michael Phelps of public restroom pissing.

In that moment, a whole new world opened up to me. I was giddy with the possibilities -- the time I'd save not having to wrestle my pants, or, god forbid, stockings, down to my ankles, and not insulating the seat with a weather-stripping thickness of one-ply. I'd be in and out of stalls like a shot. I finally understood firsthand why guys are so fast in there. I even briefly pondered writing my name in snow.

I came close to doing just that on a trip to Greece, except that it was sand. A friend and I found ourselves on a deserted beach in Santorini. Being late October, the water was frigid. I realized this after walking barefoot in the edge and noting a few minutes later that I couldn't feel my toes. The only other person on said beach was a woman who looked to be in her late 60s. She had taken her time stripping nude for a leisurely swim. Meanwhile I had to pee like a lush after her fifth beer.

There were no bathrooms, and full-body frostbite was not an option. So, I did what any creative thinker with a spare pee cone in her bag would do. I walked up to a cliff and christened it. I had become so adept at cone-ing that I barely had to lower my pants, and any butt cleavage was easily covered by my jacket. You'd have had to be standing right next to me to realize what I was doing. Given her recent display, miss nude granny was in no position to judge should she catch on. (By the way, yes, I had a spare tissue, and I don't advise cone usage without one. I have yet to master men’s shake method.)

I am not ashamed to say that experiencing the freedom of a squatless outdoor pee was pure heaven. I'm not advocating this as standard practice; mine was an emergency situation, and I was basically alone. Please use your own discretion regarding public pee-coning. But, given my past wilderness-pee options (finding a bush least likely to inflict injury and squatting behind it, hoping like hell to avoid poison ivy, small mammals and falling over), it was amazing how easy this was.

I should warn that these little dynamos can become addictive. In fact, the only two things preventing me from using them all the time, including at home, are 1) the high price ($8.85 for a pack of seven) and 2) the time suck of creating my own. See, I didn't like the idea of spending more than $1 apiece for my cone fix, so I traced several on thick construction paper, cut out the pattern (using a four-sheet thickness of paper just to be safe) and then folded them into shape, taping them closed. My version is far more colorful and works just as well. At this point, I wouldn't dream of traveling sans cones.

And it’s no longer just about the awkward negotiations of a toilet seat. I just never realized how truly awesome peeing like a guy could be. Great, yet another thing to envy men for, along with getting more money for the same work, the ability to have kids at any age, and the whole lack of periods deal. But I have to say: When I use the cones I feel like I am transgressing in some way, breaking rules, entering a club I'm not supposed to belong to -- and it feels awesome.

Don’t get me wrong: I certainly don't want to be a dude (most of the time); I just enjoy going to the bathroom like one. I’m not trying to subvert nature. I get that the sexes are built differently, which is a good thing. That’s part of what makes humans the wondrous creatures we are. But being female can be a huge pain in the public urination department. This lovely little piece of paper somehow takes the sting out of taking a squirt, so to speak. (Note, if whizzing actually stings, see your doctor.)

Michelle has 15 years of experience as a public relations writer and journalist, having penned everything from celebrity speeches about OCD to Web copy about a singing gynecologist. She's also worked as a reporter for Reuters Health and a copy editor for Time Out New York. She has written for Psychology Today, eDiets, Modernmom, CornerbarPR, PR Week, O'Dwyer's and Communique. In the last five years she has traveled to 15 countries, pee-coning it for the past two years with 100 percent lack of spillage to date.