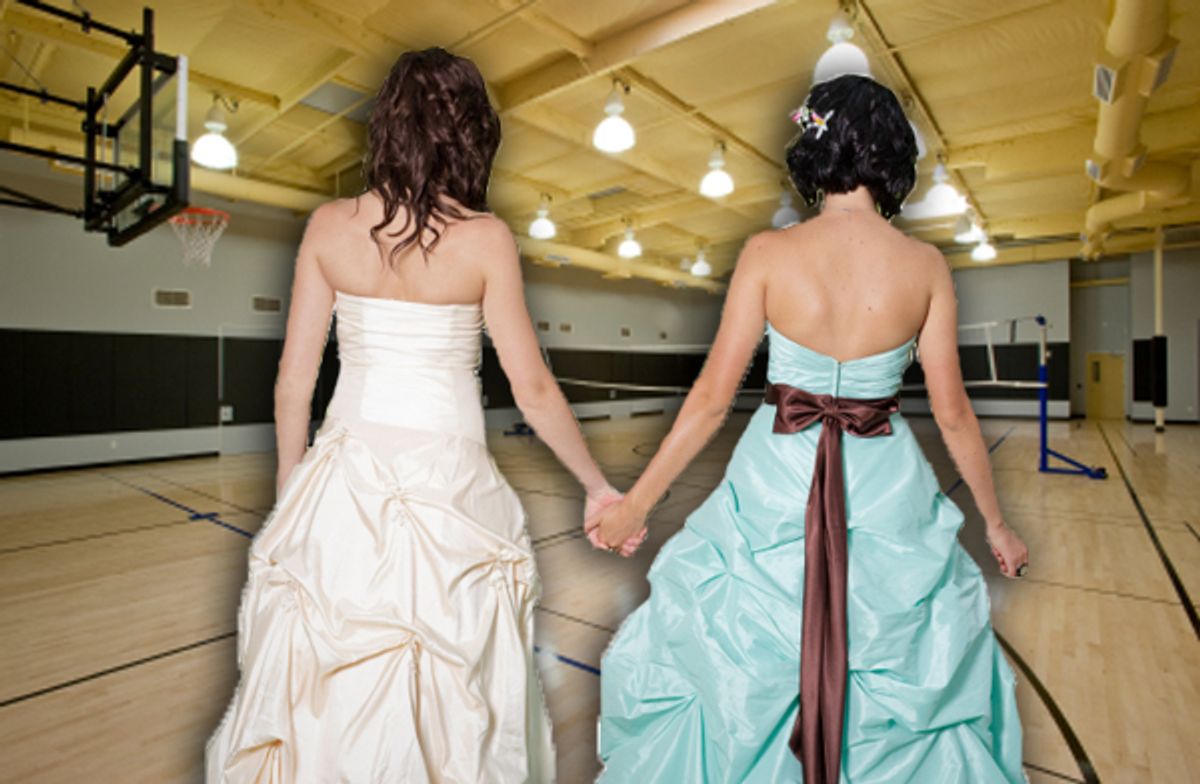 It seems homophobic institutions are trying out a new strategy for dealing with the pressure to treat gay people like full human beings: If they can't legally discriminate, they'll punish everyone. First, the Catholic Archdiocese of Washington decided to stop offering all spouses of employees health coverage, since some of those spouses could now be the same gender as their partners. And now, a Mississippi school board has decided to cancel the prom at Itawamba Agricultural High School, rather than allow 18-year-old senior Constance McMillen to attend with her girlfriend. One more and it'll be a trend!

The school board tried simply refusing to let McMillen attend the dance with a female date -- oh, and telling her, just as another Mississippi school told Ceara Sturgis at picture time last year, that she couldn't wear a tux -- but as with the Sturgis case, the ACLU got involved. And I think we all know how those people can be about demanding that institutions abide by the law and respect people's civil rights. So, rather than welcome lesbian students to their own prom, the board did the only logical thing: Called the whole thing off and suggested that a private company, which would be free to legally discriminate against gay teenagers, host an alternative dance. And they say conservatives can't think outside the box!

I snark, but this decision -- in addition to being patently cruel on its face -- has already had more serious repercussions for McMillen than just missing a dance. She told the Clarion-Ledger that when she first heard prom was canceled, her response was, "Oh, my God. That's really messed up because the message they are sending is that if they have to let gay people go to prom that they are not going to have one. A bunch of kids at school are really going to hate me for this, so in a way it's really retaliation." And unfortunately, she called it. Back at school today for the first time since it hit the news, she's been greeted with dirty looks and one fellow student sniping, "Thanks for ruining my senior year."

That's what makes this even worse than a dozen other outrageous stories about LGBT kids being banned from school dances: The members of the school board aren't just expressing their own prejudice, they're fomenting anger and resentment among her peers, shifting the focus from their thwarted attempt at illegal discrimination over to the one stubborn kid who's ruining it for everyone. Never mind that it's their own petulant, hateful decision that sabotaged the planned prom; they surely know they can count on a certain number of kids to blame McMillen for standing up for herself, and make her miserable for it. They know damn well they've created a recipe for harassment, potentially even for threats to the girl's safety. (And how much you want to bet they're doing it in the name of Jesus?)

The student who claims McMillen has ruined her whole senior year highlights just how large the idea of prom looms in the minds of many teenagers. A few years down the line, they might think themselves silly for putting so much emphasis on one dance, but then, look at how many stories about students being barred from proms -- because of their sexuality, their race, their choice of clothing -- make national news every spring; it's a big deal to adults, too apparently. Something about seeing the culture wars in microcosm, set against a backdrop of heightened adolescent emotion, is fascinating -- yet at the same time, easy to forget five minutes after you read it, because come on, it's just a school dance. But this time, it's not only about one or two kids being left out -- bad enough, every time it happens -- but about a school board defending its right to discriminate so fiercely it will deny a rite of passage to all the graduating students, and blame it on the one who stood up for her own civil rights and dignity. It's about an institution doing an end run around the law to preserve its own bigotry, just as the Archdiocese of Washington has done. And the scary thing is, it really could become a trend.