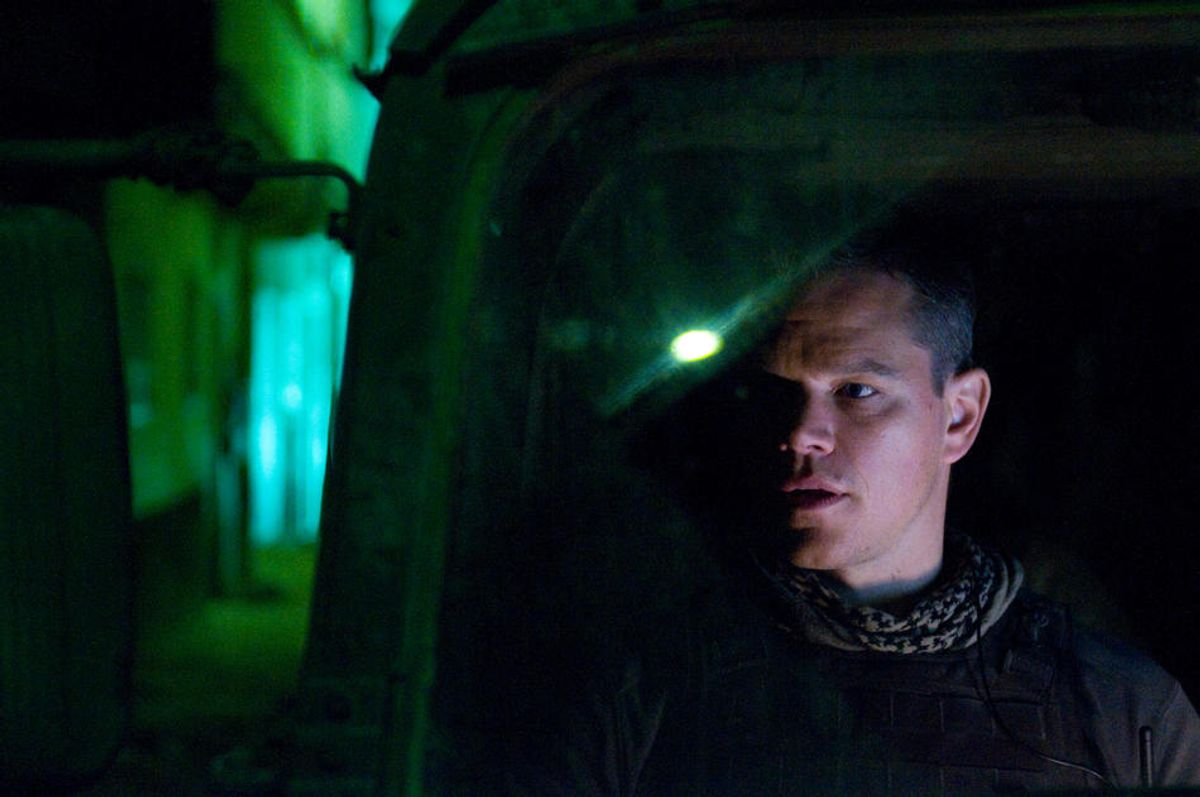 Early in "Green Zone," a fictional movie teased from the tangle of facts, almost-facts and squelched facts surrounding the search for weapons of mass destruction in the early days of the Iraq war, Matt Damon, as a soldier in charge of finding those WMD, has one line of dialogue that sums up the heartsickening reality of the whole enterprise. During a briefing in which a couple of higher-ups announce with bravado that someone they completely trust has told them exactly where the WMD are located, Damon's Chief Warrant Officer Roy Miller speaks up with the demeanor of a polite schoolboy: "There's a problem with the intelligence, sir." Damon and his team have already checked out many of the sites at which those WMD were supposedly stashed and come up with zilch. (One of the alleged locations has turned out to be a toilet factory.) He's not being disrespectful; he's merely pointing out a fact.

The thanks he gets amounts to a blank gaze and a muddy restating of the nonfact in question. But Miller won't be lulled into the becalmed state of believing everything he hears: He presses forward, to the point of disobeying orders, trying to uncover a truth that no one around him much cares about, simply because it threatens to disrupt their own ambitions and plans. His dogged earnestness is what gives "Green Zone" its sense of wayward, zigzaggy momentum: This is a movie that recognizes there's no straight line to the truth, which is part of what makes it vaguely unsatisfying -- though it's also what keeps it honest.

"Green Zone" is fiction, a jittery, idealistic thriller adapted -- by screenwriter Brian Helgeland -- from elements of Rajiv Chandrasekaran's 2006 exposé "Imperial Life in the Emerald City." The director is Paul Greengrass, a filmmaker who has divided his time and attention between "serious" pictures (like the extraordinary "Bloody Sunday," about the 1972 Derry massacre, and the beautifully crafted but excruciating "United 93") and intelligent crowd-pleasers (like "The Bourne Supremacy" and "The Bourne Ultimatum") that, whatever their flaws might be, at least feel like movies made for grown-ups. Similarly, "Green Zone" comes off as a picture made by a person with a brain as well as a conscience, though the movie's big flaw may be its unblinking insistence that we've been lied to -- you don't have to read too much between the lines to see how adamant Greengrass is about that fact, though he isn't telling us anything particularly new.

But I think the value of "Green Zone" lies less in what Greengrass is telling us than in the mood of helpless dread he takes so much care in building. Miller is an honest and good soldier, not a loose cannon: He's completely willing to look for those WMD, even though he's also become a bit ground down by the fact that he hasn't been able to find any. His mistrust of a slippery-eel government lackey (played by Greg Kinnear, in yet another one of those slippery-eel roles he was born to play) leads him to get into bed -- not literally, of course -- with a CIA analyst (Brendan Gleeson) who fears that the United States' plan to outlaw Saddam Hussein's Baath party will lead to a bloody civil war. As he searches for what he hopes will be the truth -- that note of uncertainty is intentional, the eternal question mark around which the whole movie revolves -- he presses an Iraqi citizen, Freddy (Khalid Abdalla), into service. Freddy insists he only wants to help his country; the complication is that no one -- least of all the U.S. military -- knows what his country really needs.

Woven into a plot that's often murkier and more convoluted than it needs to be is a journalist (Amy Ryan) who's something of a stand-in for Judith Miller (except for the fact that this one actually has principles). Greengrass' methods of visual storytelling aren't as sharp as usual: He's chosen to tell this story in faux-documentary style, which means he uses lots of "Bourne"-style shaky cam and jitterbug cutting. Greengrass generally takes extreme care to craft clear action sequences, in which it's always possible to tell who's coming from where. But the action in "Green Zone" is sometimes uncharacteristically wayward and confusing. And while Greengrass may have been, up to this point, one of the most skillful users of the hand-held camera, there's nothing particularly interesting or effective about its use in "Green Zone." Keeping the camera stationary would have been a far more surprising and suitable choice.

Still, "Green Zone" shows an emotional rawness that's likely to hit home for anyone who still feels shafted by the U.S. government's ineptitude in Iraq. This is a movie made up of exposed nerve endings; it never capitulates to the idea that it's OK to smooth out the facts. In his forward to the recent paperback edition of Chandrasekaran's book, Greengrass writes, "Sometime in early 2004, I began work on a film set in Iraq. I wanted it to be a thriller -- urgent, contemporary, filled with intrigue: A movie that would hopefully take some of the huge audience that had enjoyed the Bourne series to a real-world setting and encourage them to consider whether the mistrust and paranoia that characterized Bourne's world was so far-fetched after all." And while I find myself repeatedly asking myself if Matt Damon really is all that good an actor, watching him in "Green Zone" reminded me that there's a particular type of guileless, principled guy that he often plays perfectly. In that respect, his Roy Miller is a lot like Jason Bourne, a man who's been trained to be a tool of the system but who insists on thinking for himself -- not to be contrarian but as a way of staying true to some standard of decency he's set for himself. Near the end of "Green Zone," we see Damon's Miller, weighed down by full combat gear, getting ready to leave the luxury room, located in an appropriated palace, where he's temporarily set up operations. Damon, with his all-American honest-lad good looks -- not to mention his sand-colored fatigues and combat boots -- looks out of place amid all that grandeur. And somehow -- even though his face wears the dutiful blank expression of a good soldier -- he also looks disgusted by it.