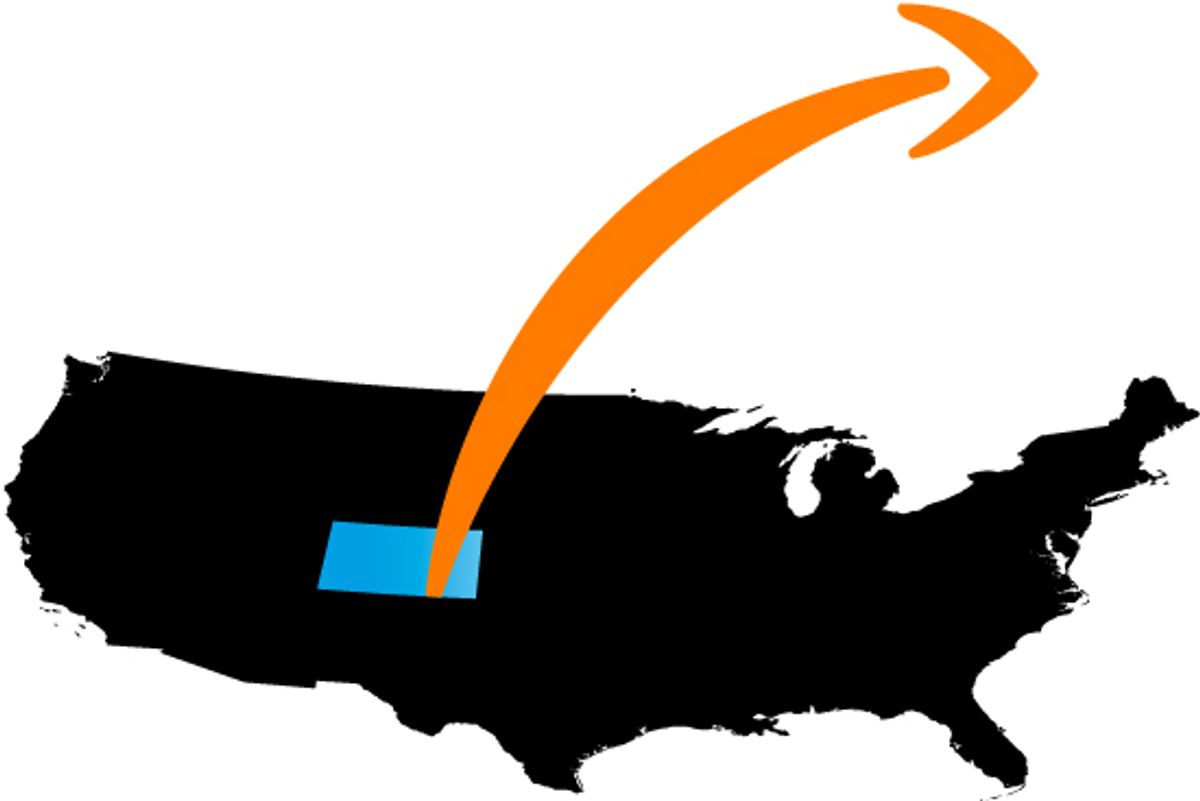 Is the Internet everywhere, or is it nowhere?

This question will strike many readers as a navel-gazing exercise in postmodern existential inquiry, prompting reflections on the 21st-century meaning of location (is an IP address really an address?) and space (is cyberspace actually "space"?). But thanks to Amazon.com, it's become a question about more concrete and imminent issues like budget deficits and tax fairness.

Following a 70 percent earnings increase last quarter, the company this week terminated its business relationships with its Colorado affiliates. The move was a response to new Colorado legislation compelling online retailers to either collect the sales taxes that every other business collects, or at least disclose that customers must pay the levy to the state themselves.

The bill was pragmatic, seeking to raise much-needed revenues as Colorado's infrastructure and schools buckle under a $2 billion budget shortfall. But Amazon, indifferent to such emergencies, reacted with punitive petulance, sending a deliberate message to lawmakers in every other state: Make us play by the same tax rules as other businesses, and your state will be punished, too.

The company, you see, fears that most capitalist of principles: fair competition. It instead relies on a rigged market.

Despite the ubiquity of its Web presence and its affiliates, Amazon says it officially exists in only four states (Kansas, Kentucky, North Dakota and Washington) and that it therefore isn't required to collect local taxes on its transactions in the other 46 states. That has allowed the company to sell goods at seemingly lower prices than local brick-and-mortar competitors, which in turn artificially tilts the market in Amazon's favor.

In recent years, New York, North Carolina, Hawaii and Rhode Island have woken up to the scheme, passing laws that explicitly apply their local taxes to online retailers. Now, with budget crises intensifying, even more states are pondering similar legislation. And so rather than simply accept a level playing field, Amazon opted to make an example out of Colorado as a means of preemptive intimidation.

This is politics at its most bare-knuckled — not surprising, considering it comes from Amazon CEO Jeff Bezos, a caricature of Information Age greed.

In the "Office Space" economy, Amazon is Initech and Bezos is the firm's soullessly saccharine Bill Lumbergh. Like the typical dot-com shark, he shrouds old-fashioned suit-and-cigar ruthlessness in business-casual attire, ear-to-ear grins and Charlie Rose-ready colloquialisms. But beneath the earth tones and triumphalist techno-babble is the same boor who offshored a Seattle call center the moment employees pondered a union.

Punishing one state's economy to scare other states is all in a day's work for this guy — especially because ratio-wise, it could be a brilliant financial decision. Sacrificing some business in Colorado, where the tax was projected to raise $5 million in public revenue, may end up a jackpot investment if the move kills the initiative in places like California, where it could raise $150 million every year.

"If" — it always comes down to "if," doesn't it? And this particular "if" is bigger than even Bezos' corporation.

Amazon, as one California lawmaker says, has "built an entire business model based on tax avoidance." Unfortunately, so have many other firms, as evidenced by America’s $300 billion annual gap between taxes owed and paid. And as more commerce is transacted through tax-avoiding Internet conglomerates, that gap could grow, honest local business could be further disadvantaged, and deficits could explode, forcing ever deeper cuts to public services.

This is the dystopian outcome that multinational corporations and anti-government activists aim for in today's tax wars — and they could make it a reality.