When it comes to shows about parenting, dark comedies capture the madness better than light dramas do 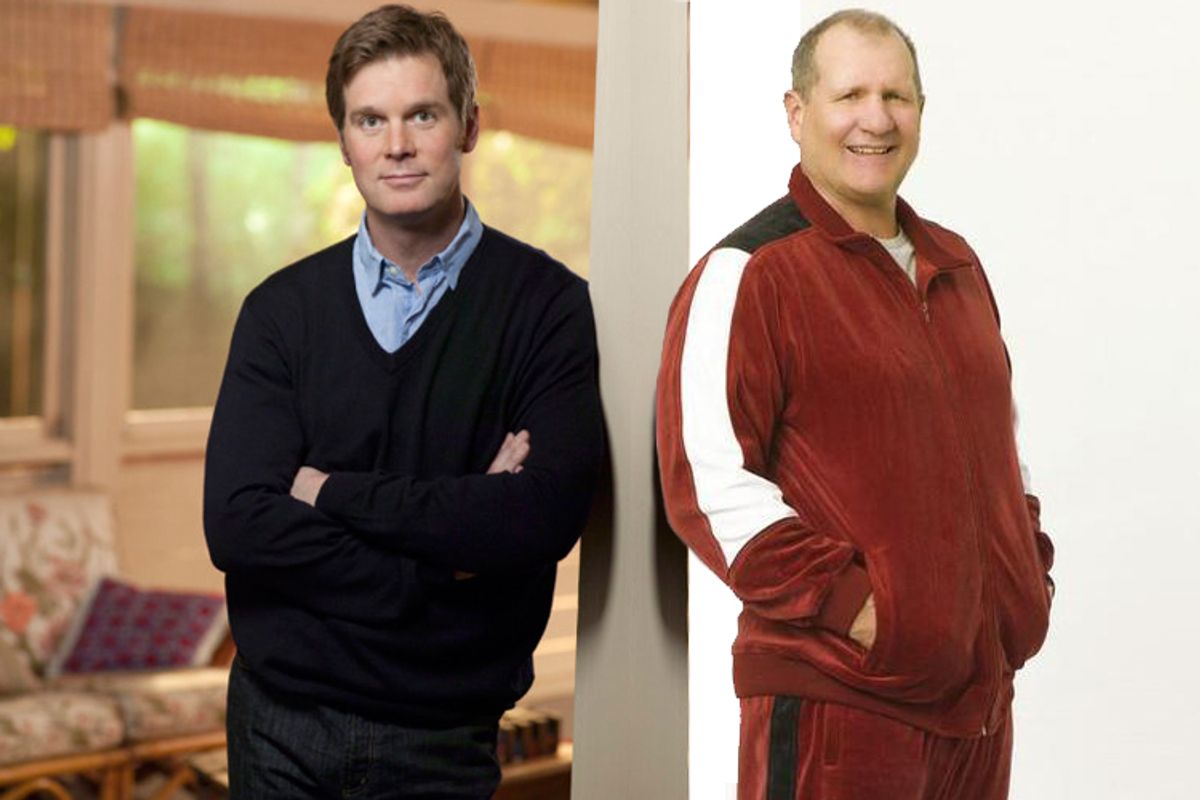 Peter Krause from "Parenthood" and Ed O'Neill from "Modern Family."
--

Parenting will turn you into someone you don't recognize. Instead of carefree but lonely you're suddenly happy but exhausted, fulfilled but overworked. Children can make you feel gloriously alive, shamefully angry, madly in love and terribly vulnerable, all within the course of a few minutes. You are their little puppet, and don't you forget it. You were brought into this world to love them, feed them, read to them and launder their little shirts – over and over and over again -- until you're very, very old.

Few TV dramas have done justice to the pleasures and pains of raising kids. "Six Feet Under" touched on the feeling of being out of touch with and disempowered by your children – first in the form of Ruth Fisher (Frances Conroy), a passive-aggressive controlling mom who struggled sweetly to find some way to connect with her smart, headstrong children, then, in Nate's (Peter Krause) attempts to battle his own avoidance and controlling urges with his daughter. ABC's "Brothers & Sisters" took these challenges and translated them into an idealized world of open, honest conversations ending in hugging, learning big important lessons and impromptu slow-dancing as a family. If this warm, fuzzy wonderland didn't feel like a fantasy to you, then please let me into your family immediately -- once I stop wretching, anyway.

NBC's "Parenthood" (10 p.m. Tuesdays) tries to offer a middle ground between these two extremes, demonstrating the frustrations of parenting, but leavening it with moments of awkward connection, goofiness, relief and joy. Unfortunately, getting this mix just right is never easy. Somehow, when it comes to parenting and family, shows that are outwardly dark ("Six Feet Under," "The Sopranos") or consistently light ("Modern Family," "The Middle") appeal to audiences much more than those that try to mix the two. Just as with real parenting, finding some balance in portrayals of parenting is nearly impossible. More often than not you fall into bleakness and pessimism, then pull yourself out of it with laughter, deep sighs and a strong drink as the sun sets.

Peter Krause is a good start as harried dad Adam Braverman. Krause has a knack for playing the overly intense control freak -- something in the way Adam clenches his jaw and bugs his eyes out in spite of his easygoing surface demeanor speaks volumes about his inability to control his emotional investment in every little aspect of his son Max's (Max Burkholder) behavior. His dad, Zeek (Craig T. Nelson), wears his more aggressive approach on his sleeve, openly coaching Max while Adam struggles to coach Zeek on how to coach Max.

Zeek: You weren't any different. You had to get over your fear, too.

Adam: We're not raising him the way that you raised us, all right?

Adam: It means I don't want him to feel like everything in life is a war.

For a pilot to get straight to this clash between a parent's and a son's perspective over how a kid should be raised is impressive, with or without the smart, funny 1989 movie starring Steve Martin as its precursor. That the scene is handled with just enough contempt mixed with polite restraint is a testament to the director's and producers' hard work in finding the right emotional tone between too harsh and too idealized. (In the original pilot, this scene was a shouting match that came off as far less interesting and revealed less of their relationship.)

Although the dynamics between Zeek and Adam are more nuanced than they were in the original pilot, other aspects of "Parenthood" are kinder and gentler to the point of feeling forced. Where the pilot felt scrappy, slightly harsh and occasionally very dark, the series tries to maintain a lighthearted, wacky mood that doesn't always match the characters and stories involved. Yes, Sarah (Lauren Graham) has two angry teenage kids, a drunk ex and no job. But look how silly and self-deprecating she is at the interview for the job she doesn't get! Yes, Adam and his wife are worried that son Max has Asperger's, but look at kooky Adam, chasing a possum around in his backyard!

Real parents may have little interest in riding this roller coaster in the rare moments that they're allowed to relax, by themselves, without children around. At 10 p.m. on a Tuesday night, after a long day of dealing with your own crazy kids, do you really want to watch a married couple learn that their son has Asperger's? Even if the next scene features Dad's siblings cracking up and sharing a joint, that doesn't help -- in fact, it rings a little false, like those parents who repeat that their kids are a "true blessing" in the breaks between shouting harsh words at them.

The most disconcerting change, for those of us who saw the original pilot of this show last fall, is the replacement of Maura Tierney with Lauren Graham in the role of Sarah. I'd never taken much notice of Tierney before, but she brought a lot of warmth and vulnerability to Sarah, the 38-year-old single mom whose life has been a series of reckless choices and haunting regrets. Graham plays Sarah with much more humor and harried-mom shtick, and though Graham is of course fantastic and has great timing, it's really sad that Tierney's breast cancer robbed her of such a wonderful role. And Tierney vacating this role robs "Parenthood" of a lot of weight. More than any other actor on the show, Tierney had a way of balancing the gravity and levity of parenting in a way that felt organic, rather than manic.

Even as the TV landscape changes by the minute, you have to wonder why a network drama about domestic life can't quite touch the same darkness that it might on a cable or premium cable channel. The networks are obviously afraid of a harsh portrayal of parenting, but what they end up with -- sugarcoated heaviness -- isn't a solution, and it's destined to alienate viewers much more than the shadows and low moments of a show like "Six Feet Under" ever would.

So what does work, as far as network family shows go? Five years ago no one would think the answer would be "sitcoms," so tired and stale was the old formula of goofy dad, nagging mom and adorable, supernaturally clever kids gathered around the couch. But thanks to ABC's "Modern Family" (9 p.m. Wednesdays), somehow, some way, the domestic comedy has been revived from its half-dead state and transformed into a thing of true beauty.

If you aren't watching this show yet, trust me, you should be. From the cool-dad foolishness of Phil Dunphy (Ty Burrell) to the eye-rolling spats between Cam (Eric Stonestreet) and Mitchell (Jesse Tyler Ferguson) to the gruffly lovable weirdness of Jay (Ed O'Neill), this show features wall-to-wall great moments and hilarious lines.

My favorite character of all, though, is weird little gentleman Manny (Rico Rodriguez). Somehow the interplay between the babying of his Colombian hottie mom Gloria (Sofia Vergara) and the tough love of grumpy older dad Jay works in each and every scene. How could you not love writing over-the-top scenes for these three? This week, Jay accidentally kills Manny's turtle, but lies and says that a raccoon jumped in the window and killed it (after making little, muddy stuffed-animal footprints down the wall and across the carpet).

Gloria: You lie. I'm Colombian, I know a fake crime scene when I see one.

Jay: I was hanging up the new poster, and it fell on top of him. It was an accident.

Gloria: You have to tell him.

Jay: No, I've been through this before. When Mitchell was 9, I was supposed to take care of his bird. It got out and flew into a fan. It was like a bloody pillow fight. To this day, Mitchell looks at me, I see him thinking, "That's the guy that killed Fly-za Minnelli."

Jay: How did I not know that kid was gay?

The memorial for Manny's turtle is priceless ("Turtle, reptile, pet, Shel Turtlestein was many things," his homage begins), but then almost every single line of "Modern Family," every story, is pure genius. Why settle for a full hour of lukewarm drama about parenting, when you can savor a funny but still heartfelt half-hour instead?

What "Modern Family" really nails, though, is the way real parents experience the highs of parenting. It's not about chasing possums through the yard or making jokes with your siblings then clinking glasses of red wine. The real moments of sweetness and gratitude come when everything is going to hell around you. Even as the chaos unfolds before your eyes, even as you're flooded by the noise and the conflict and the little battles and the mess, the soundtrack changes for a minute. You take in the madness from a distance and think: This is what it's all about.

Then someone throws up on your pants.