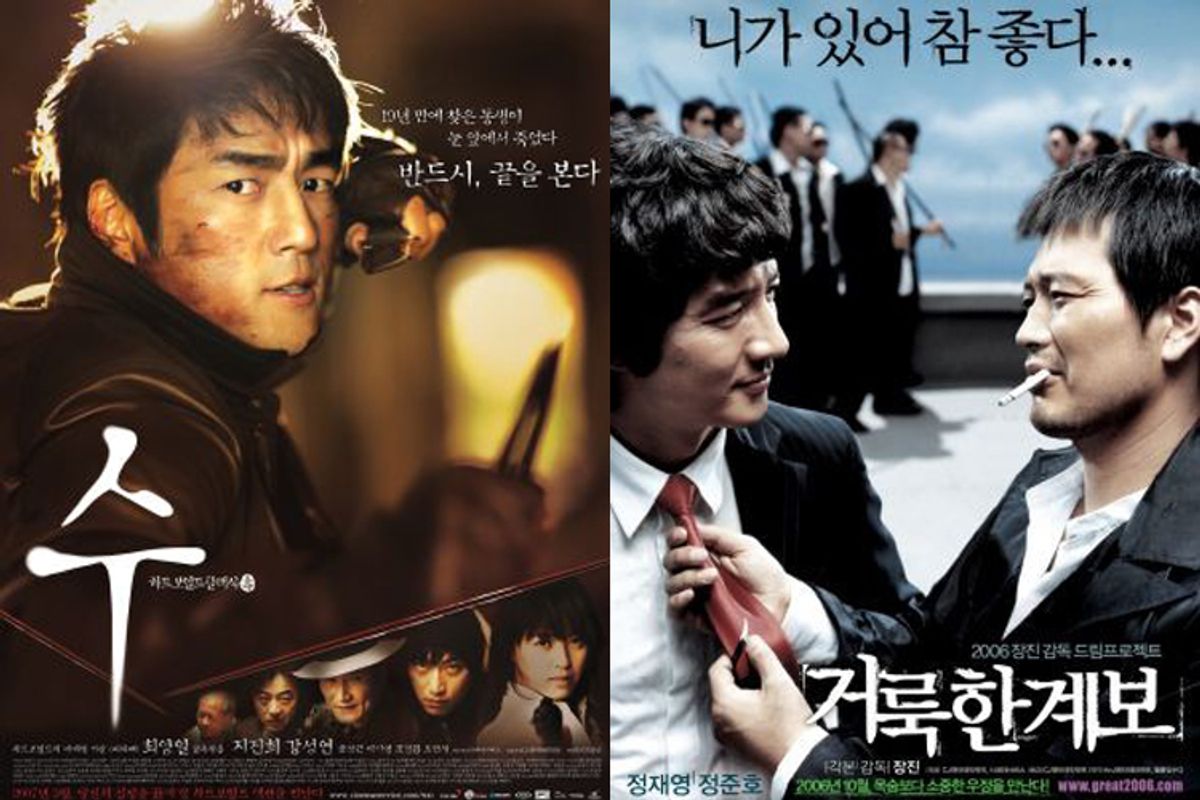 Posters for "Soo: Revenge for a Twisted Fate" and "Righteous Ties."
--

During one of my brief flirtations with breaking into the movie business, I had a phone interview with the head of a South Korean animation firm for a writing job. It was 2007 and Mel Gibson's pre-Columbian gore fest "Apocalypto" was the highest grossing movie in South Korea that year. These Korean animators had the bright idea to make a cutesy, Sanrio-esque Maya "Flintstones" complete with human sacrifices and cannibalism. During the interview, the studio chief explained his simple vision for the project in heavily accented but clear English: "Boy meets girl, boy loves girl, then boy eats girl with lots and lots of blood." It's almost needless to say that this project fell through, but I did come away from the experience with the knowledge that Koreans have, well, unique dramatic sensibilities.

"Soo: Revenge for a Twisted Fate," a South Korean crime movie, gives us lots and lots of blood, but spares us the cannibalism. However, even without the devouring of human hearts, "Soo" is a film of sometimes shocking brutality. Legs are driven over by Hyundai Sonatas and ears are ripped off with a kind of abruptness that recalls Lee Marvin's ass-kicking rampage in John Boorman's "Point Blank" (the two films are also similar thematically). There's also a scene where a man's throat is cut, not deeply enough to kill him, but just enough to look painful as all hell while he staggers around bleeding. The violence just happens here. There's no need for Japanese director Yoichi Sai ("Kamui Gaiden") to dwell on any of it, because there will always be more later on.

Tae-soo (Ji Jin-hee) is a freelance criminal obsessed with finding his long-lost twin brother, Tae-jin. As the two brothers are crossing the street for what should be a tearful reunion, Tae-jin is shot through the head by an assassin from a nearby rooftop. Tae-soo takes his brother's corpse, puts it on ice in his bathtub for a few days, and then secretly buries it when it starts to go bad. After going through Tae-jin's apartment, Tae-soo assumes his brother's identity as a potentially corrupt homicide detective. This is an interesting idea that's never given enough time to breath here as "Soo" (both the movie and its title character) are more concerned with revenge than the concept of stepping into a dead man's shoes.

When Tae-soo finds the combine responsible for putting the hit on his brother, he storms their headquarters in a gory conclusion that feels like what would happen if the ending of "Taxi Driver" went on for 15 extra minutes of carnage. Korea must have really strict gun control laws because gunplay is held to a minimum, but lots of hatchet men (some of whom actually carry hatchets) are stabbed with all manner of sharp objects. In addition to the usual sharkskin suit-wearing thugs, Tae-soo is plagued by creepy knife-wielding kids for good measure.

While "Soo" delivers revenge by the bucketful, the abruptness of its violence keeps the movie from building any kind of suspense and makes its storytelling somewhat confusing. Although I hate to advocate the remaking of Asian crime movies by American directors, "Soo" is an imperfect but interesting film that could provide strong source material for any future Scorseses or Tarantinos (or even the current ones).

Both more flawed and more interesting than "Soo" is "Righteous Ties," a uniquely Korean hybrid of earnest gangster melodrama and absurdist prison comedy that surprisingly works better as the latter than the former. Chi-sung (Jeong Jae-yeong) is the right hand man and leg stabber for mob boss Kim Yong-hee. You can't call him a leg breaker because Chi-sung really does stab guys in the leg. "We stab him seven times in the leg," Chi-sung explains. "We let him live, but with a bad leg."

During a botched errand of thigh stabbing, Chi-sung is arrested and sentenced to seven years in prison. His fellow inmates include an old communist, a serial killer, some assorted oddballs and a gangland badass who was thought to have been hanged but still lives due to a stay of execution. After Chi-sung is thrown into solitary confinement for laying waste to a mob of tattooed thugs with his tae kwon do kicks, his reputation as a top "slasher" grows through cellblock gossip. "I heard he took care of a dozen men in the subway at Mokpo," one convict says. "I didn't know they had subways in Mokpo," a disbelieving cellmate replies.

It's during this section of the film that "Righteous Ties" veers away from Mafia movie shtick and almost becomes the South Korean equivalent to Jim Jarmusch's "Down by Law." Scenes of Chi-sung reluctantly passing messages in solitary between the old commie and the psycho killer are actually, I shit you not, really funny. "What is this? Starbucks?" Chi-sung quips as the two prisoners on either side of his cell urge him to relay their innermost thoughts. By the time the tough hitman is reduced to being a chatty old hen, I was thinking that this is a movie that everyone has to see.

Unfortunately, extreme sentimentality rises up and almost chokes the life out of the movie. Chi-sung's parents are killed by one of his stabbing victims. His boss not only does nothing about it but orders Chi-Sung's death in order to close a business deal. On top of that, Chi-Sung's best friend, Joo-joong (Jung Joon-ho), is now the right hand man and must choose between loyalty to his boss or his best friend. This is pretty emotional stuff for a movie that also gives us cartoonish scenes of convicts piling up against a concrete prison wall in an escape attempt that's as ridiculous as it sounds. There are some pretty good laughs as the film heads into its third act, but the absurdist impulses that work battle it out with teary-eyed montages that don't for the remainder of its runtime.

Of course, if director Jin Jang ("Murder Take One") had pulled off this balancing act between heavy drama and odd comedy, "Righteous Ties" would be greatly influencing cinema on both sides of the Pacific even as we speak. Adding to the film's strange mix, "Righteous Ties" begins with a quote from Robert Frost's "Lodged" superimposed over a shot of a jet fighter streaking across the clear blue sky. "Rain to the wind said, 'You push and I'll pelt,'" the quotation reads. Although one of the characters says this before heading into the movie's climactic fight scene, it seems to say more about the film's own dichotomy than anything in it.

"Righteous Ties" and "Soo" originally came out in 2006 and 2007 respectively, but are just now being released on DVD by Virgil Films with English box art for the United States market. Although neither film quite lives up to its full potential, the fact that these things even have potential will make me keep an eye on this distributor's Korean releases. In the meantime, there's plenty of weird. They just sent me a screener for a Korean historical epic called "Once Upon a Time in a Battlefield." According the film's Wikipedia entry, it's a comedy about a 7th-century battle where the main hero "is forced to kill his family in fear of something worse to happen to them."