In a GQ interview, John Edwards' mistress dishes on how to not make the same mistakes Elizabeth made 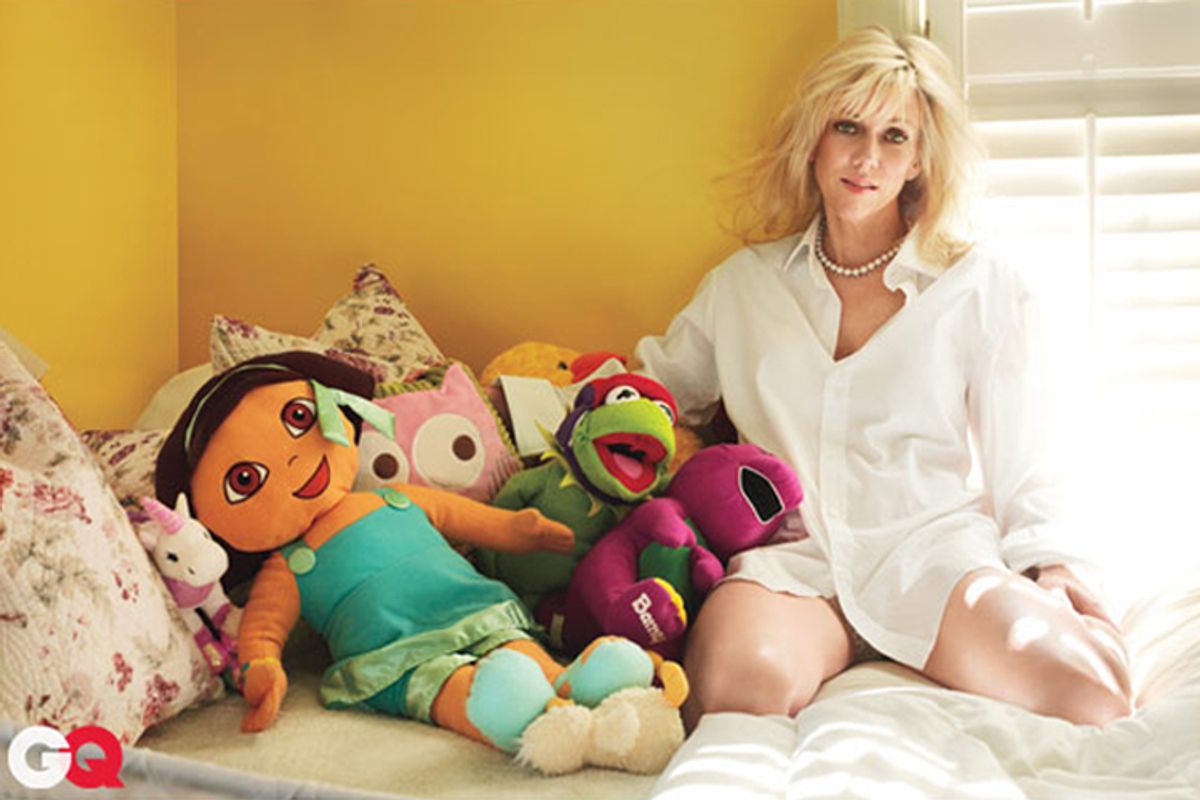 There are plenty of surprises in GQ's candid interview with Rielle Hunter, John Edwards' mistress and the mother of his child. For starters, the accompanying photos, one of which shows the 45-year-old lounging on a bed in just an oversize dress shirt (could it be John's?) accompanied by a gaggle of stuffed animals and a human-size Dora the Explorer doll.

Beyond that head-shaker, there is the revelation that Hunter -- who seems every bit the self-righteous, self-mythologizing New Age kook she's been portrayed as during her years of media silence -- fancies herself as a romance guru, a mistress turned relationship expert. Her romantic approach can be most succinctly summed up as: the exact opposite of Elizabeth Edwards'. In Hunter's view, she has gotten right everything that Elizabeth got wrong. Johnny, as she calls him throughout the interview, is 100 percent truthful with her, Hunter says, because "he has no fear that I'm going to abuse him." She continues:

And I believe what happened in his marriage is, he could not go to his wife and say, 'We have an issue.' Because he would be pummeled. So he had a huge fear. Most of his mistakes or errors in judgment were because of his fear of the wrath of Elizabeth. He's allowed himself to be pushed into a lot of things that he wouldn't normally do because of Elizabeth's story line. And the spin that she wants to put out there. He was emasculated. And you know, the wrath of Elizabeth is a mighty wrath.

Hunter clearly sees herself as Edwards' savior. (Their relationship seems built on dependency: He needs her and she needs him to need her.) Elizabeth is the punishing matriarch, whereas Hunter is the anything-goes maternal type -- she's basically like, "Sure, you can have a chocolate bar for breakfast, Johnny. Whatever my little prince wants!" She's seen her Johnny make poor decision after poor decision, but instead of saying anything, she remains mum and lets the little man figure it out in his own time. When the interviewer asks Hunter whether she ever encouraged Edwards to come clean about the affair, and his love-child, she replies:

Um, once again, in a male-female relationship, you can offer -- I mean, the way that I have learned to keep a relationship going is to offer your advice when asked for it, and love unconditionally when it's not taken. It's beyond difficult. To allow a man to be a man. The biggest mistake that I find is that women attempt to make men women. You know, we want them to be like we are. We want them to get it immediately and do things the way that we want them to do them. And men are men. And I love him for being a man. But oh, my God, yes, it's been infuriating so many times.

God forbid a woman challenge a man's masculine delusions. She explains that she is only now speaking publicly about the affair and the baby because "Johnny" has admitted to it all. "I didn't feel like I could ever speak until he did that. Because had I spoken, I would have emasculated him. And I could not emasculate him." No, never that -- then she would end up like Elizabeth: abandoned by her husband of 30-plus years and dying of cancer. Hunter continues, "Also, it is not my desire to teach my daughter that when Mommy's upset with Daddy, you take matters into your own hands and fix Daddy's mistakes. Which I view as one of the biggest problems in all female-and-male relationships." Instead, Mommy pats him on the head and smiles smugly as she waits for Daddy to figure it out for himself. Later in the interview, she explains that "he's doing the best he can ... with the awareness level he has." She continues with a laugh: "He's a man."

You see, ladies: You can disrespect and emasculate your man, you just have to make him think he's king. I've never been so convinced that these two deserve each other.