Bring it on, Ayn Rand geeks 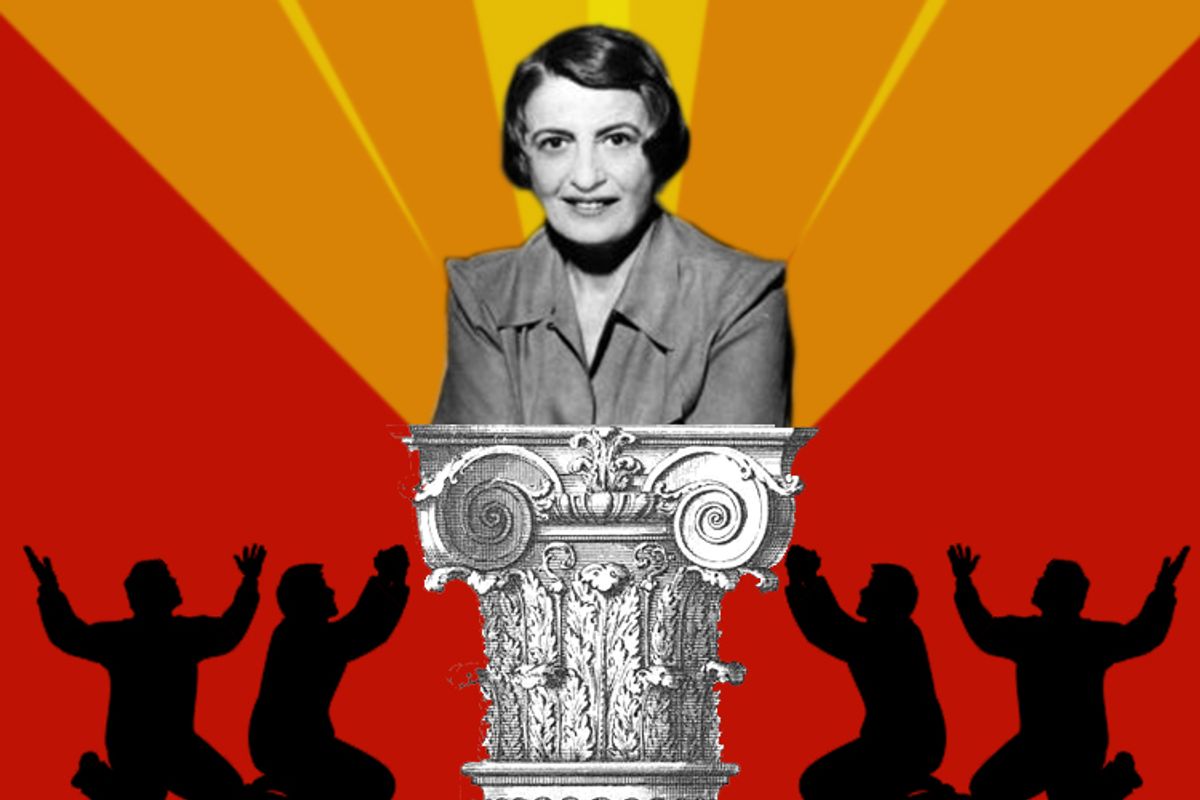 A new right is being born, following the death of the older conservative movement. Fortunately for the left, the next American right is dominated by libertarians like Ron Paul and Paul Ryan, who worship at the shrine of Ayn Rand.

Why is this great news for progressives? The American conservative movement enjoyed its successes only after William F. Buckley Jr. expelled Rand and her followers from the movement in the late 1950s. Reflecting the vanity of their guru, the Randians have long insisted that "objectivists" are not libertarians. (Pssst: They are!) The non-Randian libertarians split with the mainstream conservative movement in the 1960s, complaining that conservatives were too interventionist in foreign policy and too soft on big government at home. Having lost the libertarian isolationists, the conservatives went on to success after success, dominating the presidency after 1968 and Congress in 1994.

Buckley's "movement conservatism" sought to unite the anti-communist, socially conservative and free-market wings of the right on the basis of an ideology of "fusionism" cooked up by National Review editor Frank Meyer. This did not work, and by the 1980s there were three distinct political-intellectual movements on the right: the neoconservatives (originally pro-Cold War social democrats and liberals), the religious right and the libertarians. The coalition survived the end of the Cold War, but not the presidency of George W. Bush.

What we are seeing now, in the second decade of the 21st century, is the rise of the libertarian right, at the expense of the neocons and social conservatives.

Following the fall of the Berlin Wall, many former neoconservatives, like the late Daniel Patrick Moynihan and yours truly, concluded that we could resume the project, interrupted by the Cold War, of building a Rooseveltian liberal internationalist order, based on a great-power concert and international law. A remnant of the Cold War neocons, based at the American Enterprise Institute and Rupert Murdoch's the Weekly Standard, rejected this in favor of a project to convert America's temporary Cold War primacy into a militarized, permanent Pax Americana.

The neocons were marginalized under Clinton, but 9/11 gave them an excuse to carry out projects such as the invasion of Iraq and the encirclement of Iran, neither of which had anything to do with jihadism, under the Orwellian label of "World War IV." When Bush embraced their agenda and invaded Iraq, conservative voters initially rallied behind the flag, but by the second Bush term the public had turned against the Iraq war, the neocons were purged and Defense Secretary Robert Gates, a realist, was brought into the Bush administration as trustee in bankruptcy. The neocons have been sidelined again, possibly forever.

The religious right, too, is in decline. Protestant evangelicals were never as numerous or as electorally powerful as Jerry Falwell and Pat Robertson claimed. The Protestant religious right benefited from a backlash against the cultural liberalism of the 1960s on the part of working-class and middle-class white Americans. That backlash, however, appears to have been a generational phenomenon. Younger Americans are less racist, more educated, more secular and more liberal on social issues. Archie and Edith Bunker have passed away, and Gloria and the Meathead voted for Obama.

It is hardly surprising, then, that libertarianism is the beneficiary by default of the relative decline of its rivals on the right, neoconservatism and the religious right.

It is merciful, perhaps, that Buckley did not live to see the detested Ayn Rand become the central intellectual figure on the right. Until recently the only prominent conservative known to have been influenced at one point by the Evita of the nerds was Alan Greenspan, and he was given a pass for a youthful indiscretion. Now two of the stars of the emergent right, Ron Paul and Paul Ryan, are professed disciples of the Mary Baker Eddy of egotism. "The reason I got involved in public service, by and large, if I had to credit one thinker, one person, it would be Ayn Rand," Ryan told a convention of Randians in 2005.

Glenn Beck, another rising star on the right, sounds Randian in his denunciation of the idea of Christian social justice as misleading progressive propaganda. It was Rand's hatred of religion and her praise of selfishness that irked Buckley and the movement conservatives, who were more concerned about preserving what they saw as Western civilization from communism and relativism than with creating a free-market utopia.

All of this is great news for American progressivism. In the last third of the 20th century, many liberals who supported New Deal economic policies defected to the right on the basis of the Cold War or the culture war. Now that the Cold War and the culture war are over, what remains is the class war. And in the class war, the libertarians are on the side of the classes.

Consider Ryan's "Roadmap for America's Future." As the Center on Budget and Policy Priorities has pointed out, it would raise taxes on middle-class Americans while dramatically lowering them on the über-rich. Ryan would use a national value-added tax (a good idea) to replace income, capital gains and estate taxes (a terrible idea). He would privatize Social Security and replace Medicare with vouchers, and then allow inflation to eat away at the value of the vouchers. Oh, and despite his claims, his Rand-inspired redistribution of income upward to the virtuously selfish rich would not eliminate the deficit.

The media is building Ryan up as a serious thinker. Build him up even more, I say. Give him a Nobel Prize, like Obama's. Make him the face of the Republican Party. Progressives should want Ryan and Paul and the Cato Institute to define the next American right. That will ensure its minority status for decades.

Before Buckley and the movement conservatives took the right in another direction in the 1950s, this country had a libertarian, isolationist right, the right of Robert A. Taft and Alf Landon. Thanks to their opposition to the New Deal, U.S. entry in World War II and the Cold War, the libertarian isolationists turned the Republicans into the minority party between 1932 and 1968. The only Republican to be elected in that era, Dwight Eisenhower, ran for the presidency in 1952 to save the GOP from Taftian isolationism and dismissively rejected suggestions that the Republicans try to repeal New Deal programs like Social Security.

Richard Nixon, like Ike, was a modern Republican whose formula for a Republican majority was big government on behalf of the middle class plus a hawkish foreign policy and moderate social traditionalism. The neoconservative writer David Frum has argued that this is the only possible combination that can produce an enduring Republican majority. I agree, and it is therefore with delight that I observe the rise of radical libertarianism in the GOP.

True, thanks to the popular backlash against the bailouts and the unpopular healthcare bill, the Democrats will suffer losses in the midterm elections. The Randian right will claim that Republican gains in Congress are proof that the American people share their goal of abolishing Social Security and Medicare. They should be encouraged in that belief.

After all, the public has repeatedly rejected any attempts to privatize Social Security or slash Medicare benefits. Reagan denounced both entitlements, but as president he raised taxes to support Social Security and refused to touch Medicare. Under George W. Bush, a Republican Congress passed the Medicare drug benefit, which, for all its concessions to the pharma lobby, was the biggest expansion of socialized medicine in the U.S. since Lyndon Johnson signed Medicare into law.

When Bush supported the partial privatization of Social Security, the proposal was so unpopular with the public that the Republican majority in Congress never allowed it to come to a vote. Bush touched the third rail of American politics -- and was promptly electrocuted. Last but not least, one of the arguments that Republicans opportunistically used to mobilize popular opposition to the Democratic healthcare bill was the claim that it would lead to cuts in Medicare for the elderly.

AARP vs. the objectivists. That's not a fight, it's a massacre.

There is not the slightest chance that either Social Security or Medicare will be privatized in an America where the proportion of the elderly in the electorate will continue to expand. Any attempt to means-test Social Security for the middle class, rather than the rich alone, will be quickly punished by the voters. The most that the right can do would be to use indexing tricks to allow inflation to reduce the value of Social Security, but surely progressives and centrists will be around to point this out.

Medicare will not be replaced by Ryan's scheme of inflation-diminished vouchers. But there is a genuine danger that the Democrats, along with the Republicans, will continue to put medical price controls off the table and instead will try to reduce benefits to pay for the inflated rewards of American physicians (other than primary care doctors), insurance companies and pharmaceutical companies.

Other countries that do not have single-payer systems have avoided cancerous cost inflation by means of "all-payer regulation," in which the government sets the prices ("fee schedules") of all medical services and goods, private as well as public. Obama and the Democrats are too intimidated by the health industry lobby even to talk about the primary method of health cost containment used everywhere else, as well as in the state of Maryland, which has its own successful rate-setting system.

But interest in all-payer regulation is growing, and in the next decade or two, if it comes down to a choice between government regulation of medical prices and the immiseration of middle-class voters, my bet would be on regulation.

The biggest danger is that Democrats will misinterpret the coming electoral setbacks to mean that they need to move in a libertarian direction. That would repeat the mistake made by Bill Clinton, Al Gore and the other New Democrats during the Reagan era. It was their failure to understand that foreign policy and the culture war, not conservative economic policies, were the basis for Republican victories -- that, and the fact that they did Wall Street's bidding for Wall Street's campaign contributions -- that inspired these neoliberals to move to the right on economics: "The era of big government is over."

Obama's instinct is to appease those who attack him, so there is a danger that he might move (further) to the market fundamentalist right. But Obama is not the Democratic Party, and the party's progressive base is increasingly hostile to Carter-Clinton-Obama neoliberalism.

So bring it on, geeky disciples of Ayn Rand. Gird thy loins and put on thy Spock ears. Demand the abolition of Social Security and Medicare! Call for reducing the U.S. military to the Coast Guard! Insist on tolling every highway and street in America and selling America's infrastructure assets to foreign corporations and foreign sovereign wealth funds! Go Galt!

Bring it on! Even confined to a wheelchair, Franklin Roosevelt can defeat Ayn Rand.