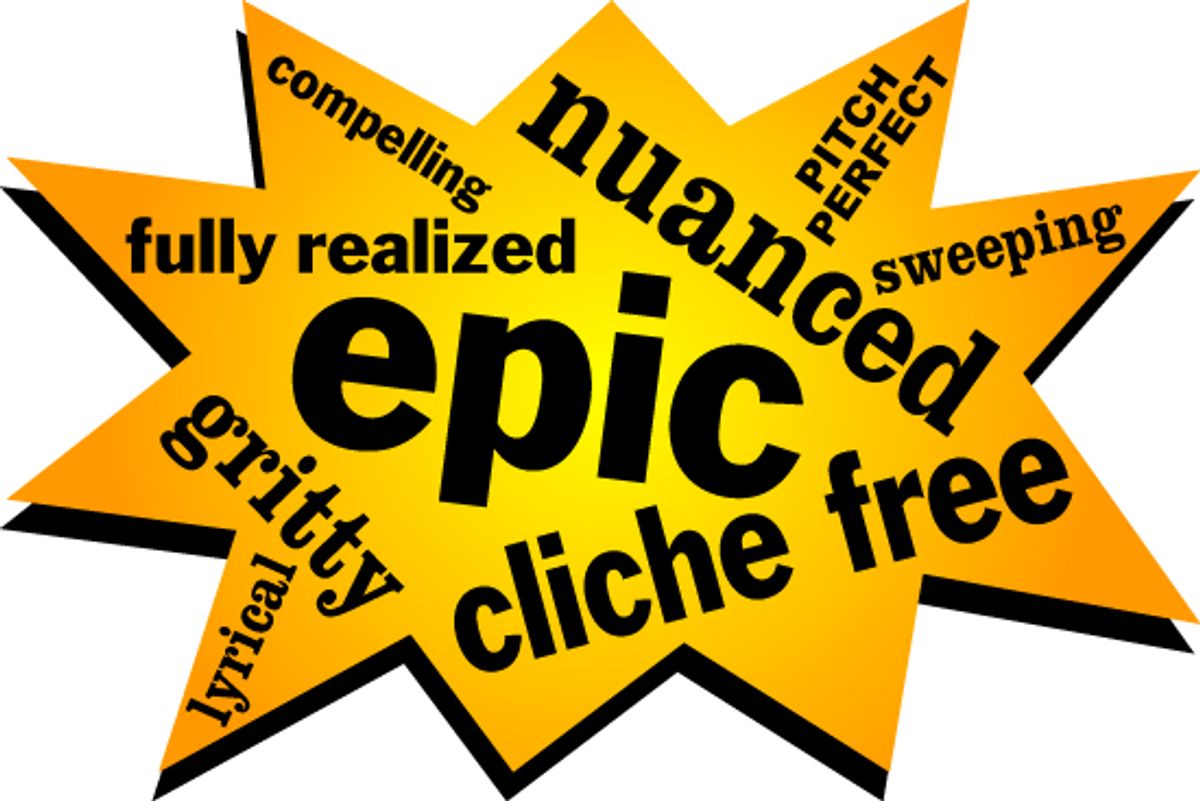 If there's a hell for book reviewers (and I'm sure many authors hope there is), no doubt we will spend eternity there being jabbed by trident-wielding imps bearing certain adjectives emblazoned across their brick-red chests: "compelling," "lyrical," "nuanced" and so on. Even in this world, the conscientious critic is bedeviled by clichés; how many ways are there to say that a book is "beautifully written" or that the characters in it are "fully realized" instead of "two-dimensional"? These are the words that rise up in a reviewer's mind, like those clouds of gnats that ruin so many walks in the woods. No matter how hard you try to bat them away, they just keep coming back.

The war against cliché (to cop a phrase from Martin Amis) gained a new weapon this week, when Michelle Kerns, who writes a smart, cheeky books column for Examiner.com -- an outfit described, alternately, as a "hyperlocal" platform for "citizen journalists" or a "pay-per-click meat market" owned by conservative Colorado billionaire Philip Anschutz -- created a new game: Book Review Bingo. Kerns took a list of the most egregious book reviewer clichés she'd compiled in an earlier column and arranged them in 5-by-5 grids as bingo cards.

Kerns urges her readers to distribute the cards to their bookish friends, then have everyone sift through "the week's reviews/book jackets/gushing publicity sheets" searching for hackneyed words and phrases. Whoever gets a bingo first wins, although, "Playing for a blackout will absolutely be a requirement when reading some publications."

Within a couple of hours it seemed like every book reviewer in the country had been forwarded multiple links to Kerns' column. "It's getting worse," tweeted Ron Charles, fiction editor and critic for the Washington Post Book World. "People in the office are now emailing me Book Reviewer Cliché Bingo without comment." In silent shame, dozens (if not hundreds) of delete keys wiped out instances of "poignant" and "gritty" and "tour de force."

Every writer has his or her pet words, words that, however ideal they seemed the first time you selected them, have long since worn out. The New York Times' Michiko Kakutani is famous for relying on the verb "limn" -- a choice often derided because no one uses that word in actual speech. As a general rule, though, well-worn verbs are more forgivable than tired adjectives, simply because there are relatively few of them that work without calling undue attention to themselves; which synonyms for "describe," "portray" and "relate" wouldn't sound hopelessly artificial if you were determined not to use such old, reliable workhorses?

Now, I pride myself on never employing "lyrical" (except ironically) or "rollicking," but I must plead guilty to variations on "haunting" and "powerful." What's at stake is more than just lackluster prose. As Kerns wrote to me in an e-mail, when she scrutinized her own use of clichés more closely, she realized that she fell back on them whenever she was "avoiding giving a solid opinion on anything. I was too afraid to just say, 'I hated this and this is why' or 'I thought this was great and this is why.' I used the clichés to fudge on exposing myself and sidestep saying anything that someone else might disagree with."

With this larger purpose in mind, I subjected my own reviews for the past several months to Book Review Bingo. While I was heartened to learn that I have never succumbed to the temptations of "unputdownable" or "riveting," I nevertheless earned a bingo on the very first card, due to my terrible fondness for the constructions "that said" and "at once," and my inability to resist the "X meets X" formulation in the very last review I wrote for Salon. Also, as I am utterly ashamed to admit, I once used the word "stunning."

As for my own irritants, the word "luminous," while not quite a cliché yet, is nevertheless a dead giveaway that the book under consideration is prettily written but dull. "Magisterial" is a word over-applied to nonfiction that is intimidatingly lengthy. And while I have indulged in "generous" (i.e., long and warm-hearted) myself in the past, it's time to give that one a rest, too.

I promise to try to do better in the future, and invite the readers of Salon to nominate their own pet peeves. We have nothing to lose but our chestnuts.