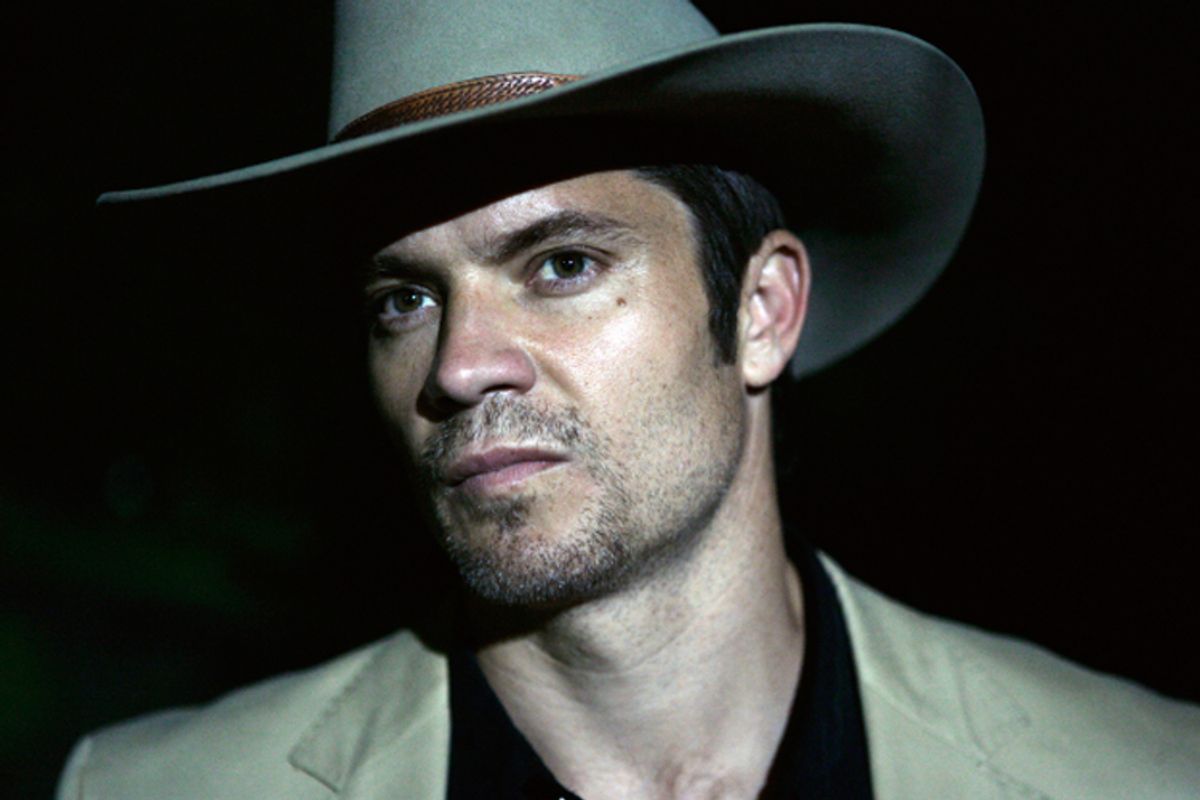 Great dialogue can make you fall in love with a story and its characters. It's easy to lose sight of that when you're watching TV, because TV dialogue is mostly used to move the action forward. On "24," the dialogue reads like a plot summary. Even on more nuanced shows like "House" or "Grey's Anatomy," characters are assigned opposing stances and mouth out obvious conflicts on-screen, lending the whole charade the conviction of a high school debate team meet where each side has an arbitrary position to defend.

Raylen: I'm sorry if I crossed a line with you at the office. If I shouldered my way to the front of the line, it wasn't intentional. I can imagine how hard it's been for you to get where you are in the Marshal service.

Rachel: Because I'm black or because I'm a woman?

Raylen: Because you're an idiot.

Raylen: (smiling) I didn't shoulder my way to the front of the line.

Rachel: I didn't say that, you did.

Raylen: Look, I understand I'm the low man on the totem pole, I understand that. But Rowland and I have a long history and I should be walking point.

Rachel: This isn't just about this case. You did cut to the front of the line. I don't know if it's because you know the chief from Glencoe, but you walked in and you went right to the front.

Raylen: You ever consider I happen to be good at the job?

Rachel: And you being a tall, good-looking white man with a shitload of swagger, that has nothing to do with it? You get away with just about anything.

Raylen: What do I get away with?

Rachel: Look in the mirror. How do you think it'd go over if I came into work one day wearing a cowboy hat? You think I'd get away with that?

Raylen: Want to try it on?

Aside from the unpredictable turns this conversation takes, what's wonderful about this scene -- and so many scenes in "Justified" -- is that we can't decide whom we like more, our hero or the person with whom he's trading barbs. Leonard once said he's never written a bad guy he didn't like, and that shows on the screen -- not just in sketchy types like Boyd (Walton Goggins, see also: Shane from "The Shield"), the white supremacist whose racist beliefs Raylen suspects are merely a shabby cover for his deep-seated desire to blow shit up, but also in Roland Pike (Alan Ruck), the hangdog criminal on the run from the law and from his drug cartel enemies. In fact, no character appears on "Justified" without kicking up a little of our interest: Flirtatious but murderous wives have an empowered, unapologetic air about them, bosses have a world-weary ease to their words. (When someone reports that they can't find Harlan, Ky., on an online map, Chief Deputy Art Mullen [Nick Searchy] replies, "I guess some places haven't been entered into the system yet, like North Korea, and Raylen's hometown.") Even Raylen's ex-wife Winona (Natalie Zea) is sharp-tongued but sympathetic to him in a way that makes us hope for an eventual reunion.

On paper, FX's "Justified" might appear to be just another procedural with a little excess flair. The show is a western set in modern times starring our gun-toting hero Raylen, the sort of lawman who will politely ask for compliance, but won't hesitate to shoot a bad guy in the belly before he can even react. ("I want you to understand, I don't pull my side arm unless I'm going to shoot to kill. That's its purpose, to kill, so that's how I use it. I want you to think about that before you act and it's too late," Raylen tells one criminal who's considering his options.) Throw in the levity and appeal of USA's "In Plain Sight" or "Burn Notice," and it's easy to see why this is the sort of thoroughly modern drama that a channel like FX adores.

Based on the first three episodes, though, "Justified" is far richer and harder to ignore than other procedural dramedies of its ilk, thanks to the show's unusually seamless mix of sly humor, weighty moments and suspense. While the heaviness always feels a little out of place on the mostly wacky but always delightful "Burn Notice," for example, there's a heft to "Justified" that makes you root for Raylen the way you might root for the most compelling characters of the small screen, from Vic Mackey of "The Shield" to Jimmy McNulty of "The Wire." Now throw in imaginative storylines and characters whose motivations are never simple -- no one is evil, exactly, just stupid and deluded at worst, and we're offered at least a few reasons to side with even the most reprehensible bastards among them -- and you've got one of the best new shows of the season.

Yet somehow the complexity of "Justified" never leaves us in the same disheartening ethical mire we find ourselves in after watching other shows this dark. On "Justified," characters who do bad things sometimes pay for it, and sometimes they don't, and those who are "good" try to live up to their ideals, and often fail. Instead of concerning itself with malevolent forces or valiant heroes battling on an epic stage, "Justified" focuses on the trivial delusions and tragic screw-ups of everyday people. Jokes are told, mistakes are made, and no one can predict how it will all turn out in the end. Sound familiar?