They're young, they're broke, and they pay for organic salmon with government subsidies. Got a problem with that? 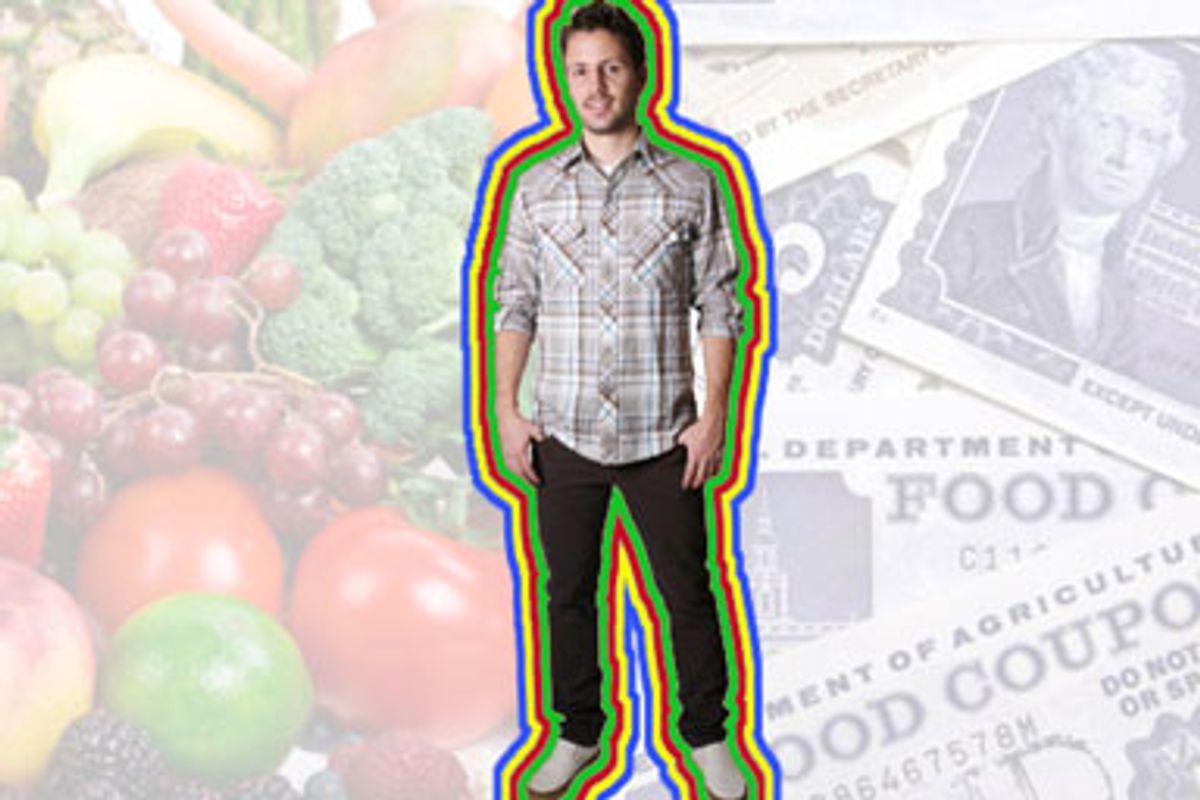 In the John Waters-esque sector of northwest Baltimore -- equal parts kitschy, sketchy, artsy and weird -- Gerry Mak and Sarah Magida sauntered through a small ethnic market stocked with Japanese eggplant, mint chutney and fresh turmeric. After gathering ingredients for that evening's dinner, they walked to the cash register and awaited their moments of truth.

The two friends weren't tabulating the cash in their wallets but what remained of the monthly allotment on their Supplemental Nutrition Assistance Program debit cards, the official new term for what are still known colloquially as food stamps.

Magida, a 30-year-old art school graduate, had been installing museum exhibits for a living until the recession caused arts funding -- and her usual gigs -- to dry up. She applied for food stamps last summer, and since then she's used her $150 in monthly benefits for things like fresh produce, raw honey and fresh-squeezed juices from markets near her house in the neighborhood of Hampden, and soy meat alternatives and gourmet ice cream from a Whole Foods a few miles away.

"I'm eating better than I ever have before," she told me. "Even with food stamps, it's not like I'm living large, but it helps."

Mak, 31, grew up in Westchester, graduated from the University of Chicago and toiled in publishing in New York during his 20s before moving to Baltimore last year with a meager part-time blogging job and prospects for little else. About half of his friends in Baltimore have been getting food stamps since the economy toppled, so he decided to give it a try; to his delight, he qualified for $200 a month.

"I'm sort of a foodie, and I'm not going to do the 'living off ramen' thing," he said, fondly remembering a recent meal he'd prepared of roasted rabbit with butter, tarragon and sweet potatoes. "I used to think that you could only get processed food and government cheese on food stamps, but it's great that you can get anything."

Think of it as the effect of a grinding recession crossed with the epicurean tastes of young people as obsessed with food as previous generations were with music and sex. Faced with lingering unemployment, 20- and 30-somethings with college degrees and foodie standards are shaking off old taboos about who should get government assistance and discovering that government benefits can indeed be used for just about anything edible, including wild-caught fish, organic asparagus and triple-crème cheese.

Food policy experts and human resource administrators are quick to point out that the overwhelming majority of the record 38 million Americans now using food stamps are their traditional recipients: the working poor, the elderly and single parents on welfare.

But they also note that recent changes made to the program as part of last year's stimulus package, which relaxed the restrictions on able-bodied adults without dependents to collect food stamps, have made some young singles around the country eligible for the first time.

"There are many 20-somethings from educated families who go through a period of unemployment and live very frugally, maybe even technically in poverty, who now qualify," said Parke Wilde, a food economist at Tufts University who has written extensively about food stamp usage and policy.

The increase in food stamp use among this demographic is hard to measure, as they represent a cross section of characteristics not specifically tracked by the Agriculture Department, which administers the program.

And in cities that are magnets for 20- and 30-something creatives and young professionals, the kinds of food markets that specialize in delectables like artisanal bread, heirloom tomatoes and grass-fed beef have seen significant upticks in food stamp payments among their typical shoppers. At the Wedge, a market in the stylish Uptown neighborhood of Minneapolis; at New Seasons Market, a series of nine specialty stores in and around Portland, Ore.; and at Rainbow Grocery, a stalwart for food lovers in San Francisco's Mission District, food stamp purchases have doubled in the past year.

"The use has gone way up in the last six months," said Eric Wilcox, a cashier who has worked at Rainbow Grocery in San Francisco for 10 years. "We're seeing a lot more young people in their 20s purchasing organic food with food stamp cards. I wouldn't say it's limited to hipster people, but I'm certainly surprised to see them with cards."

Young urbanites with a taste for ciabatta may legitimately be among the new poor, but their participation in the program is far from universally accepted. A New York Times story in late November about the program's explosive growth generated a storm of comments online, with many readers lobbing familiar accusations of laziness and irresponsibility.

But there seems to be a special strain of ire reserved for those like the self-described "30-something, unemployed, ex-fashionista, EBT armed, post-hipster, downtown mom" from New York who, in January, drew nearly 500 comments on the Web site Urbanbaby.com, many seething with fury at her for trying to maintain the trappings of a materialistic, cosmopolitan life while using an Electronic Benefit Transfer card -- food stamps -- to feed her family. (Her blog is now password-protected.)

"You're hosting dinner parties and buying cases of wine -- on taxpayers' money!" one person wrote. "Your attitude is so objectionable that you're like a trainwreck; it's hard to look away." (One cannot, in fact, buy wine with food stamps, though dinner party ingredients are fair game.)

And on the blog Stuff Unemployed People Like, along with "not showering regularly" and "sleeping in while your significant other goes to work," a post last year touted "buying Perrier with food stamps" and sarcastically claimed that "the fancier the food, the more glee there is in knowing the government has once again helped in enabling a lavish lifestyle." Of the reader responses that poured in, many were food stamp users who defended their shopping choices (including, yes, Perrier) while others attacked them.

"While one person works their butt off," one wrote, "another is just waiting in line so they can recieve [sic] their 'luxury' food stamps and recieve [sic] basically whatever they want."

But among young food stamp recipients I spoke with, there's less glee than traces of embarrassment about their situations; few want to be seen handing over applications at the human resource office, and they can be sheepish about presenting their snap cards in a checkout line.

Josh Ankerberg, a 26-year-old who lives in Brooklyn, N.Y., started getting food stamps a year ago as an AmeriCorps volunteer, a group that has long had special dispensation to qualify for them, and he has continued using them while he job hunts. He uses his $200 in monthly benefits at Trader Joe's, Whole Foods and a local farmer's market to maintain his self-described healthy flexitarian diet, and notes that two of his roommates -- a graduate student in poetry and an underemployed cook, both in their 20s -- also started getting food stamps in the past two months, as have other friends and acquaintances.

Still, Ankerberg said, "There's a sort of uneasiness about it. A few friends that are artists in Williamsburg are like, 'Don't say we're on food stamps too loudly. Just keep it between you and me.'"

At the same time, there seems to be little moral quandary about collecting a benefit traditionally thought of as intended for the downtrodden. In a nondiscriminating recession that laid waste almost across the board, the feeling is that anyone who meets the near-poverty level requirements for collecting food stamps shouldn't feel guilty about doing so.

Controversy about how they use food stamps marks an interesting shift from the classic critique that the program subsidizes diets laden with soda pop and junk food. But from that perspective, food stamp-using foodies might be applauded for demonstrating that one can, indeed, eat healthy and make delicious home-cooked meals on a tight budget.

And while they might be questioned for viewing premium ingredients as a necessity, it could also be argued that they're eating the best and most conscious way they know how. They are often cooking at home. They are using fresh ingredients. This is, after all, a generation steeped in Michael Pollan books, bountiful farmer's markets and a fetish for all things sustainable and handcrafted. Is it wrong to believe there should be a local, free-range chicken in every Le Creuset pot?

At Magida's brick row house in Baltimore, she and Mak minced garlic while observing that one of the upsides of unemployment was having plenty of time to cook elaborate meals, and that among their friends, they had let go of any bad feelings about how their food was procured.

"It's not a thing people feel ashamed of, at least not around here," said Mak. "It feels like a necessity right now."

Savory aromas wafted through the kitchen as a table was set with a heaping plate of Thai yellow curry with coconut milk and lemongrass, Chinese gourd sautéed in hot chile sauce and sweet clementine juice, all of it courtesy of government assistance.

"At first, I thought, 'Why should I be on food stamps?'" said Magida, digging into her dinner. "Here I am, this educated person who went to art school, and there are a lot of people who need them more. But then I realized, I need them, too."

Jennifer Bleyer is a reporter for News for Change (www.newsforchange.com).