Getting the bankers out of the Fed

See ya later, Jamie Dimon. Under the Dodd bill, bankers will no longer be able to choose their own supervisors 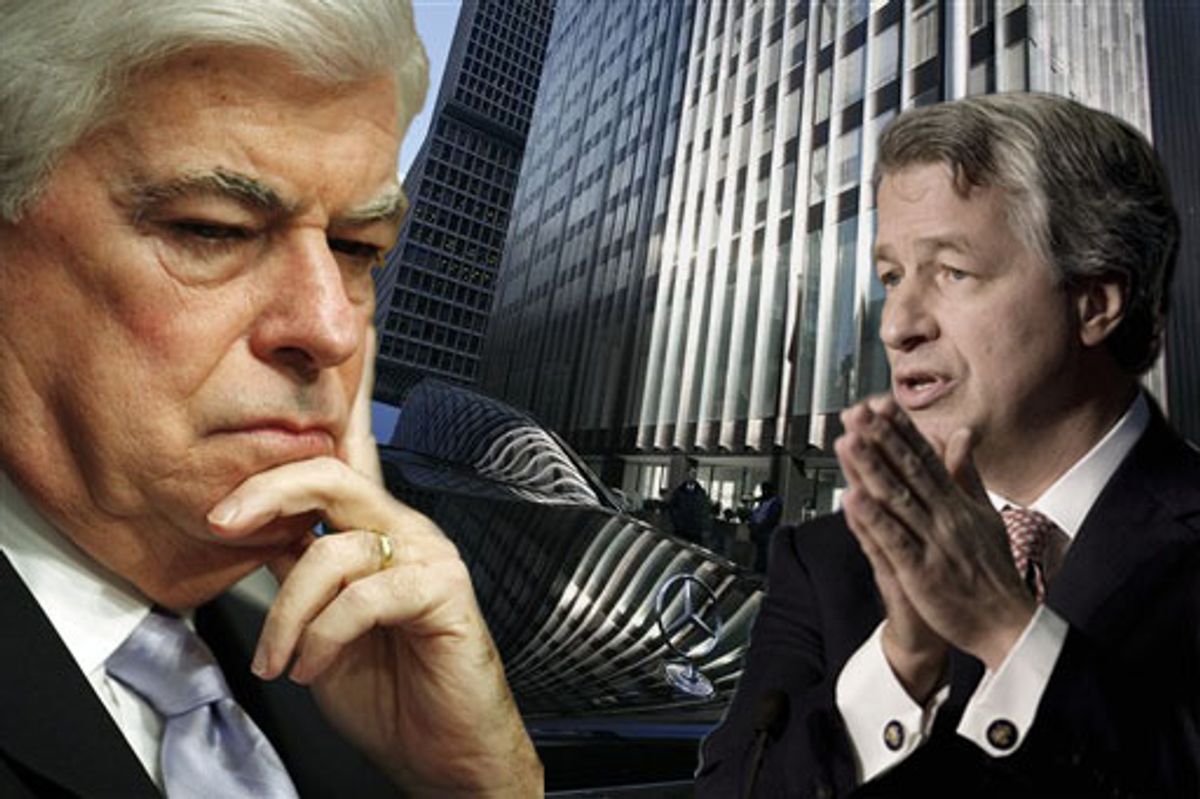 A luxury limousine is parked in front of JPMorgan Chase & Co. headquarters, left, Thursday, Jan. 14, 2010 in New York. Together, the six biggest U.S. banks, including JPMorgan Chase, are on pace to pay $150 billion in total compensation for 2009, slightly less than the record $164 billion in 2007 before the financial crisis struck, according to the New York state comptroller's office. (AP Photo/Mark Lennihan) (Mark Lennihan)
--

Pack up your bags, Jamie Dimon. The CEO of JPMorgan Chase currently serves as a Class A director of the Federal Reserve Bank of New York, which is awfully convenient, considering that the FRBNY is charged with supervising his bank. But if Sen. Chris Dodd's proposed "Restoring American Financial Stability Act" emerges from the legislative grinder intact, Dimon and other Wall Street bankers will no longer have a near-automatic seat on the regulatory body charged with watching over them.

The new proposal would bar appointments of Wall Street bankers as directors at the New York Fed.

I hadn't seen this news elsewhere, and it took a little digging to find the relevant text in the bill. And having done so, it's unclear that the bill specifies exactly what the FT is reporting.

Directors of class A and class B shall be chosen in the following manner: The Board of Governors of the Federal Reserve System shall classify the member banks of the district into three general groups or divisions designating each group by number. Each group shall consist as nearly as may be of banks of similar capitalization. Each member bank shall be permitted to nominate to the chairman of the board of directors of the Federal reserve bank of the district one candidate for director of class A and one candidate for director of class B.

Under the Dodd bill all class A and B directors will be appointed by the Board of Governors of the Federal Reserve System. The Bill also directs that the Board of Governors, "shall establish a public process for soliciting comments relating to the selection of Class B and Class C directors of the Federal reserve banks, to ensure that the interests of agriculture, commerce, industry, services, labor, and consumers are adequately represented."

So I'm not sure the FT has it quite right. As I read the bill, the Board of Governors can appoint whomever they like -- but member banks can no longer elect their own representatives. So as long as the banking lobby wields enough influence to ensure that "acceptable" people are appointed to the Board of Governors, there likely won't be much in the way of unpleasant surprises for Wall Street. But ending the process in which JP Morgan and Citigroup and all the rest are allowed to elect their own CEOs to serve on the regulatory body that oversees them still seems like a positive step. We'll see if it makes it through to law.