The death of the library book 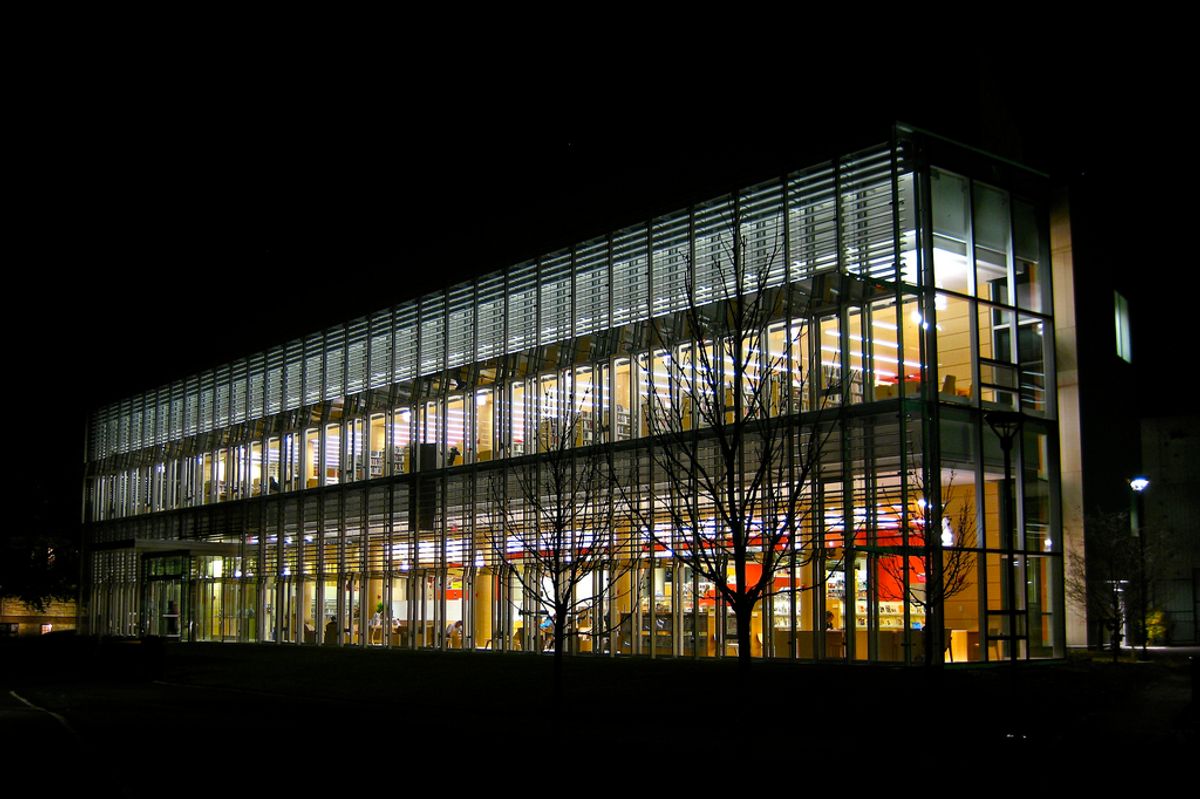 The new addition to the Cambridge Public Library
--

I'm amazed at what I get for free in public libraries. Books, big tottering stacks of books, but there's also computer access and, in the last few years, free Wi-Fi. When my son was younger, we went to story hours and singalongs.

Libraries are one of the great loves of my life. That's why a hearing last week about the Boston Public Library's proposal to close some neighborhood branches has me on edge. And several months after the opening of the new main library in Cambridge, I find myself asking an unexpected question.

What's the purpose of libraries -- really? To be a community gathering place? To promote lifelong learning? To help users navigate the information flow? To store print documents for the historical record, as Nicholson Baker argues they should (and aren't) in "Double Fold: Libraries and the Assault on Paper"?

Libraries can serve all these functions. But what they mean to us as physical spaces is changing, and the information-science vision has now been enshrined at Cambridge Main.

When I visited the new building recently, I saw people; I saw open shelves and attractively displayed books. But few people were reading those books, and I saw way too much unused space, the kind of emptiness beloved by architects.

From the third floor, I stared down at a slim man in a chair. He had a laptop on his knees; ear-buds dangled against his black-sweatered chest. Behind him sat more glowing screens on Ikea-like desks.

The laptop users perched on the second floor in a glassed-in bay. I was up in the children's room -- no longer a room but a vast acreage at the top of the building -- sitting in a chair that looked as if it was hewn from an exotic log.

Of course I'm only one observer, floating through on a weekday afternoon. The new main branch opened just last November. Its systems have yet to be tested, and it will evolve over time, with plenty of community backtalk.

But the building, a glass box that's attached to the old Victorian-era gothic fancy, also reflects new ideas about information and who gets access to information. It has none of the old clutter, and for me, that's a problem.

"The older building's Richardsonian Romanesque style is all about ponderous granite and brownstone and circular geometry—arches, cylinders, and cones. The glass addition goes in the opposite direction aesthetically: it is light, transparent, crisp, and orthogonal."

Yes, it's an orgasmic spread from Architectural Digest. It's a po-mo watering hole, complete with dark pink walls and stairways. But I wonder who this design is supposed to attract. If you're not middle-class, college-educated, and adorned with an iPhone or laptop -- or, more to the funding point, a potential donor -- I have my doubts about how inviting this is.

I also question all the open space in the entrance area. I question the unspoken belief that the books are a design element, like potted plants. When the building first opened last fall, the glowing review in the Boston Globe noted that library director Susan Flannery "wanted to create a 'hybrid' that would mix the qualities of a library and a retail bookstore."

A retail bookstore? With all its emphasis on market share? I feel the cold hand of commerce squeezing my lefty heart.

In a town of bookish big mouths, revamping the main library was political and emotional; a 20-year resident of Cambridge, I remember it well. Local press has since been enthusiastic. But although the old building needed lots of fixing, I'm now reevaluating my own opinion of whether the city should have spent $91 million on this architectural marvel.

If nothing else, the hearing about the Boston libraries, as reported in the Globe and other papers, makes clear that such decisions involve triage. It also hints at attitudes about what kind of information "sells." If you've got money for new facilities, do you focus on storing print documents (as Nicholson Baker would promote) or build the equivalent of a Barnes & Noble? If you don't have money, what matters? Computers? Children's activities? New or old books?

The angry voices at the hearing weren't asking for new buildings or computers. They just wanted the old branches to stay open. "It's outrageous that it has come to this," the Globe quoted one Dorchester resident at the packed hearing, who accused Mayor Tom Menino of chucking libraries "as a 21st-century anachronism, something that can be replaced by Yahoo and Google."

The president of the Boston Public Library, as well as the library board chair, argued that there weren't enough computers or staff to go around. But one active member of a threatened library branch asked if the decision really was just about money: "Even if a miracle happened and you got your $3.6 million, would you still be looking to close branches?"

Library administrators noted that an infusion of money would help, but they didn't deny that they still might consolidate services and staff.

Meanwhile, protests continue. As Globe columnist Renee Loth notes, the library "is threatening to become the site of a classic Boston brawl, with neighborhoods [pitted] against one another clamoring over a shrinking pie." This past Saturday, adults and children staged a "read-in" at one branch.

In Cambridge, after watching the laptop users, I walked down the pink stone stairway to the nonfiction stacks. I found "Double Fold" and settled into a Danish-modern reading chair. OK. I loved my view of rooftops and clouds through the windows. I liked the whisper-clicks of keyboards all around me. I'm the target audience. But if I'd wanted to, I could have ordered "Double Fold" by logging on to the library network at home. I didn't need to be there -- but then that brings up questions about why anybody needs to be in a library.

I continued down to the ground floor with its "cafe" and alcove of vending machines. The round metal tables were thronged by chattering high school students from Cambridge Rindge and Latin next door.

I followed the signs back to the old building. (The new building is called "Glass," the old "Stone.") One of the reading rooms with its WPA murals is still open to the public. Its built-in shelves are stocked with large-print books. The intended demographic is obvious, although few people occupied these tables.

The restored murals illustrate the history of printing, beginning with the ancient Egyptians and Chinese, then shifting to "1422-1491: William Caxton, the First English Printer" to Benjamin Franklin and Gutenberg. I thought about what a 21st-century panel might depict. Rows of computers? Shuttered newsrooms? Words vaporizing?

Yet the movement of so much text into cyberspace doesn't necessarily amount to empty space -- and that's the irony. Like the laptop users upstairs, I now find most of the rich clutter I love online rather than in a building like this.

Outside again, I walked in the drizzle over to the old Stone entrance, which has been glassed-in as a small conference room. A decade ago, this entryway was packed with community boards and messy stacks of fliers. In Glass, I only saw one notice board, and that was up in the children's room. Even that had none of the willy-nilly announcements for yoga classes and baby sitters.

I miss the overflowing shelves of the old children's room, the closer confines that provided more intimacy with the librarians. I'm nostalgic, I admit, strapped to my own memories. I started bringing my son to old Stone when he was a toddler. I didn't care if the kids and moms and nannies were relegated to the basement. We'd sit on that fusty rug with ragged stuffed animals, and at his height, in every direction, he'd see books. He'd grab them and scatter them, as quickly as he now hops sites with Google.

Regardless of what administrators say, the current library aesthetic isn't just about practicality. The new building encourages no creative scattering. It may be a library scientist's dream of control, but it's not mine. How different it would be if that glass box were crammed with books. From the park outside, we'd see far more than emptiness. And maybe we'd come to believe in a vision of information that's not constantly threatening to overwhelm us.