Can tea partiers recall the Senate?

A New Jersey court gives the go-ahead for a recall drive aimed at Sen. Robert Menendez. Who's next? 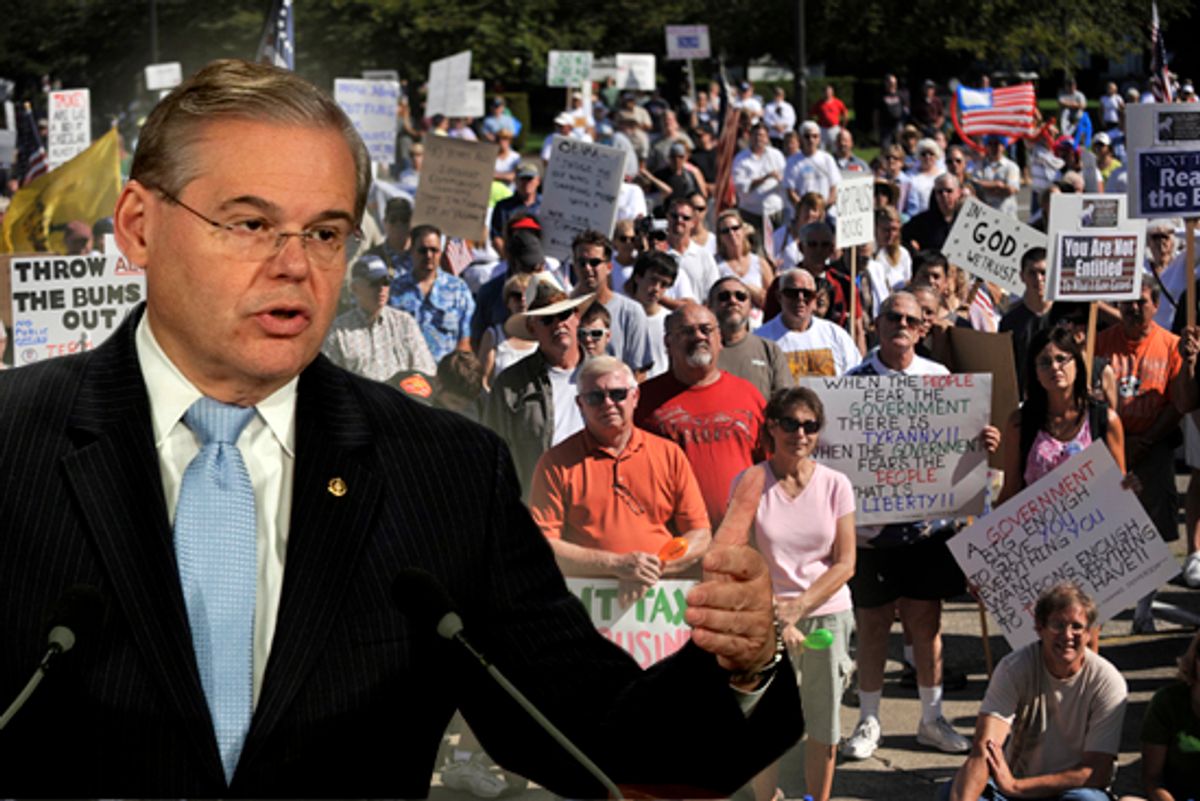 New Jersey took a big step on Tuesday toward reclaiming its spot at the forefront of political dysfunction: A state appellate court has ruled that the Garden State's Constitution supersedes the U.S. Constitution.

Last fall, a group called the Sussex County Tea Party Patriots filed paperwork to begin a recall of the state's junior senator, Robert Menendez. State election officials gave them the cold shoulder because, while New Jersey is one of 18 states that allow recall elections, U.S. senators have long been considered off-limits. Past challenges, such as the 1967 effort against Idaho’s Frank Church, resulted in federal court rulings that the Senate -- and only the Senate -- can expel a member.

The catch: Article 1, Section 2 of the New Jersey state Constitution specifically says that "after at least one year of service, any elected official in this State or representing this State in the United States Congress" is susceptible to recalls.

The tea party group filed suit and the arguments were heard earlier this month. They argued that it's a First Amendment right to recall a senator and that citizens cannot sufficiently express dissatisfaction through an election every six years; they ought to be given more opportunities. Attorneys for the state and for Menendez argued that the U.S. Constitution’s Supremacy Clause essentially invalidates the state Constitution’s language.

This morning, the court ruled that the tea party group could go forward with the collection of signatures. This by no means assures that a recall election will take place. The tea partiers are now faced with the daunting task of collecting 1.3 million certified signatures, one-quarter of New Jersey’s total number of registered voters. So the possibility of Menendez being recalled is vanishingly slim.

Still, the national implications of this ruling could be widespread. Eighteen states currently have provisions for recall elections, and a 19th -- Virginia -- allows for a recall trial.

If they’re energized by today’s ruling, Republicans and other tea party groups could potentially organize in the 11 recall states where Democratic senators aren’t up for reelection this year. Among the Democratic incumbents who fall into this category are Dianne Feinstein (California), Al Franken (Minnesota), Mary Landrieu (Louisiana) and Max Baucus (Montana). Add in Menendez and his colleague Frank Lautenberg and there are a total of 17 Democratic senators who could -- at least in theory -- face a recall vote before the end of their terms.

Then there’s the possibility that Democratic-friendly groups might respond in kind. This could all -- again, in theory -- create a situation in which states with recall provisions vote on their senators as often as they vote on House members, effectively doing away with "salutary check on the government" that the founders intended for the Senate.

"I shall not scruple to add," James Madison wrote in discussing the six-year Senate term, "that such an institution may be sometimes necessary as a defence to the people against their own temporary errors and delusions."

In other words, today’s ruling may end up being New Jersey’s worst export since "Jersey Shore."