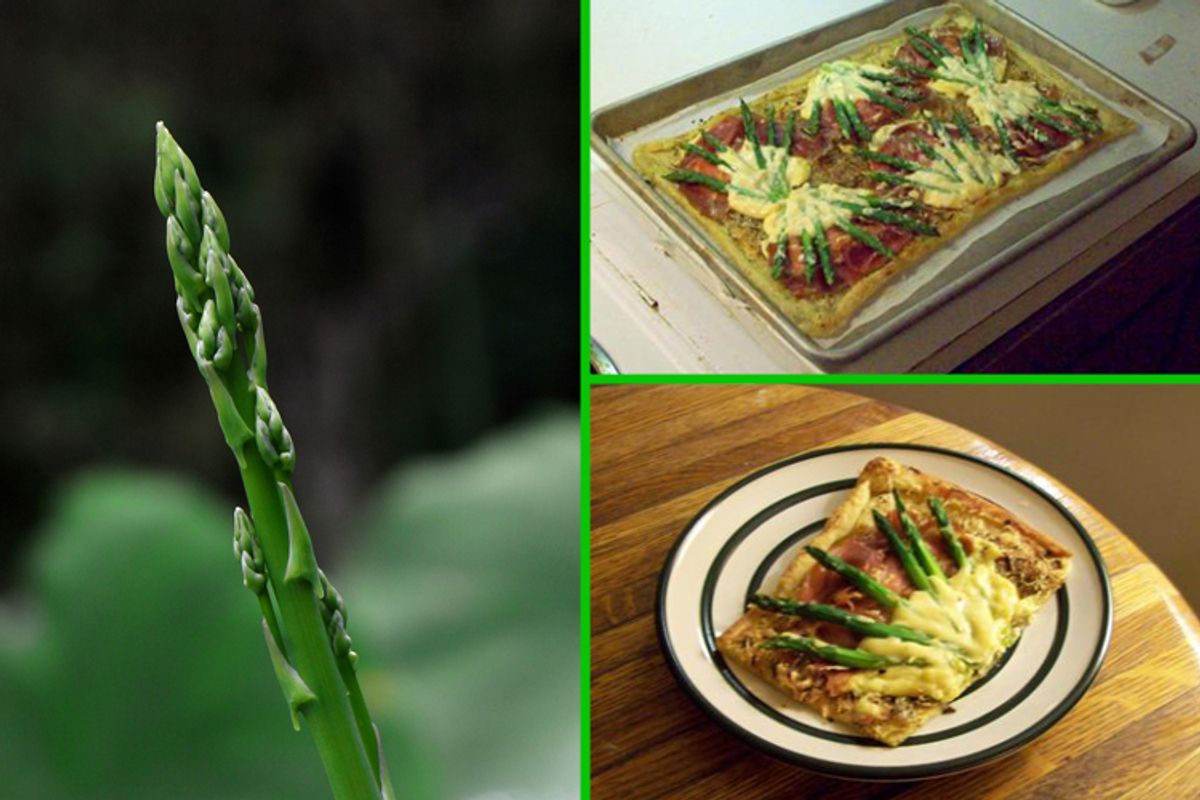 This winning entry for the Salon Kitchen Challenge -- in which we asked readers to come up with their finest springtime asparagus recipes -- comes to us courtesy of Paul Hinrichs. Check out this week's Challenge here.

Back in their heyday, the Who were a visual feast as well as a damn good rock band. Keith Moon destroying his drum kit while Pete did windmill strumming and Roger crooned into the microphone. But there was one figure who seemed detached from it all, almost an afterthought to the orgiastic onstage frenzy. His name was John Entwistle, the bassist, and he was the anchor. Only his fingers moved (and they moved pretty fast). He was the essential pro sideman laying down a solid safety net for a musical trapeze act.

I thought of Entwistle when I thought of asparagus for this week's Kitchen Challenge. It's always off on the side of the plate, maybe pickled or in hollandaise, while prime rib or slices of lamb take center stage and get all the attention. "There's no way asparagus can make it as a solo act," I thought, and gave up. Then I thought of an asparagus tart, and the wispy rhymes of a mental recipe began to form verses.

A tart requires a pastry and a sauce, that's pretty obvious. The first hit on "asparagus tart," was Asparagus Gruyère Tart and the Gruyère immediately brought Quiche Lorraine to mind.

Attempts to visualize asparagus with bacon, the other classic quiche ingredient, also produced too many straight lines to suit me. Now, earlier in the week I'd made some country ham (with red eye gravy), "the American prosciutto," and bulbs lit up on the marquee, spelling out "prosciutto." I just happened to have some in the fridge! It would make a nice color contrast with the green and purple of asparagus.

After a little more research on tart recipes, I decided to just roll out a piece of thawed puff pastry and not even bother making something from scratch.

That settled, I knew I wanted the sauce to be something like custard of quiche, but what I really wanted was hollandaise. That, of course, would never survive in a hot oven, turning into scrambled eggs awash in butter. Maybe something in between could be approximated, like custard with lemon juice and butter and more egg yolks. The lemon juice would be problematic, since it would curdle milk, but then I remembered (from reading "Milk in a Can Goes Glam" in the New York Times) that evaporated milk does not curdle in the presence of acids. Unfortunately, the process of combining all that would involve flying by the seat of the pants since it was just something I made up.

I heated up everything but the butter (which had been melted and was cooling) very, very slowly at first, whisking constantly, almost insanely. I gradually kicked the heat up to medium, whisking my ass off, and checking the temperature frequently. At 150°F, the sauce began to foam and thicken a bit and, by 155°, it seemed thick enough to take on the butter. I transferred the sauce to the bowl of a stand mixer, attached the wire whisk, and fired 'er up to medium speed (which seemed about right after a couple glasses of red wine). I drizzled in the butter. Nothing exploded, so I let it run while I poured myself another glass. It looked "about right" by then. I congratulated myself with a toast, and only one question lingered -- could it stand up to being baked at 400° without disintegrating? (Spoiler alert: It did, but the flavor was neither custard nor hollandaise. Maybe that's what "in between" is. It is buttery and lemony and a pretty darned good sauce -- a keeper, now that I figured out how to do it.)

The classic method of separating tender asparagus shoots from the "woody" stalks, gently bending from the tip down until it has enough resistance to snap, is great but it sure leaves a lot of waste. Weight-wise, the ends represented over half of my $3 asparagus investment. I couldn't just throw them away. I could put them in a stock pot, but at that very moment, the prosciutto marquee lit up again with a new message. "Dehydrate," it said. So I peeled, chopped, blanched (2 minutes), and threw 'em into Excalibur. After 4 hours, they went into the spice mill and netted about 3 tablespoons of powder (from 30 stalks). Not everyone has a dehydrator, I realize, but this worked out very well on the crust with the cheese.

I also peeled the stalks remaining on the shoots, but that isn't necessary; it just looked nicer to me, better than those warty bumps. I blanched the spears for 1 minute to make sure they would be cooked. (I wasn't sure how long they would be in the oven, so I played it safe. I'd also considered broiling the toppings, but that wasn't necessary.)

For the toppings and final assembly:

I found myself picking off a couple of the asparagus spears, dipping them in the sauce, and eating them just like that -- a sure sign that a sideman vegetable had taken over. They even upstage the prosciutto.

About the name: Years ago, I made an onion tart and brought it to work to share. A co-worker came over and asked if he could have a slice of pizza. I told him to help himself, but that it was a tart, not pizza. He asked me to explain and I told him that the crust was puff pastry, not yeast dough, the sauce was a seasoned béchamel, not tomato, that the onions had been caramelized and there was no cheese. None of these distinctions mattered, however, and he simply asked again, "Well, how is that any different from pizza. It looks like pizza."

He had me there, especially since I had started to think of California pizza. The man responsible for blurring the line between a tart and pizza was Spago's founding pizza chef Ed LaDou. Under the tutelage of Wolfgang Puck and later at California Pizza Kitchens, he brought mass confusion to an entire generation and entire nations about what constituted pizza. I'm sure he wouldn't mind my naming an asparagus tart after him. This one's for you, Ed.