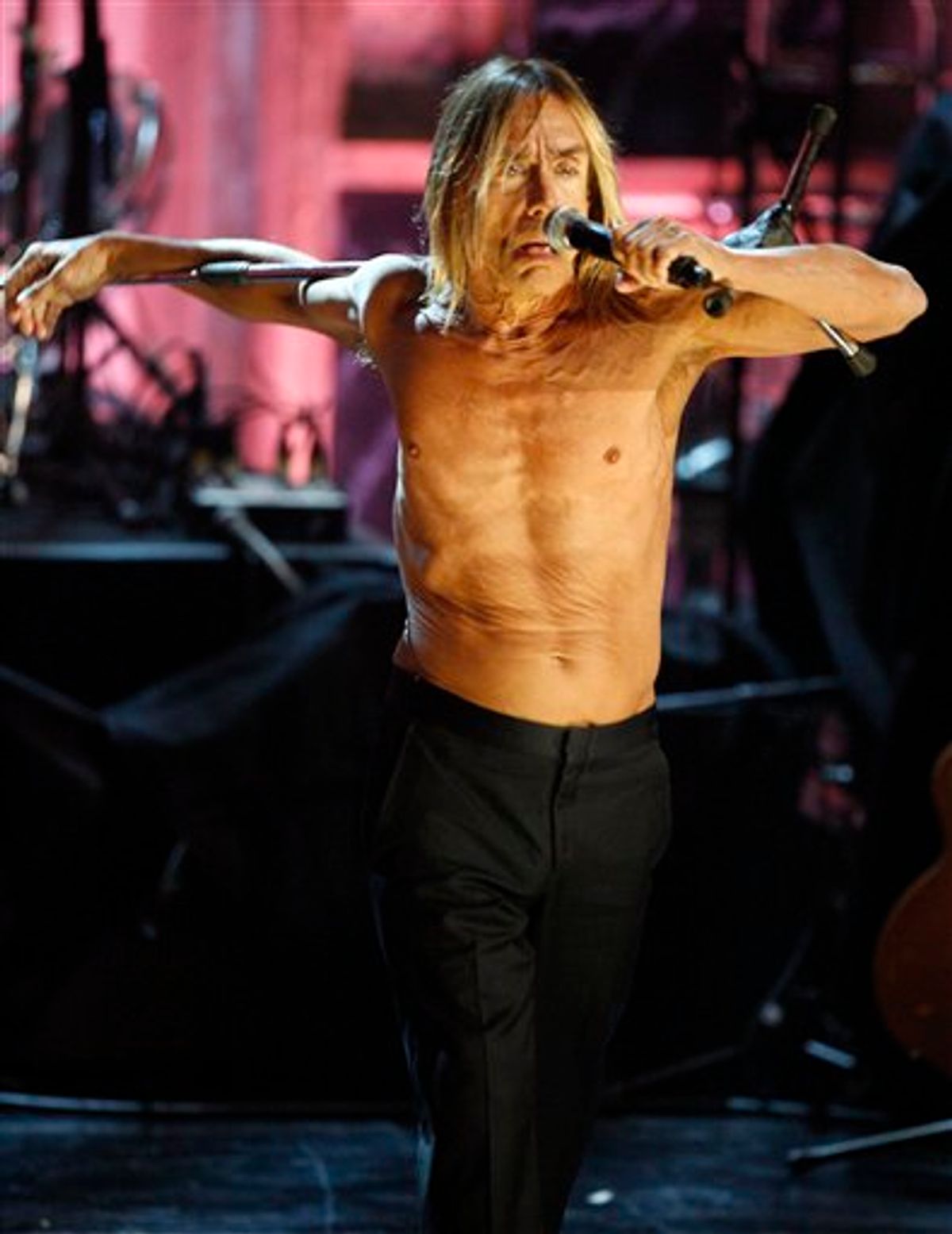 An English band steeped in harmony, a reggae pioneer, progressive rockers who thrived despite a defection, four Swedes who combined their nation's traditions with their rock heroes and a man who prowled a ballroom floor singing "I Wanna Be Your Dog" wouldn't seem to have much in common.

For a night they did, as The Hollies, Jimmy Cliff, Genesis, ABBA and Iggy Pop's Stooges accepted induction into the Rock and Roll Hall of Fame on Monday -- a ceremony almost as notable for who wasn't there as who was.

ABBA sold some 100 million records with hits such as "Waterloo," "Dancing Queen" and "Knowing Me, Knowing You" before disbanding in 1982. Songwriter Benny Andersson described how the melancholy of the "vodka belt" so far north, the pre-rock era music they heard on Swedish radio and the songs of their rock 'n' roll heroes all found their way into ABBA's material.

Andersson and ex-wife Anni-Frid Lyngstad attended the ceremony at the Waldorf Astoria Hotel. Agnetha Faltskog, who has a fear of flying, and Bjorn Ulvaeus, who had a family commitment, did not.

"I'm old enough to admit to the fact that I think we did a great job," Lyngstad said.

Keep that in the past tense: Lyngstad told the audience that ABBA would never perform again. She brought along her grandson, a heavy metal musician who nonetheless appreciates grandma's music. Actress Meryl Streep, who was in the "Mamma Mia" movie that introduced ABBA's music to a new generation and older ones that didn't pay attention at the time, was also there.

The audience at the Waldorf and watching on the Fuse TV network got one-fourth of ABBA on stage. Andersson played piano as country star Faith Hill sang "The Winner Takes It All."

Backstage, Lyngstad feigned anger that it had taken so long for ABBA to be voted in.

"I'm very angry that Madonna got in before us," she joked.

Genesis had two distinct incarnations. They were a fixture of Britain's progressive rock scene in the 1970s, known as much for lead singer Peter Gabriel's theatricality as the music. When Gabriel quit, the band put drummer Phil Collins in front of the microphone and they became regulars on the pop charts.

"Phil's drums were the only thing that could hold those disparate elements together," Anastasio said. "He always seemed to be aware that the song came first."

Phish paid tribute to both Genesis generations, performing the meandering "Watcher of the Skies" and the pop hit "No Reply At All."

Gabriel was missing from the ceremony. Former bandmate Mike Rutherford said Gabriel sent his apologies, but he was preparing for a tour.

Collins, who seemed to be frowning every time cameras caught him, didn't seem to miss Gabriel.

"We've played without him for 30 years," he said backstage. "We're used to not having him around."

Jamaica's Cliff was among the first to export reggae. His best-known songs include "You Can Get It If You Really Want," "The Harder They Come" and "Many Rivers to Cross," and he energetically performed each of them on Monday.

Haiti's Wyclef Jean recalled loving Cliff's songs so much he translated some of them into hymns so his father would allow them to be sung in church. One of his biggest thrills came when, after a recording session, Cliff accepted his invitation to stay over in his New Jersey apartment.

"When we saw Jimmy Cliff, we saw ourselves," Jean said. "Meaning, coming from Haiti and the Caribbean, you have to see someone do it for you to be inspired to think you could do it. When I saw Jimmy Cliff, I could see my face."

The Michigan-based Stooges never sold many records. But the brutal force of their 1973 album "Raw Power" influenced the punk movement to come, and the rubber-limbed Pop was an electric frontman.

Pop delivered middle-finger salutes to his audience and, at the black-tie affair, had his shirt off even before performing "Search and Destroy." He prowled through the audience for "I Wanna Be Your Dog," and the Stooges were joined onstage by inductor Billie Joe Armstrong of Green Day and Eddie Vedder of Pearl Jam.

For all their toughness, the Stooges seemed genuinely touched by the honor. Scott Asheton paid tribute to his brother and bandmate Ron Asheton, who died last year. Pop choked back tears in thanking his colleagues for getting back together and working.

Besides Ron Asheton, some of Monday's inductees died before their special night. They included songwriters Ellie Greenwich and Otis Blackwell, represented by family members.

"You made it, dad," Otis Blackwell Jr. said, looking skyward.

Songwriter Jeff Barry had the most tragicomic reason for missing his big night: He couldn't catch a flight to New York.

"They delayed his plane, delayed it, delayed it and then canceled it. It's an unbelievable drag," said Van Zandt, who read Barry's speech from his smart phone.

Songwriter Carole King inducted old colleagues from an era (the 1950s and early 1960s) when performers largely left songwriting to others. They included Barry Mann & Cynthia Weil ("You've Lost That Lovin' Feelin'," "On Broadway"), Greenwich & Barry ("Leader of the Pack," "Be My Baby"), Blackwell ("All Shook Up," "Don't Be Cruel"), Mort Shuman ("Save the Last Dance for Me," "This Magic Moment" with Doc Pomus) and Jesse Stone ("Sh-Boom," "Shake, Rattle and Roll").

Another non-performing inductee was David Geffen. Before he spread his influence to other parts of the entertainment business, Geffen started the Asylum and Geffen record labels.

The Rock and Roll Hall of Fame and Museum is in Cleveland.