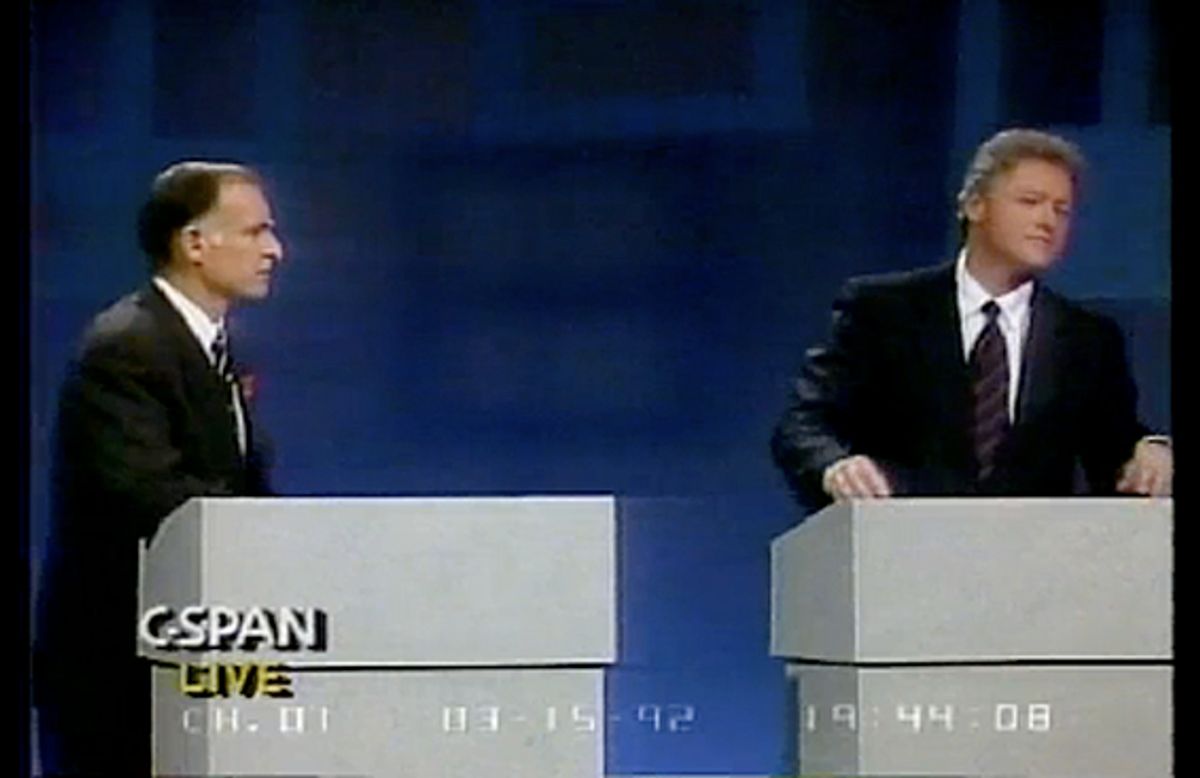 C-Span, as you might have heard, has placed its entire video archive online -- more than 160,000 hours (or 18 ¼ years) of footage, all of it available to everyone free of charge.

For committed political dorks (like me), this is a potentially life-altering development. No more futile YouTube searches for clips from the 1990 Weld-Silber Massachusetts gubernatorial debate or from Tom Harkin’s 1992 presidential withdrawal announcement. It’s all here -- and the video and audio quality is (for the most part) remarkably good.

Needless to say, I’ve only begun to dive into this trove of nerdly pleasure. But already, I’ve managed to dredge up five memorable political moments from the fairly distant past.

NOTE: Many of the videos can't (yet) be embedded. Where this is the case, click on the link to be taken directly to the clip in question. (The videos will be cued up to the right spot.)

In 1987, Pat Schroeder was on the verge of becoming the first woman ever to launch a full-fledged presidential campaign. She traveled the country, raised money and even participated in an early debate. By the middle of September, she was tied with then-Sen. Al Gore for fourth place in a crowded Democratic field.

But the money wasn’t coming in nearly fast enough, and at the end of September, she opted to bow out -- only to choke up as she delivered the news. Her tearful departure became a major story (and the basis for a "Saturday Night Live" impersonation by Nora Dunn) and sparked a debate over sexism in political coverage. Eighteen years ago at this time, Paul Tsongas was a national political sensation, the winner of the New Hampshire Democratic primary and a serious threat to upend front-runner Bill Clinton and claim the Democratic presidential nomination. The source of Tsongas’ appeal was his perceived candor and integrity, a reputation that irked Clinton (whom Tsongas derided as a "pander bear") to no end. That tension set the stage for this memorable debate exchange on the Saturday before the pivotal Colorado primary. Click here for clip It can be argued that Saturday, Sept. 12, 1987, was the day that the religious right officially took over the Republican Party. It was then that Pat Robertson, the quirky televangelist who'd two years earlier claimed to pray Hurricane Gloria away from New York City, scored a stunning victory in the Iowa straw poll.

By besting Vice President George H.W. Bush and Sen. Bob Dole, Robertson demonstrated how profoundly religious fundamentalists had reshaped the GOP base in the 1980s. His straw poll win also foreshadowed his equally surprising second-place finish in Iowa's caucuses five months later -- a development that nearly sank the campaign of Bush (who came in third place).  Click her for clip You probably don’t remember that Bruce Babbitt ran for president in 1988. You may not even remember who Bruce Babbitt is. (He was the governor of Arizona from 1978 to 1987 and later served as Bill Clinton's Interior secretary.)

It wasn't much different back in 1987 and '88. Babbitt, with his awkward speaking style and politically toxic proposals (tax increases and means-testing Social Security), was a media favorite but struggled to stand out among his fellow Democratic candidates. So he came up with this gambit for a nationally televised debate on NBC in December '87. (It didn't really matter in the end; Babbitt finished in single digits in Iowa and New Hampshire and dropped out of the race.)  Click here for clip

5. Arlen Specter runs for president -- and gets six votes What a setting Arlen Specter chose to unofficially launch his campaign for the 1996 Republican presidential nomination!

A June 1994 Des Moines straw poll was the first test of '96 strength. It was also an event dominated by religious conservatives -- the same folks who handed Pat Robertson his straw poll win in '87. And yet Specter showed and warned the crowd that the GOP was in danger of being taken over by the far right. They weren't too happy with him, as this video shows. Bob Dole, who didn't even appear, ended up winning the event with 356 votes. Specter got six. Click here for clip