A St. Paddy's special event: Ice-T and "lady-men" vs. the evil leprechaun -- and a mock-haggis recipe! 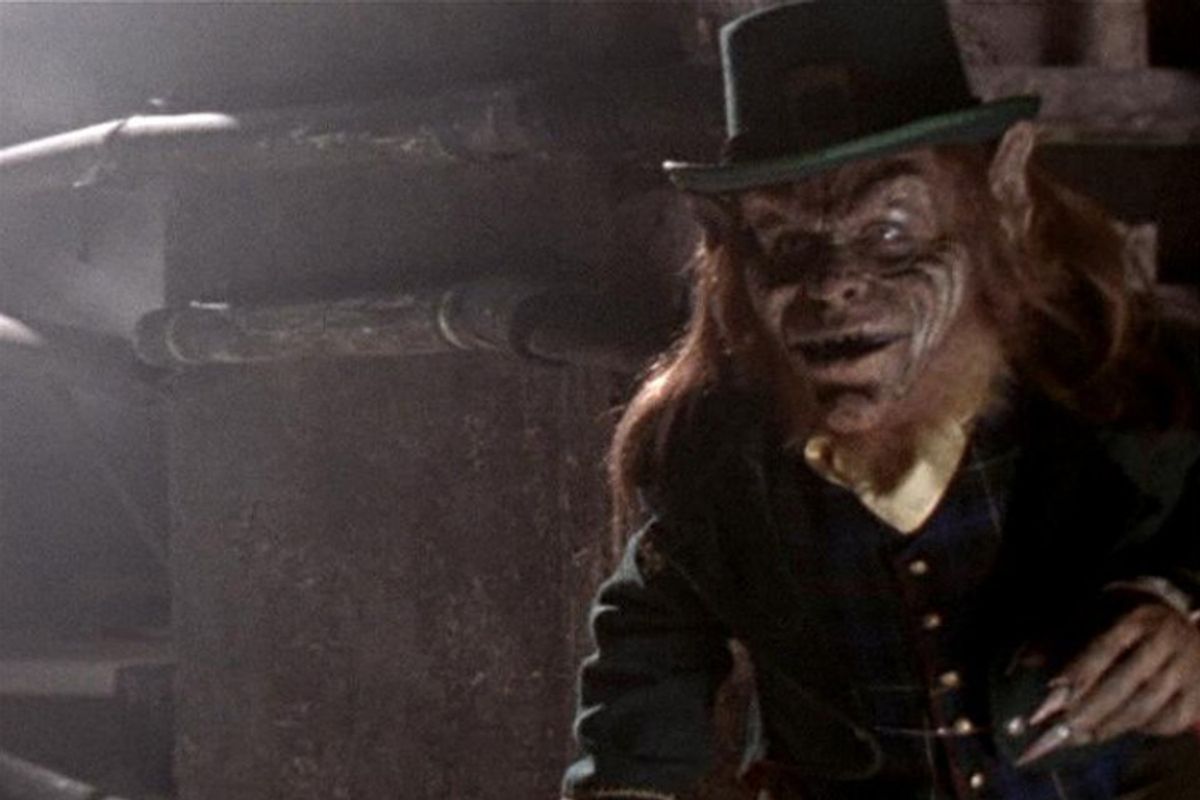 A still from "Leprechaun in the Hood."
--

Me: Hello, this is your daughter.

Mom: Hello, this is your mother.

Mom: Why aren't you saying anything?

Me: I was going to see how long it took you to tell me why you called.

Mom: Smarty pants. I called to tell you to make green brownies.

Me: You psychically know I need brownies?

Mom: No, the Movie Club needs brownies for Wednesday.

Me: Oh, Mom. I don't think the ladies are going to like that movie at all.

Mom: Nonsense. Louise's great-grandson said the movie was for kids. What's not to like about a children's movie about leprechauns?

Me: Maybe it's not the movie I'm thinking about. Let me flip through the free movies and see.

Mom: It's going to be fun. Thelma's making mock haggis.

Me: Hasn't haggis been mocked enough? Here it is: "Leprechaun 5: Leprechaun in the Hood." It stars Ice-T and Coolio. Oh, Mom, I really don't think ...

Me: Mom, I can't imagine sitting through this movie with Miss Thel...

Mom: What!? I already told you why I called.

Me: Mom, do you think you can change the Movie Club to Tuesday so we can have a review for the diary people on St. Patrick's Day?

Mom: I don't see why not. Thelma's already made the mock haggis. She said it was better if it sat a day or so. I'll call you back.

Me: Hello, this is your daughter.

Mom: Hello, this is your mother. Everybody said it was fine to move it to Tuesday if you think the Web people would enjoy our review of "Leprechaun 5."

Me: Oh, I think the Web people would like it very much.

Mom: Love you too.

Me: You actually have paper plates today.

Thelma: Yes, but I hope you brought your own spoon. Haggis isn't finger food.

Mom: I brought her a spoon.

Me: Is that manicotti shells? That's the weirdest looking ricotta I've ever seen.

Thelma: Ha! You can tell you're not Irish. That's oatmeal.

Louise: Thelma, you're not Irish either.

Tansy: You're finished? With what?

Thelma: With talking with you.

Louise: All those countries are jammed up together. Since the shells are from Italy, that balances everything out.

Thelma: Betty's daughter, hand me your plate and I'll give you a haggis tube.

Me: That sounds so delicious.

Mom: That leprechaun looks a little scary. Is he a vampire, too?

Tansy: The language is a little spicy for a kid's movie.

Thelma: I can't understand anything but the cuss words. Just what in the hell kind of kid's movie is this?

Mom: Is that Huggy Bear?

Me: Mom, not every skinny black man in a movie is Huggy Bear.

Mom: That music is horrible. What's that called again?

Tansy: I wonder if I can rap. [clap clap] There once was a man from Nantucket ... something about a bucket ... then a word that rhymes with Nantucket.

Thelma: I'd say that was bad, but it's better than what's in the movie.

Mom: Do you think that Ice-T might be undercover trying to catch the vampire leprechaun?

Thelma: This movie is horrible. We should turn it off.

Me: Think about the diary people!

Me: That's a kind of music style.

Louise: How is that different from rap?

Thelma: I hope they break a hip hopping around. This is awful. Let's turn it off.

Thelma: The only way this is getting better is if the tape breaks.

Mom: Why are they robbing that office without wearing gloves? Don't these people watch any of the CSIs?

Louise: Have you ever smoked marijuana?

Tansy: Why is everyone looking at me? I haven't. I just used cocaine that one time.

Thelma: I found some in my son's room once. I don't see what the big deal was. I decided not to say anything about it. It seemed to keep the boy quiet, though a bit smelly.

Louise: Betty, you and Deven should go to a black church next week.

Tansy: Do all black churches cuss in their hymns?

Me: That's just in the movie, Miss Tansy.

Mom: God is going to punish them for doing that.

Thelma: He already has by putting them in this movie. Why are we still watching this?

Mom: For the Web people. Deven, you said that most people liked to read our reviews when they had already seen the movie. Do you think the Web people have seen "Leprechaun 5"?

Me: Yes. Every one of them.

Thelma: I'm telling you these diary people are some kind of weird perverts.

Louise: That nightclub looks more depressing than this activity room. Did they film this in someone's rec room?

Thelma: We could make a better vampire movie.

Mom: Deven, fast-forward through some of this.

Me: OK, but don't blame me if you lose the plot.

Mom: He's supposed to seduce the leprechaun? He looks like Nell Carter with a beard.

Thelma: That's it? He gets a recording contact because he's now with the leprechaun? What kind of moral is that for a kid's movie?

Tansy: No one turned into a vampire.

Louise: I'm going to give my great-grandson a piece of my mind! What was he thinking giving us that movie to watch? That boy needs to be punished.

Me: I think there might be a few haggis tubes left you can give him.

Thelma: Was that a crack about my haggis? I admit it wasn't my best. I didn't realize I had used the oatmeal with raisins until it was too late.

Let this cool while preparing another bowl of oatmeal (yes, it messes up two bowls, but your fingers will thank you).

Taking the cooled oatmeal, stuff into a tube. Repeat until all your tubes are filled.

Garnish with parsley if you wish, though it's a waste because no one ever eats the parsley.

Dish one tube per person on paper plate.

Wait until cook is distracted, cover haggis tube with paper napkin and shuffle unobtrusively to the trash can. Bury haggis tube under old newspaper.