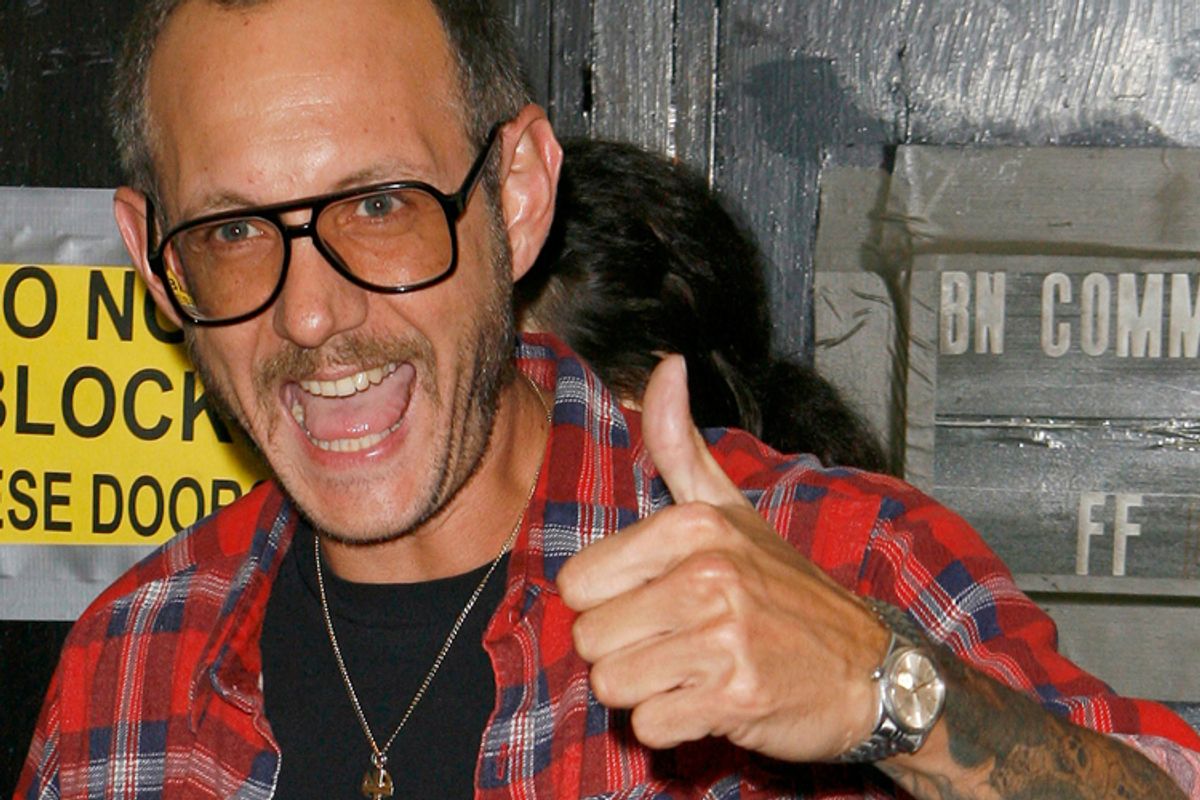 Not much is truly made clear by the recent spate of articles about photographer Terry Richardson -- either a misunderstood genius or a tampon tea-loving predator, depending on whom you ask -- but I've come to a couple of firm conclusions after reading several of them. 1) Terry Richardson has a lot of powerful friends. 2) The fact that so many people seem to like him is quite the faith-in-humanity killer.

According to some models who have worked with him, Richardson is a creep who coerces young women into posing naked and performing sexual favors -- on and off camera -- during photo shoots. Rie Rasmussen, who recently upbraided him at a Paris fashion event, told Page Six,

He takes girls who are young, manipulates them to take their clothes off and takes pictures of them they will be ashamed of. They are too afraid to say no because their agency booked them on the job and are too young to stand up for themselves.

His 'look' is girls who appear underage, abused, look like heroin addicts ... I don't understand how anyone works with him.

So that got people's attention -- but it didn't necessarily change anyone's positive opinion of Richardson. Jennifer Wright at the Gloss noted that other models sing his praises and said, "it's fairly hard to make a call unless you have a model actually saying 'I felt bad about it.'" But then Jennifer Peck -- who consented to give Richardson a hand job during a shoot (after rejecting his offer of tea made from her own used tampon) because she "didn't want to be the killjoy in the room" -- stepped up to say just that. "I modeled for Terry Richardson when I was 19," she writes. "And guess what? I felt bad about it. Of all the fine folks I've frolicked au naturel for, he's the only one who's left me feeling like I needed to take two showers. This man has built his business/pleasure empire on breaking the cardinal rule of asking a young girl you don't know to come over to your house and hang out naked: don't be a fucking creep."

In the Daily Beast today, Jacob Bernstein argues that young women like Peck should have seen it coming; Richardson's work -- which often features graphic sexual imagery, not infrequently involving the photographer himself -- is so well known, it's hard to believe that anyone could show up at his studio without expecting at least to get naked and be propositioned. Bernstein quotes anonymous "fashion insiders" who say things like, "It's just impossible for me to see him as a sexual predator. What he does is completely out in the open," and, "This is an industry filled with crazy people and big personalities. The boundaries are different than they are in a purely corporate enterprise. It's not IBM, it's a business with beautiful girls, sex, and malfeasance. To single out one person as some sort of ringleader is absurd. We traffic in women's bodies."

Oh, well as long as everybody knows it's happening, who could complain?

The women whose bodies are being trafficked, for starters. Model and Jezebel contributor Jenna Sauers offers a few thoughts:

To those who would argue that any nude shoot carries an implied risk of lewd behavior on the part of the photographer, or that models should be aware of Richardson's oeuvre and avoid him if they don't like working in a sexualized environment, I say: Bullshit. Nudity is common in fashion, and when the clothes come off, it doesn't denote a holiday from the responsibilities of maintaining a safe working environment. When I modeled, I shot both topless and implied nude with a variety of photographers -- in fact, my first editorial shoot, for Italian Glamour, was topless -- and never was I sexually harassed on a set. Nor did I expect, or feel that I deserved, to be simply because of the kind of work I was there to do. Instead, I expected those around me to not violate my dignity at work.

The anonymous insider might be right to say Richardson shouldn't be singled out, but I'm pretty sure the argument that there are many unethical fashion professionals doing sketchy things with girls and very young women doesn't actually justify that behavior. A reasonable person might even think that makes it worse -- because it means that those who run the business (hint: not the models) are creating unsafe work environments for people whose careers depend on pleasing them. Which means that even if models do indeed "feel bad about it," they're motivated to keep quiet. As Jenna puts it,

Richardson's immense power within the industry, his long-standing relationships with both influential magazines like Vogue, Harper's Bazaar, and Vogue Paris, and commercial clients like Miu Miu, Gucci, and Sisley, makes it difficult for most working models to openly criticize him. Pointing out the wrongfulness of his behavior risks hurting you more than it will him.

And so agencies continue sending their young charges to castings with him, in the hopes of him giving one a big break. And so magazine editors who would never for a moment consider leaving their teenage daughters alone with someone like Terry Richardson continue booking him for shoots with other people's teenage daughters.

And so people in the industry continue to condone flagrant sexual harassment -- framing it as the expected behavior of "crazy people and big personalities" and the natural consequence of having "beautiful girls" in the workplace -- and claiming the fact that everybody knows it's happening somehow makes it OK. And so people pretend the real issue here is art vs. prudishness, that any objection to Richardson's alleged behavior is about his taking nudie pictures at all, instead of about his getting naked himself and asking the models to get him off while they're on the job. And so Richardson -- for reasons that only become more unfathomable when you read this 2004 profile of him, which reveals a tragic past but also a stunning narcissistic streak ("If he wanted to jerk off, he could always use the mirror, he said") -- continues to have lots of powerful friends.

That's the part I really can't get my head around. I get why he would pull this stuff -- because he can. And I get why young women would keep taking their clothes off for him -- because it could make their careers. What I don't get is why anyone finds this man worth defending. But then, I do have a history of failing to appreciate artistic geniuses, so maybe I'm just the wrong person to ask.