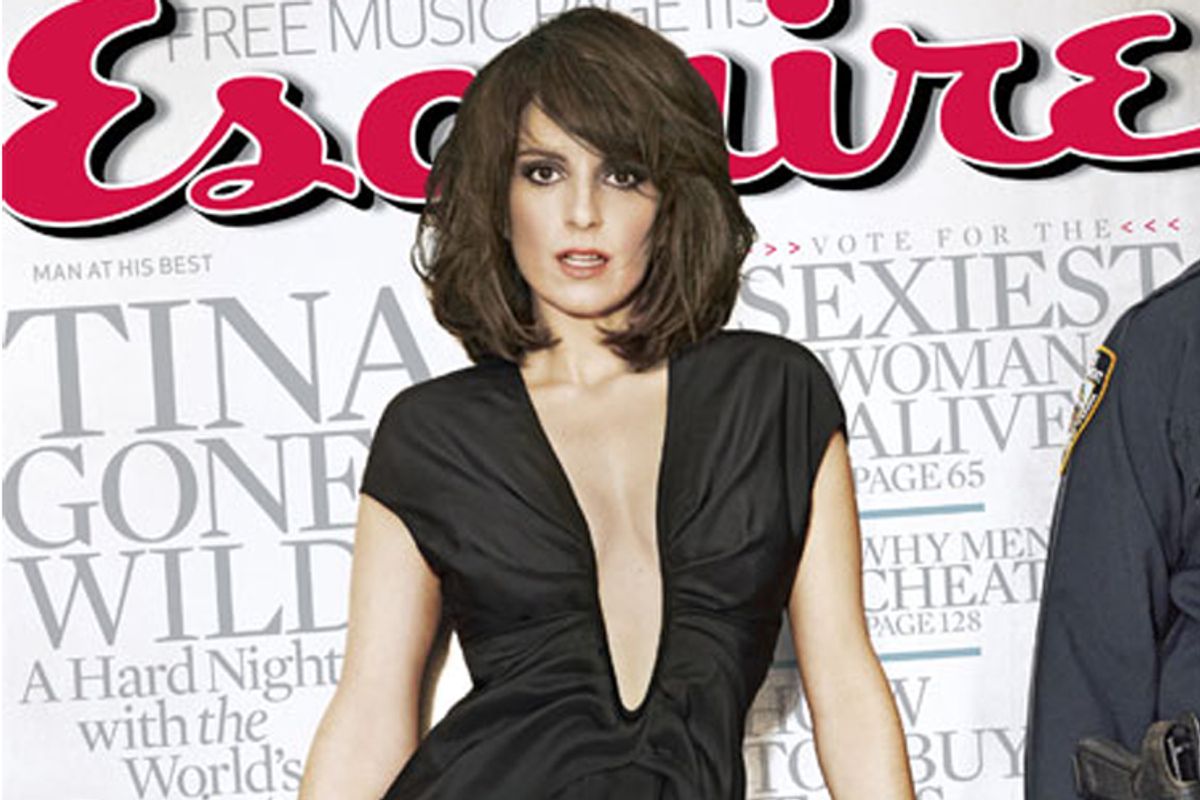 Whoah. Tina Fey has unleashed her inner smoldering sexpot on the April cover of Esquire magazine. She sports smoky eyes, tousled hair and a deep-deep-deeeep V-neck dress. Also: She's handcuffed to a cop and stands alongside a headline that shouts, "TINA GONE WILD." Inside the magazine, she takes part in a drunken romp of a photo shoot: throwing a drink in a bartender's face, drunkenly drawing lipstick across her face, reclining in a bathtub with a bottle of bubbly, holding a friend's hair as she vomits in a toilet and doing her nails while handcuffed to a sleeping policeman.

Paired with her Vogue cover last month, which showed her in a similarly daring neckline, one might think the funny lady was going for an image overhaul. But she preempts any speculation in a comment Esquire published today on its Web site:

The idea of the photo shoot is something like my wild night out. The irony being that I don't do that. I got an e-mail [from Esquire] with a list of the potential setups, and my e-mail back was like, Well, I need to decline being handcuffed to a bed. I won't straddle anyone. I won't make out with a cop. There are certain things, I totally get them as a premise. And they're all good fun, and if I were a young single model, they would be appropriate, but, you know, I'm a mom. And my kid's going to find this someday. I don't want to be handcuffed to a bed in Esquire. What are you nuts? I'm not going to make out with a cop that I'm handcuffed to. I got to get my kid into kindergarten. I guess that's more of a Montessori way of learning, when they handcuff you to things.

Clearly, she's up for some playacting, but she also has her limits. Being handcuffed to a cop? Sure, why not. Drunkenly making out with that cop? Think again, buster. The photos don't do much for me, but I'm hardly in Esquire's target demographic. Thoughts?