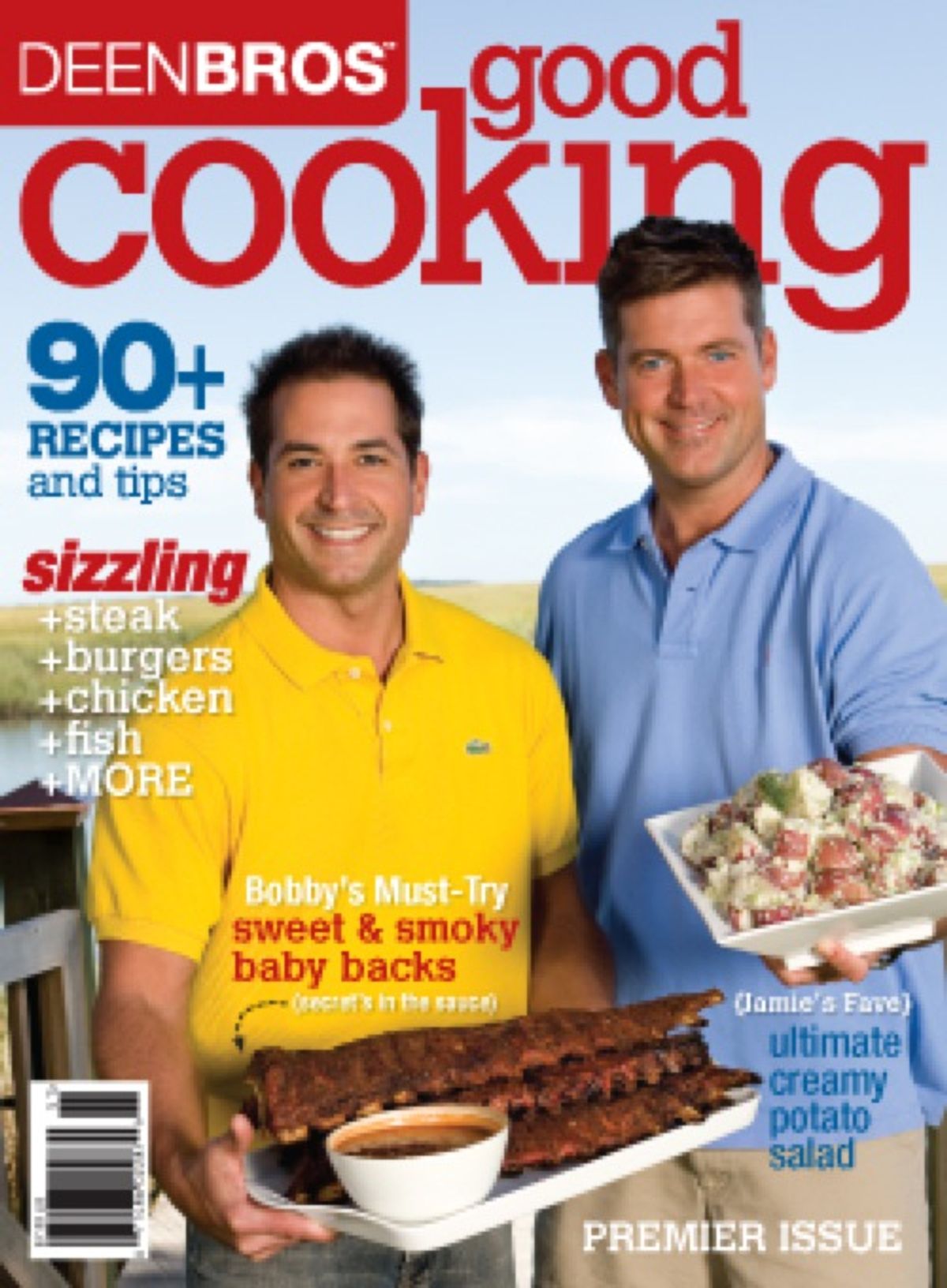 Last week, Jamie and Bobby Deen, polo-shirted sons of Food Network star and flying ham victim Paula Deen, launched their new magazine, Deen Bros. Good Cooking, to great fanfare. The venture, as they told the Fox Business channel, among other outlets, is unlike other cooking magazines being sold in the states. Why? Because it's targeted specifically to men. As the brothers explained to Slashfood, "there's nothing more manly than taking a role in the traditional day-to-day responsibilities that a typical stay-at-home mom handles."

The Deen brothers' concept isn't exactly surprising, since the butchification of the home kitchen has been picking up steam in the last few year. Writing in Britain's Observer newspaper last fall, Tim Lewis coined a new term for the male home cook called the gastrosexual -- a man who, "freed at last from gender expectations … [realizes] that tenderly preparing a meal does not pose a threat to our masculinity." These days, men are responsible for cooking 20 percent of homemade meals (a far cry from 1961, when British men spent an average five minutes a day on cooking and washing up), which may have as much to do with the increasing prominence of food politics as it does with the fact that many of today's young men grew up with fathers who themselves spent time in the kitchen.

And what does this mean? According to Lewis, men's cooking, unlike women's cooking, involves macho showmanship, "elaborate, ambitious, multi-stage feasts," a strict adherence to shopping lists and recipes, and a fascination with formulas (see, for example, the rise of molecular gastronomy). It's not exactly the most convincing of arguments (most of the men I know seem to cook intuitively and practically), but the trend has gained some traction in popular culture.

A decade ago, Jamie Oliver, aka "The Naked Chef," was branded as a bloke counterpart to more feminine and traditional TV chefs (his TV show often involved him making casual meals for his male buddies). Anthony Bourdain, Emeril Lagasse and Guy Fieri are all self-consciously and performatively manly, and the rise of the cooking competition show has helped turn cooking into a new kind of competitive sport (the Food Network's demographic is approximately 40 percent male). Most recently, Eater posted a casting call for a new Food Network show looking for a dudes' dude host, and a German company launched its own cooking magazine for men, the hilariously titled Beef!.

So how butch is the Deen Bros. Good Cooking? Having bought a copy, I can safely report that Anthony Bourdain's masculinity has no reason to feel threatened. In fact, the magazine isn't so much a magazine as a bunch of recipes put together in a magazine format, with a few interspersed images of the Deen brothers doing things in polo shirts: grinning, laughing, looking bizarrely into each other's eyes; occasional Deen brother quotes: "Hearty is the goal with breakfast and brunches"; and some extremely simple cooking tips: "Line baking sheets with aluminum foil or parchment paper." The recipes themselves cover the gamut from sliders to strawberry-orange bellinis.

What emerges isn't a magazine for men so much as a generic recipe book tied to what little appeal the Deen brothers have among conservative suburbanites, whether male or female. The more cynical conclusion to draw is that the Deen brothers are calling their project a "men's cooking magazine" for the sole reason that they think it will create buzz and get them invited onto cooking shows (which, to some extent, has been successful). Which is unfortunate, because a well-done men's cooking magazine does, in fact, have the potential to be interesting.

The high-end cooking world is, after all, disproportionally filled with male cooks worth writing about, and the collision between masculinity and the kitchen is perfect fodder for smart, well-thought-out features written by savvy writers. But then again, even that is beginning to sound passe -- and if men really are making the move into the kitchen, the time may have come to treat smart food readers as smart food readers, no matter their gender.