Dennis Kucinich speaks for me 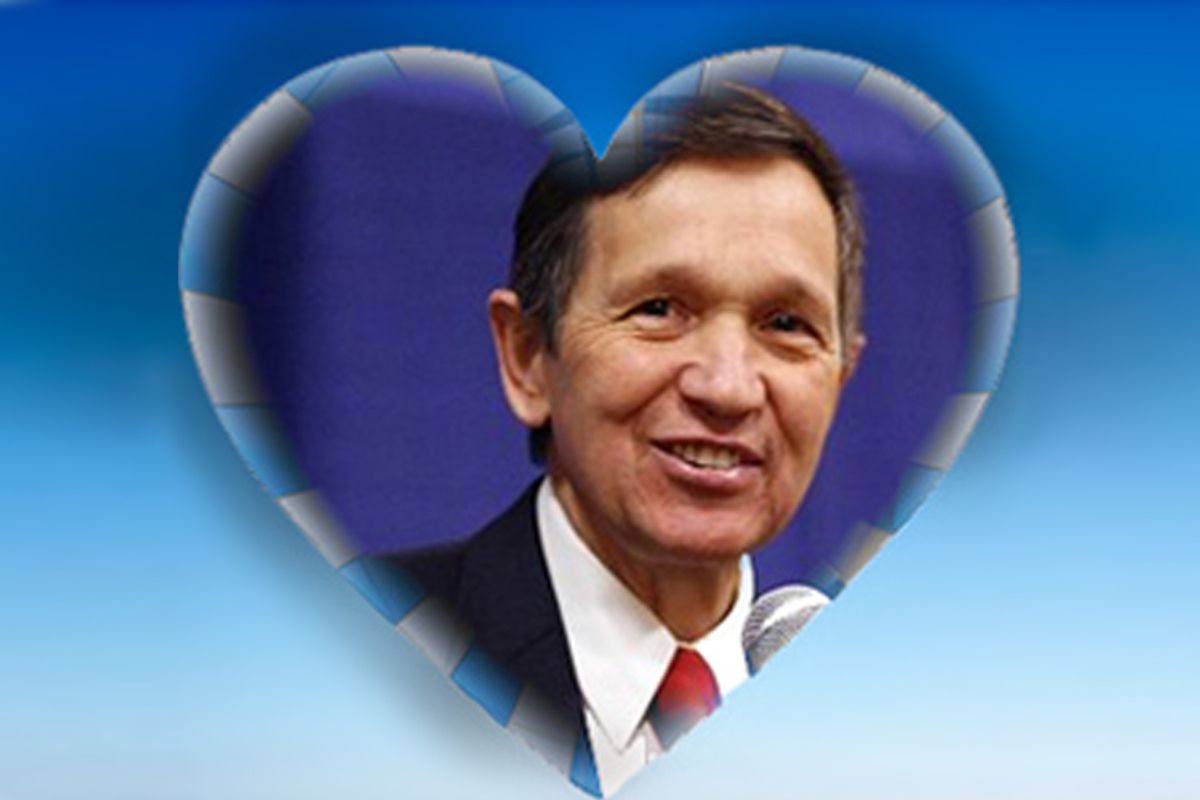 Like a lot of liberals, I'm guilty of not always taking Rep. Dennis Kucinich seriously (even though during the 2008 primaries my views were deemed closest to candidate Kucinich's by this online poll.)  I was on vacation when he took his strong stand against passing President Obama's flawed healthcare reform bill, or else I'd have whacked him for ineffectual lefty grandstanding. But I have to say, when he reversed himself on the bill today, he articulated my reasons for supporting it as well as anyone.

In his remarks this morning, Kucinich sounded concerned, and pained, about the crazed and vicious opposition that the Obama presidency has inspired on the right. "One of the things that has bothered me is the attempt to try to delegitimize his presidency. That hurts the nation when that happens," the Cleveland congressman said, sounding genuinely anguished. "We have to be very careful" that "President Obama's presidency not be destroyed by this debate ... Even though I have many differences with him on policy, there's something much bigger at stake here for America."

Kucinich knows as well as anyone that the president is far from a socialist; he's a centrist corporatist Democrat, and that was clear back when Kucinich stood well to his left during the 2008 primaries. And even though the Cleveland progressive normally avoids partisan calculations about power and opportunity, and votes his conscience and ideology, Kucinich decided to support Obama's healthcare reform plan because right now, partisan calculations about power and opportunity actually serve his left-wing conscience and ideology.

Kucinich understands that there will be no healthcare reform for another generation if this bill doesn't pass. There will be no second Obama term either (and don't dream about lefty primary challenges -- there won't be a Democrat in the White House in 2013 if his name isn't Obama). The only thing worse than being an alleged socialist in American politics is being a weak, ineffectual socialist, and if the president and his party can't get this package passed, despite controlling the White House and a healthy majority in both houses of Congress, they will be rebuked by the voters. And maybe rightly rebuked. What better sign that a party isn't ready to govern?

I've written extensively about my disappointment with Obama and the Democrats, particularly around the healthcare reform plan. He gave Republicans and conservative Democrats too much power for too long, and he sold out early to the insurance and pharmaceutical industry. I don't like the deals Obama made, but he did what he thought he had to do. The left thinks he's wrong; we can prove that when we have a better hold on power. But we won't move the party left by abandoning Obama on healthcare (on detention and secrecy issues, I mostly have abandoned him). Like it or not, Obama is roughly at the party's center; we should work to pull him left. If progressives set him up as a right-winger to try to demonize and defeat him, they will become irrelevant.

This bill isn't perfect, but it will help millions of people. That's why Republicans are fighting it so hard -- and why they decided to fight it before Obama made a proposal (as this profile of Senate Minority Leader Mitch McConnell shows). Right now, I believe, conscience and ideology are served by looking at the political calculations: This bill is the best we can do right now. Obama was the best we could do in a president. A defeat hurts not just Obama, but the progressive movement in this country.

I found myself surprisingly moved by the decision of 60 Catholic nuns, representing 59,000 sisters, to buck the power-mad bishops and come out for the bill today, even as opportunists like Bart Stupak continue to insist it somehow funds abortion. (They made up for the exorcist/moron who blamed the priest/pedophilia problem on working mothers.) The nuns speak for me, too:

The health care bill that has been passed by the Senate and that will be voted on by the House will expand coverage to over 30 million uninsured Americans. While it is an imperfect measure, it is a crucial next step in realizing health care for all. It will invest in preventative care. It will bar insurers from denying coverage based on pre-existing conditions. It will make crucial investments in community health centers that largely serve poor women and children. And despite false claims to the contrary, the Senate bill will not provide taxpayer funding for elective abortions. It will uphold longstanding conscience protections and it will make historic new investments – $250 million – in support of pregnant women. This is the REAL pro-life stance, and we as Catholics are all for it.

In 2010, this is as good as it gets when it comes to healthcare reform. Progressives have to work harder to build support -- real, voting support, not just opinion-polling support -- for our views. (I know people nominally support the public option in opinion polls, but it doesn't yet drive their votes like other issues do.) We can make the healthcare system better after the bill passes, and we can make Congress better. But it will be very hard to do either if Obama and the Democrats lose this one.

(An earlier version of this post included Michael Moore among the progressives who oppose the health care reform bill. Moore reversed his earlier opposition in a letter to fans Wednesday morning, which I missed.)